This is one of many examples that show how far the world has shifted from the paradigm of peace and social justice proposed in Philadelphia after WW2, to today’s concept of 'Total Market' where human beings are like ammunition in a capitalist competition and financial markets are the final arbitrator and supreme legislator of human life. Law Professor Alain Supiot speaks at the International Labor Organization

This is one of many examples that show how far the world has shifted from the paradigm of peace and social justice proposed in Philadelphia after WW2, to today’s concept of 'Total Market' where human beings are like ammunition in a capitalist competition and financial markets are the final arbitrator and supreme legislator of human life. Law Professor Alain Supiot speaks at the International Labor Organization

Declaration of Philadelphia: The Labor Bill of Rights Now Replaced by 'Total Market' 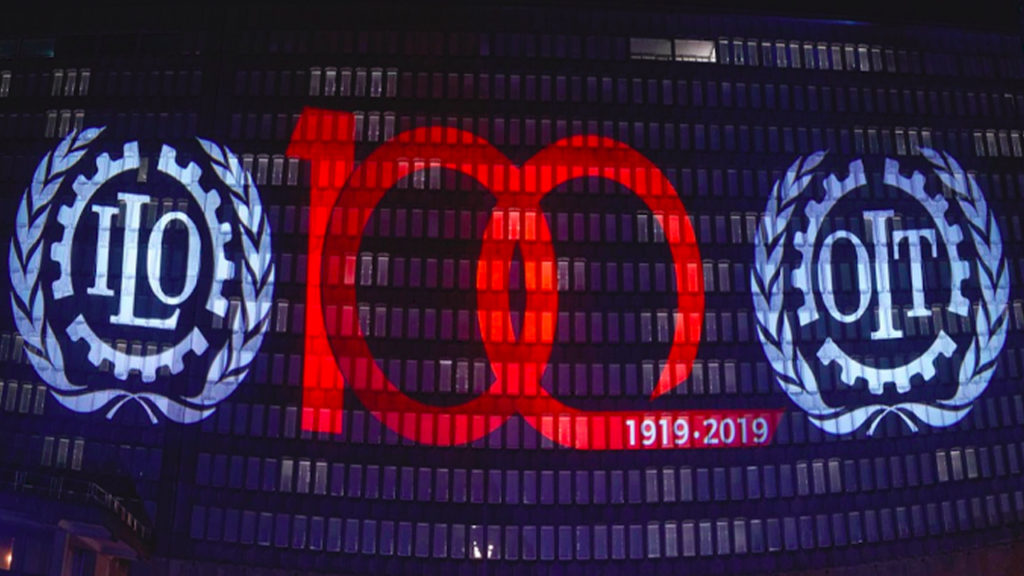 Starting with a brief quote on Supiot’s A legal perspective on the economic crisis of 2008 we go now to our featured clips. <Quote>The 2008 global financial meltdown was the symptom of an underlying crisis in law and institutions caused by the neoliberal utopia of Total Market – “scientific” depoliticization of the economy, full commodification of labor, land and money, and all-out competition, with even legal systems subject to “law shopping”. <End Quote>

ALAIN SUPIOT: I always feel rather moved when I come back to Geneva to this great building, our oldest international institution, born from trauma of the First World War, which led its founding fathers to have inscribed on the pediment above the entrance “there can be no peace without social justice”. And when the Second World War came to an end this maxim was repeated in The Declaration of Philadelphia, not as the expression of a Utopian dream, but as a reflection of the lessons learned from tragic and bloody experience.

When we re-read the Declaration, we might be rather surprised to find that that some of the ideas it contains seem very much at odds with today’s thinking. There would appear to be a complete sea-change in outlook over the last thirty years with the ideas adopted at the end of the war. Let me give you just one example. The Declaration of Philadelphia says that the quality of the legal and financial organization of international relations must be judged by their ability to promote social justice. In other words, legal and financial organization is a means, social justice is an end, and we must constantly assess the ability of economic and financial systems to attain that end. It is clear that for the last thirty years our lives have been governed by the very opposite view, that the market is a spontaneous order and the aim is to adapt the law and institutions to that order.

This way of thinking is embodied in a powerful book by someone who was a lawyer before he was an economist, this was Friedrich Hayek. He explains in his book that politics must be dethroned and replaced by what he calls “limited democracy”, by which he means that we must restrict democratic debate by preventing politicians from talking about the distribution of wealth because, he said, <Start quote> if we open the door to that type of debate there will be no end to it and we will upset the spontaneous order of the market <End quote>. These ideas took off in the USA and UK in the 1980s with what was known as the neoliberal revolution, though I actually prefer the term “ultraliberal”… You could say the success of these ideas dates from the collapse of real Communism. The collapse of real Communism meant that a whole swathe of the elites in the post-Communist countries were converted to these ultraliberal ideas…

If we have to give this sea-change a name – and political scientists might like to give this some thought – we might find it in Article 15 of the Constitution of the People’s Republic of China, which, in an attempt to define the nature of the regime, says that it is a Communist market economy. This is a concept we need to think about because it is the concept which China has chosen to define itself constitutionally. This large-scale political shift allowed ideas to triumph which had been previously restricted geographically & ideologically. I won’t go into detail in describing the huge turnaround that took place but I will look more closely at two ideas.

The first is the program of men like Hayek…This program aimed to dismantle the institutions created by the welfare state, the state social… Hayek had some particularly harsh words particularly about the ILO and The Universal Declaration of Human Rights. What actually happened was not a dismantling. What really happened instead was a process in which welfare institutions were privatized, the most obvious example being the pension systems, and the pressure for pay-as-you-go systems to be funded in order to boost their finances. This is the first idea – that something new is being created and we are not going back to the 19th century.

The second idea – the keystone which was created in the course of these thirty years, is what the book calls “Total Market”. The term “total” is carefully considered here: This is not a word to be employed lightly since it was used to refer to totalitarian states. The use of the word goes back to a German philosopher, Ernst Junger, who wrote an article in 1930 called Total Mobilisation which examines the experience of the First World War. He describes this first experience of massacre on an industrial scale as <Start Quote>a mobilisation of all human, technological and natural resources, which were sent to the battlefield day and night, where an equally bloody maw took over the role of consumer <End quote>.

What he remembers from the First World War, therefore, is the invention of a new style of management of human beings, who become like the ammunition in a competition where everyone is risking his life, and Junger said, <Start quote> the management methods invented during the First World War are still being developed in peacetime <End quote>.

Junger wrote at the time when Chaplin was filming “Modern Times”, in other words, at a time in the industrial world when workers were treated as technical apparatus that had to adapt to machines. We are no longer living in that sort of industrial world, but one of the conclusions drawn in The Declaration of Philadelphia is that we have to reject that type of management, that man is not a material, nor is he capital. The term human capital which is the exact equivalent of Hitler’s human material, was coined by Stalin in a speech in 1938.

So this is why we can talk about “Total Market” today because confidence transformed that period into a spontaneous order which would find its ultimate expression in the financial markets, now the final arbitrator and supreme legislator of human life. Hence – and here the sea-change from Philadelphia is total – the belief that the law and standards are themselves competing products on an international standards market.

As you may be aware, this belief has led to the World Bank’s “Doing Business” program, which ranks national business regulations according to their ability to meet investors’ expectations. It is a sort of self-service tool which provides investors with a convenient way to choose the regulations that suit them best. The employment section of the “Doing Business” program is currently being reviewed following considerable criticism, but that is only one particularly visible part of a broader evolution in private international law called “law shopping”, in other words, the possibility for large firms, now that borders have been dismantled, to choose for themselves the law that they want to apply. Now if there is one thing we can be sure of it is that you cannot have both “law shopping” and the rule of law at the same time. The rule of law applies to everyone. If you let everyone decide which law suits them best, what you get is not the rule of law but a rule of widespread violence.

There are not many certainties in life, the law does not claim to be a science, we do not have the same skills as our economist colleagues, but one thing is certain: because human beings are selfish, violent and vindictive, there has to be a regulatory framework which channels the resources of that violence. If the whole regulatory system is dominated by the fact that everyone is fighting against everyone else, then all you will ultimately have is violence. This is one of the few lessons that we can learn from studying law.

The market is an institutional structure which requires all these different elements:

What made capitalism different from earlier forms of market? This was explained very well by a great socio-economist, Karl Polanyi, who said that capitalism was born when men, land and money were treated as commodities, whereas neither men, land or money are products. For there to be capitalism, there has to be this triple fiction. It is a fiction which is a legal fiction: we pretend that labor is a commodity that money is a commodity with financial markets, and that land and nature are commodities like everything else.

A legal fiction is perfectly all right, but you have to remember that it is a legal fiction and it is only viable, it is only…sustainable if there are legal conditions. For instance, you can treat land as a commodity, but there has to be environmental legislation, you can treat labor as a commodity, but there has to be labor and social security regulation. For the last thirty years, we have been systematically dismantling the legal structures which made these fictions viable. It was always likely that the first to collapse would be the financial markets, because that was where we have been most radical in dismantling the system of rules.

LYNN FRIES To wrap up on our report on Alain Supiot’s public lecture, we close with the rest of the quote from our citation of Supiot’s A legal perspective on the economic crisis of 2008. <Start quote> Financial markets were so successfully deregulated, they were the first to collapse: taxpayers are now paying the bills. But the markets for natural and “human resources” are also at risk. In the spirit of the 1944 Declaration of Philadelphia, the rule of law must be reinstated to end human subordination to economic efficiency <End quote>.

We are going to attach a pdf of that publication by Supiot as a context link in Part 1. In Part 2 of this report, we publish the entire ILO original footage of this featured public lecture by Supiot and its English transcript.

This concludes Part 1 of our program featuring comments by French legal scholar Alain Supiot author of The Spirit of Philadelphia. He’s been professor at the University of Poitier and at the University of Nantes, Professor at the Collège de France, Member of the International Labor Organization’s Global Commission on the Future of Work and author of numerous books including Governance by Numbers. Thank you for joining us on The Real News Network.

Alain Supiot was successively Professor of Law at the University of Poitiers and Nantes, member of the Institut Universitaire de France (2001-2012), before being elected in 2012 to the Collège de France, where he held the chair “The Social State and Globalization: A Legal Analysis of Forms of Solidarity“. He founded the Nantes Institut for…