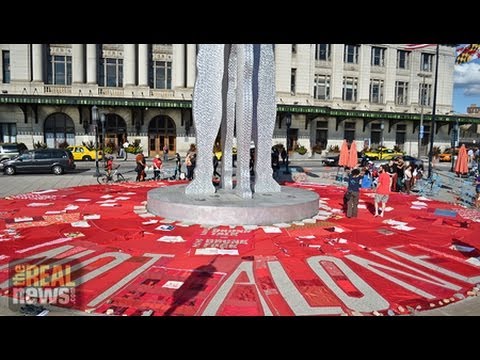 Rebecca Nagle and Hannah Brancato, both artists and activists with the group FORCE: Upsetting Rape Culture, created a mock website called PartyWithPlayboy.com to coincide with the magazine’s annual release of best party schools. The website read:

“Somewhere in the countless hours we spent tallying up co-eds and scoring beer pong, we lost track of the most essential element of the Playboy lifestyle: sexual pleasure. Rape is kryptonite to sexual pleasure. The two cannot co-exist. For our revised party guide to live up to our founder’s vision, we had to put a new criterion on top. Namely, consent.”

As part of their ongoing campaign to raise the issue of consent, especially on campus, on Wednesday they just launched the Consent college issue and Consent Revolution Awards.

Now joining us in-studio are Rebecca Nagle and Hannah Brancato, again, both artists and activists with FORCE: Upsetting Rape Culture.

So, Hannah, before we start talking about your campaign, can you just break down what rape culture is for our viewers and talk about FORCE’s strategy in combating it?

HANNAH BRANCATO, CODIRECTOR, FORCE: UPSETTING RAPE CULTURE: Rape culture includes languages and laws and images that surround us and that make rape seem inevitable and like a problem that can’t be solved. And FORCE’s technique in combating it is to find holes in these systems where we see possibility for change.

NOOR: And so, Rebecca, a big part of that, I’m sure, is the college campus. Talk about why you took on Playboy and their new issue that just came out, and talk more about your ongoing campaign. You just launched part of it today.

REBECCA NAGLE, CODIRECTOR, FORCE: UPSETTING RAPE CULTURE: Yes. So the whole prank started a week ago. We pretended to be Playboy, releasing instead of a top-ten party list “The Top Ten Party Commandments: The Ultimate Guide to a Consensual Good Time”, which were ten tenets of consent and included things like “Thou shalt ask first” and “Thou shalt not take advantage of sloshed persons”.

A lot of people believed the prank, and it went viral last Tuesday. And then people started to report that it wasn’t real and found out that it was us.

And not only was it FORCE that created the prank, but we actually worked with a national network of college students who did organizing on their campuses. They were in on it. They posed for photos. They helped it go viral on social media. And it raised this whole national conversation about consent on college campuses.

What we launched today isn’t a prank; it’s just real. We made this publication, what we’re calling our college issue, a consent magazine that highlights different activist projects that students are doing on their campuses to promote consent and also gives students some ideas and tools about what they can do.

Along with the magazine, we’re actually doing this really cool contest we’re calling the Consent Revolution Awards. And for the next two weeks students at colleges across the United States are going to participate and do different actions and then share their photos on social media. And then if you win the contest, you get a prize pack that includes things like consent tattoos and free condoms. And then also the cool thing is that we have some media partners like ThinkProgress and Bitch Media that are going to publicize the winning campaigns.

NOOR: And can you talk about why you targeted Playboy magazine, especially their college guide? And some of the statistics you hear about rape in college are just mind-blowingly outrageous, like one in four women will be sexually assaulted in college, and going to college actually increases your chance of being sexually assaulted.

BRANCATO: Exactly. So this is a huge epidemic, and it’s a problem that’s not being addressed enough. And as a publication that’s discussing sex, you know, Playboy should be on the forefront of actually promoting what real good sex would be for all people involved, instead of what they’re currently promoting, which is still, you know, a good time for men, and women as accessories to that good time. In their current college guide they actually talk about, you know, women kind of accessorizing a good time alongside food and scenery. So yeah.

So we believe that actually, like Rebecca said, people are really ready to have a conversation about what does good sex and a real, you know, consensual good time look like and how can we actually model that and move forward instead of moving backward and living in the past.

NOOR: And so you two and your organization have been working on this for some time. You won an award last year for your work challenging Victoria’s secret. Talk about if you’ve seen any progress recently on this issue of rape culture and kind of challenging these ideas and stereotypes that are not often really questioned in the media and our society.

NAGLE: Yeah, most definitely. I mean, I think the fact that we’re having a conversation right now about rape culture is something that’s new within the past couple years. Five years ago, people weren’t talking about rape culture. It wasn’t a term. And that’s exciting that there is a growing awareness about the connection between the personal and the political, and the way that we act towards bodies in the media affects the way that those bodies are treated in real life.

The other thing that’s really exciting is that people are getting really smart about how they consume media, how they respond to media, and what consent culture looks like. So the whole Robin Thicke meme of “Blurred Lines”, instead of people just being mad and criticizing about it, there were all of these amazing spoof videos. So people made ones where they swapped the gender roles. People made videos where they talked back to Robin Thicke. My favorite was a “Consent Is Sexy” version, where it was–instead of “blurred lines”, the chorus was “ask first”. So I think in the past couple of years what we’ve seen is not only a growing awareness, but a growing engagement in creating a new culture.

And I think that actually when you look at who’s doing what, college students are the students that are at the forefront. They’re making media, they’re putting it out in social media. And it’s actually these old-school media giants like Playboy that are out of touch and just behind.

BRANCATO: So we’re really interested in audience. We’re not interested in preaching to the choir. We’re not interested in only having the same conversations with people who already believe in these issues. And so that’s why we do the the culture jams, right? So it basically brings this conversation in front of new audiences. With Playboy, we were able to get the attention of at least some of Playboy‘s readership. If you look at the Twitter feed for the past week, we’ve really dominated their handle. And so that’s really important. And the same with Victoria’s Secret. We were able to really capture the attention and the imagination of consumers of Victoria’s Secret products.

NAGLE: And a fun anecdote to what Hannah’s saying: not only did we spoof PartyWithPlayboy.com, but we spoofed some news sites covering it, including this dude blog called BroBible. And they wrote this amazing response to us hacking their website.

BRANCATO: Right away. They were the first people to reply.

NAGLE: They immediately replied with a full-on endorsement, and the article ended in “The world is safe for bros to be feminists too.”

NOOR: Finally, can you tell us about your next project? You’re launching it this weekend.

NAGLE: Yes. So we–this weekend on Sunday we’re doing an installation at the plaza at Penn Station in Baltimore. And it’ll be the first viewing of the Monument Quilt. We’re laying out 100 blankets that contain stories from survivors of rape and abuse, and on those blankets hosting a public picnic. And what the picnic will do is create highly visible public space where the experience of survivors are honored and respected instead of silenced and shamed. And what’s happening on Sunday is part of a larger project that Hannah can speak to.

BRANCATO: So, basically, over the next year we’re going to be collecting more than 6,000 of these blankets. We’re going to be launching a national campaign to collect them. And we’re going to install them in the National Mall next summer. And they’re going to spell affirmative messages to survivors that we believe our culture should be telling them instead of the current messages that we do, so “We will be heard,” “This is not our fault,” “We are not alone.”

And so the event on Sunday is really to gear up people’s attention for this year-long organizing effort. There’s a lot of donations, volunteer time. There’s a lot of exciting things that also are going to be happening as we have workshops across the country to collect the blankets.

NOOR: Hannah and Rebecca, thank you both so much for joining us.

NAGLE: Thank you for having us.

BRANCATO: Thanks for having us.

FORCE: Upsetting Rape Culture is a creative activist collaboration to upset the culture of rape and promote a culture of consent. We believe that a more difficult and honest conversation needs to happen in America to face the realities of sexual violence, and we envision a world where sex is empowering and pleasurable rather than…

Hannah Brancato is a faculty member at the Maryland Institute College of Art. She is the co-founder of Force: Upsetting Rape Culture, a group working to end rape culture and promote a culture based on consent through art actions that generate media attention and get millions of people talking. Brancato is also a member of…