The Jewish National Fund (JNF), that ownes 13% of Israeli lands forbids the sale or lease of its lands to any but Jewish owners. Many are now joining a global campaign against this policy whose roots come from expropriated Palestinian Land. The Real News' Lia Tarachansky looks at the history of JNF land aquisition from the land taken from 1948 refugees in the village of Ma'alul, 1967 refugees on whose land Canada Park was built, and the Bedouins of Al Araqib on whose land the JNF is attempting to build the Ambassador's Forest. Tarachansky speaks to Gadi Algazi, of Tel Aviv University, Aziz Sayah Al-Turi from Al Araqib, Eitan Bronstein from Zochrot, and Haya Noah of the Forum for Co-existance in the Negev.

The Jewish National Fund (JNF), that ownes 13% of Israeli lands forbids the sale or lease of its lands to any but Jewish owners. Many are now joining a global campaign against this policy whose roots come from expropriated Palestinian Land. The Real News' Lia Tarachansky looks at the history of JNF land aquisition from the land taken from 1948 refugees in the village of Ma'alul, 1967 refugees on whose land Canada Park was built, and the Bedouins of Al Araqib on whose land the JNF is attempting to build the Ambassador's Forest. Tarachansky speaks to Gadi Algazi, of Tel Aviv University, Aziz Sayah Al-Turi from Al Araqib, Eitan Bronstein from Zochrot, and Haya Noah of the Forum for Co-existance in the Negev. 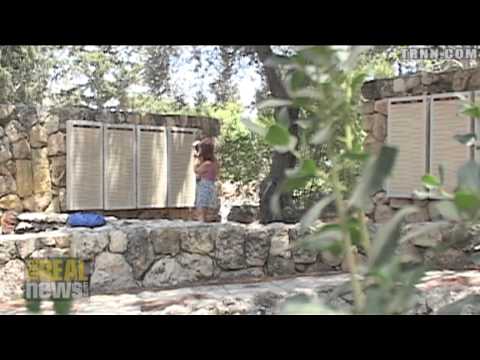 LIA TARACHANSKY, TRNN: Al-Araqeeb is a Bedouin village in the Negev Desert in southern Israel. Since 2010 it’s been demolished more than 30 times, as the Jewish National Fund uprooted hundreds of the village’s trees and dozens of homes to begin planting its own forest. Aziz Sayah Alturi is the son of the sheikh of Al-Araqeeb.

AZIZ SAYAH ALTURI, AL-ARAQEEB BEDOUIN VILLAGE (ENGLISH): This we make oils. This is our job. We had here 4,500 [incompr.] olive trees. It’s a good business.

ALTURI (SUBTITLED TRANSL.): Everything you see here, this whole hill here, it was all trees. There was my house, here the house of Jum’a and others, beside him the house of Ismael, and the house of Sayah, and of Salim. If we were Jews, the government would have honored us for making the desert bloom. But we are Arabs. What can we do?

TARACHANSKY: The Jewish National Fund, also known as the JNF, was founded in 1901 at the Fifth Zionist Congress in Basel, Switzerland. Its purpose was to purchase land for Jewish settlement and forest plantation in historic Palestine. However, by 1948, when the State of Israel was established, the JNF succeeded in purchasing only 6 percent of the land. Over the decades that followed, the territory under its control grew and its role evolved into actively expropriating land for exclusive Jewish use.

ALTURI (ENGLISH): This is JNF.

ALTURI (SUBTITLED TRANSL.): What’s the difference between this year-and-a-half-old tree and the 35-year-old carob tree they uprooted?

SHEIKH SAYAH AL-TOURI, AL-ARAQEEB BEDOUIN VILLAGE: If we leave the territory to go to work–let’s say it’s 7 a.m.–they come, declare this a closed military zone, and forbid us from returning. So we can’t get out. We live here because we don’t have a choice. But even if we die of hunger, we won’t leave this land.

TARACHANSKY: An international campaign against the JNF’s discriminatory practices led to a member of its Washington, D.C., board to quit last week. Writing in The Forward, the board member, Seth Morrison, says: "Some of my earliest Jewish memories involve dropping spare change in the Jewish National Fund’s iconic little blue boxes. I was proud that my money would help plant trees in Israel. The JNF, I knew, was making the desert bloom." But in this project, the Jewish National Fund played a central role in the eviction of thousands of Palestinian families from their homes. Morrison continues to say that "This fall, a subsidiary of the Israeli branch of [the] JNF launched eviction proceedings against the Sumarin family, who live in the Silwan neighborhood of East Jerusalem." But East Jerusalem is only a small part of the JNF’s role in land expropriation from Palestinians. In the Negev Desert, the fight against the JNF brought together Jewish and Bedouin residents to defend Al-Araqeeb. Haya Noah is the executive director of the Forum for Co-Existence in the Negev. Here she describes how the JNF works to take over the village’s lands and dozens of other Bedouin communities.

HAYA NOAH, FORUM FOR CO-EXISTENCE IN THE NEGEV: We are in midst of litigation process. And still the JNF is working as the land belongs to the state, just changing all the ecology here, all the landscape, as you can see. The JNF is actually Judaizing the area by the trees, because–.

TARACHANSKY: What do you mean by "Judaizing"?

NOAH: Judaizing is controlling. And they are saying this with no shame–you know, we are going to control the land in order for Arabs not to control it. You know?

TARACHANSKY: Gadi Algazi is a historian. Here he speaks in Tel Aviv about the history of the JNF and land acquisition in Israel.

PROF. GADI ALGAZI, HISTORY DEPARTMENT, TEL AVIV UNIVERSITY: The story of land in Israel is fascinating, but there are two laws, again, almost none of Israeli citizens, certainly none in my daughter’s class (she’s now 17), has heard of. The first law is, of course, the law of 1949 regulating the possession of the Palestinian refugees.

TARACHANSKY: The Absentees Property Law confiscated all the property and land of Palestinians who fled or were expelled in 1948, including, in some cases, internally displaced refugees who later became citizens of Israel. During the War of 1948, when Israel was created, two-thirds of the Palestinian population became refugees, most of whom are today in Lebanon, Syria, Jordan, the West Bank, and Gaza. They were never allowed to return. The Absentee Properties Law transferred their land to a custodian, which either sold or gave it to Jewish owners.

ALGAZI: Ben Gurion’s idea in June 1949 was to circumvent any future action by simply selling–absolutely illegally–selling the land entrusted to the custodian to some third party, so that the state of Israel, in case of an international debate, can safely say, sorry, you know, like any bicycle thief in the streets of Tel Aviv, sorry, it’s not in my hand anymore. So within a few days, 1 million dunam was sold to the JNF. It took about eight days to realize one of the biggest deals, business deals in the history of Israel, for a price well below their value. And the nice thing about it is that the JNF never even paid for most of this land.

TARACHANSKY: The government then reached another agreement with the JNF, where it would be subsidized to build infrastructure on the land in exchange for securing it for Jewish settlements and forestation.

ALGAZI: So, all in all, the JNF has acquired from the land of the refugees, not from its owners but from the custodian, 1,300,000 dunams. And they remain to this very day the property of the JNF. And it applies to this property, which is Palestinian property, the rule that the land cannot be leased or sold to Arabs.

TARACHANSKY: One such example is the village of Ma’alul in northern Israel. Its lands were transferred to the JNF and its Palestinian inhabitants were expelled. In a tour, the Israeli organization Zochrot that works to commemorate the history of 1948 brought together the refugees and their descendents.. Here, refugees from Ma’alul place a sign marking what was once the entrance to their village. Israeli expulsion campaigns against the Palestinians didn’t stop in 1948. They continued throughout the ’50s and ’60s. And during the 1967 War, 300,000 Palestinians were again made refugees. In the Latrun area on the outskirts of Jerusalem, three villages were forcibly expelled. Their residents fled to the West Bank and the village lands were transferred to the JNF. Raising funds from Canadian-Jewish philanthropists, the Jewish National Fund built Canada Park on the site, a history Zochrot is fighting to commemorate.

EITAN BRONSTEIN, ZOCHROT, ISRAELI NAQBA EDUCATION GROUP (SUBTITLED TRANSL.): There are signs in the park that explain the history of this place, but it didn’t mention, until Zochrot didn’t act… basically forced the JNF, through the Supreme Court, to mention these villages. The JNF history didn’t mention them at all. It only mention other histories, like the Roman, Byzantine, Ottoman, Jewish. When they started building this park, one of the refugees from Beit Nuba, which is one of the destroyed villages, found out about it and began writing letters to the newspapers and turning to leaders, and he succeeded in meeting with one or two, if I’m not mistaken. In the midst of this public scandal, one of the things the JNF did was to send him a plaque, a sort of honoring paper. I have it. It’s just a simple piece of paper that says that the JNF planted a tree in his name, Ismayil Zayid, in Canada Park.

TARACHANSKY: Today, Palestinians are fighting the JNF in Israel, East Jerusalem, and in the West Bank, where it operates under a subsidiary called Hamuta. It is this daughter company that works to evict Palestinians in East Jerusalem using another law passed shortly after the â€˜48 War.

ALGAZI: Number two is another piece of legislation that shapes our lives here. And this is the law from 1952 and 1953. It simply said that whoever was not on his land or her land on the crucial date April 1953 was not cultivating it at this crucial date. The land can expropriate this land for reasons of, for purpose of development, security, or settlement, without even notifying the legal owners. Whereas the first flaw pertains to the refugees, the second law pertained to Palestinian land of Palestinian citizens of Israel. Now, if we just managed to dissociate them, even temporarily, from the land for the important and crucial phase, you could just take it and that’s it.

TARACHANSKY: In 2007, the Israeli human rights group Adulah filed a petition to the Israeli Supreme Court. It argued that JNF’s policy of leasing land it took from Palestinians for Jewish-only use is discriminatory. Specifically, it referred to a part of the JNF lease regulations that say, "… the land could not be leased to a non-Jew, nor could the lease be sub-leased, or sold, or mortgaged, or given, or bequeathed to any but a Jew… Non-Jews could not be employed on the land or even in any work connected with the cultivation of the land. Violation of this term of the lease rendered the lessee liable for damages to the lessor." In its response to the Supreme Court petition, the Jewish National Fund stated: "The JNF was established and functions solely for the benefit of the Jewish people… the JNF is not obliged to act equally towards all of the citizens of the state in the allocation of lands." A decision hasn’t yet been made whether to change the regulations. The fight Al-Araqeeb and residents of East Jerusalem are waging is now part of a global movement. Many, for example, are questioning the JNF’s charitable status in countries such as Canada and the United States. For The Real News, I’m Lia Tarachansky in Tel Aviv.