U.S. covering up reality in Honduras

While State Department attempts to sell the world that the inauguration of a new president in Honduras has brought an end to the country's crisis, the continuing assassinations of anti-coup activists and their children stands as sharp evidence to the contrary. Video includes interviews with Father Ismael "Melo" Moreno, director of Honduras' Radio Progreso, and Adrienne Pine, anthropologist from American University and Honduras expert.

While State Department attempts to sell the world that the inauguration of a new president in Honduras has brought an end to the country's crisis, the continuing assassinations of anti-coup activists and their children stands as sharp evidence to the contrary. Video includes interviews with Father Ismael "Melo" Moreno, director of Honduras' Radio Progreso, and Adrienne Pine, anthropologist from American University and Honduras expert. 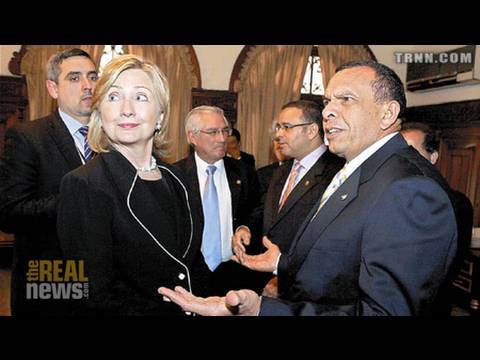 JESSE FREESTON, PRODUCER, TRNN: Since the inauguration of Pepe Lobo as the president of Honduras on January 27, the US State Department has been the new government’s most vocal supporter, urging the region to follow the US lead in restoring relations with the Honduran government, relations that were largely cut after the military coup of June 2009. Secretary of State Hillary Clinton made Honduras one of her top priorities on her recent tour of Latin America.

HILLARY CLINTON, US SECRETARY OF STATE: We think that Honduras has taken important and necessary steps that deserve the recognition and the normalization of relations. Other countries in the region say that, you know, they want to wait awhile. I don’t know what they’re waiting for, but that’s their right, to wait.

FREESTON: Among the countries not recognizing the Lobo government is Brazil, whose representative spoke out against the US at the Organization of American States (OAS).

RUY DE LIMA CASÃES E SILVA, BRAZILIAN AMBASSADOR TO OAS (SUBTITLED TRANSLATION): No miracle has taken place between November 29 of last year (election) and January 27 of this year (inauguration). The human rights situation in Honduras is very serious, as is reflected very adequately in the recent report by the Inter-American Commission on Human Rights.

FREESTON: That report confirmed in the month of February alone more than 50 illegal detentions, eight cases of torture, two kidnappings, and two rapes, all carried out against members of the coup resistance. It also highlighted some of the recent political assassinations. Honduras analyst Adrian Pine led the American Anthropological Association to vote to reject the Lobo government and condemn recent human-rights violations.

ADRIENNE PINE, PROF. ANTHROPOLOGY, AMERICAN UNIVERSITY: Yeah, a lot of people think that since Pepe Lobo is in power that there’s been some kind of resolution to what they’re calling the crisis in Honduras, which is, of course, a military coup that led to a de facto military government which has been killing people right and left since last June. None of that has changed. If anything, it’s intensified since Pepe Lobo has come to power. We’ve seen over ten people killed since Pepe Lobo was put in power, and no word from him in terms of voicing concern about the deaths of these people who are peacefully resisting the violent military-controlled regime that he now stands at the head of. We’re seeing the same tactics that were used by Battalion 3-16, which was the infamous death squad in the 1980s. This was a battalion whose members were trained by the CIA, many of whom also went to the School of the Americas [now the Western Hemisphere Institute for Security Cooperation] for training and torture techniques. And the same techniques are being used today: people are being disappeared; they’re being tortured; they’re being assassinated, executed; they’re having their hands tied behind their back. It’s hard to quantify the horror. But what’s particularly horrifying, I think, is that children of resistance leaders—and, again, nonviolent resistance leaders—are being targeted and assassinated to send a clear message to people to cease their peaceful and democratic resistance. Among the people who were assassinated was Claudia Brizuela, who was murdered in her own home. She’s the daughter of a very important resistance leader, Pedro Brizuela.

FREESTON: The 36-year-old Brizuela was shot dead in front of her two children, ages two and eight. The Real News spoke to Father Ismael "Melo" Moreno, a Catholic priest from the Honduran city of El Progreso and director of the radio station Radio Progreso. Father Melo was in Washington, DC, to counter the US State Department message.

FATHER ISMAEL "MELO" MORENO, DIRECTOR, RADIO PROGRESO (SUBTITLED TRANSLATION): The actors and the dynamics that gave rise to the coup d’état didn’t do so just to stick around for a short time. Rather, these were political maneuvers for the long term. Two thousand and nine was only the start of a process we’re calling a coup under construction.

FREESTON: Father Melo’s radio station was raided and shut down by the military on the day of the coup. It was one of the few outlets that was reporting on the overthrow of President Manuel Zelaya. In the following months, many of the journalists [inaudible] were threatened, and one was kidnapped and tortured. While the US State Department says that those days are in the past, Father Melo doesn’t agree.

CLINTON: We believe that President Lobo and his administration have taken the steps necessary to restore democracy and the—.

CLINTON: We believe that the free and fair elections, which have elected a new president in Honduras, means it’s time to turn the page.

PINE: Pepe Lobo came to power in a completely illegitimate election under militarized circumstances, in which freedoms of speech and assembly and the press had been all suspended, in elections that were marked by violence.

FREESTON: These conditions gave rise to a mass resignation of candidates, including anti-coup presidential candidate Carlos H. Reyes, who resigned after police and military repeatedly attacked attendees to his public events. On one occasion, he and over 100 others were violently detained, leaving Reyes with a broken wrist. Normally election observers would have documented these abuses, but the Honduran elections had no official international observers. The EU, OAS, UN, and Carter Center, the world’s big four of election observation, all refused to participate.

CLINTON: The election which was held was by all observers found to be free, fair, and legitimate.

FREESTON: US Ambassador to Honduras Hugo Llorens cited the State Department itself, along with two organizations it funds, the National Democratic Institute and the International Republican Institute, as his sources during a presentation in Washington in January.

HUGO LLORENS, US AMBASSADOR TO HONDURAS: —that this process was a free, fair, and transparent process. In fact, I’ve been associated with Honduras for a very long time, and I would argue they’re probably the freest, fairest elections ever held in Honduras. The Honduran people turned out in large numbers.

FREESTON: The election was boycotted by those opposed to the coup. As The Real News reported in the days following the election, the Honduran electoral tribunal consciously misrepresented their own data to inflate the turnout numbers. This story has since been confirmed by numerous outlets, including CNN and AFP. The inflated turnout number was repeatedly referenced by Washington and others to suggest a majority of Honduran saw the election as a way out of the crisis. Ambassador Llorens did admit, however, that the elections took place under an abusive regime.

LLORENS: —that since June 28 there was a significant deterioration in the human rights situation in Honduras. You know, we’re talking about, you know, arbitrary detentions, arbitrary searches of homes, excessive use of force on a number of occasions, been beatings of detained protesters, closure of media outlets. That’s very worrisome. Intimidation of journalists. And I’m again very proud to say that no country—rest assured—no country has done more on the ground in Honduras in support of monitoring human rights, investigating scores of human rights cases, raising concerns about human rights violations and urging the authorities to investigate the allegations. And we will insist that those people who were responsible be held accountable.

FREESTON: In the days following his presentation, the US supported the passing by the Honduran government of a general amnesty law that protects those responsible for the coup from prosecution. As for the truth commission, the State Department believes it should not have the power to punish the human rights violators.

LLORENS: The truth commission doesn’t have to be a blame game. It can be part of the process of national reconciliation. It can be part of the process of Honduras re-engaging with the Inter-American system, re-engaging with the OAS, and telling a story, and chronicling what happened. And from there, again, without making it a blame game, you can come up to specific recommendations to the new Lobo administration on what it will take to make sure that something like this doesn’t happen again, you know, and to make sure that you can strengthen democracy.

PINE: This truth commission takes place while assassinations are still going on. It takes place while nothing has changed politically in Honduras, while the people who violated Honduran democracy are being rewarded for doing that. And this is a part of rewarding them. It’s being put there in place of any sort of justice, not as a complement to it.

FREESTON: The two key leaders of the coup and the repression that followed it, military leader Romeo Vasquez Velasquez and civilian leader Roberto Micheletti, have both been rewarded for their actions. Vazquez was named by President Lobo to head the state telephone company, this after it was Vasquez’s military that sent out a letter to all the mayors in Honduras one month before the November election demanding contact information for all members of the coup resistance in each community. So it is troubling to many in Honduras that a military with a recent history of seeking intelligence on politically active Hondurans is now in control of the country’s telephone infrastructure. Meanwhile, Micheletti has been named as a congressman for life, a position that does not exist under the Honduran Constitution. As for references to a government of national unity, not one person who boycotted the election holds a position in the new Lobo administration. As Secretary Clinton left on her recent tour of Latin America, nine US members of Congress wrote her a letter. They asked that she condition the renewal of military and economic aid to Honduras on a commitment from the Lobo administration to begin prosecuting crimes committed against members of the coup resistance. Clinton never responded to their letter, choosing instead to send one of her own.

CLINTON: I have just sent a letter to the Congress of the United States notifying them that we will be restoring aid to Honduras.

FREESTON: The US has been joined by numerous other countries, as well as the World Bank, IMF, and Inter-American Development Bank, in normalizing relations with Honduras. But if the evidence goes against the stated reason why the State Department is supporting the Honduran regime, what does explain the support? In part two, we explore how Honduras fits into the US strategy for the hemisphere.