Honduran campesinos under the gun Pt.2

In Part two of two on the land conflict in the Aguán Valley, we look at the roots of the conflict, and the motivation for the campesinos to begin the land occupation that eventually won them 11,000 hectares. We also look at what the experience in Aguán means for other conflicts in a country where the power struggle that gave rise to the June 2009 coup is far from over.

Including interviews with Father Ismael "Melo" Moreno, Rosemary Joyce, and reporting from the land occupation in question.

In Part two of two on the land conflict in the Aguán Valley, we look at the roots of the conflict, and the motivation for the campesinos to begin the land occupation that eventually won them 11,000 hectares. We also look at what the experience in Aguán means for other conflicts in a country where the power struggle that gave rise to the June 2009 coup is far from over.

Including interviews with Father Ismael "Melo" Moreno, Rosemary Joyce, and reporting from the land occupation in question. 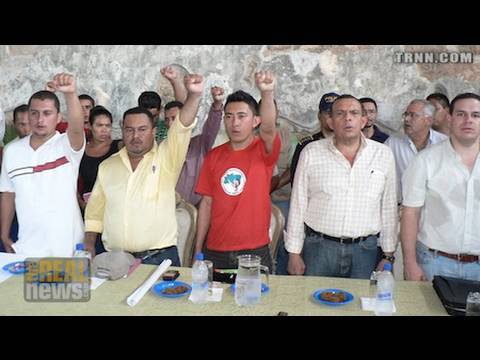 JESSE FREESTON, PRODUCER, TRNN: In part one we described the landmark deal negotiated by the campesinos of the lower Aguán, despite the ongoing militarization of their communities. Land conflicts in the Aguán region are not new. Regular occupations by landless peasants in Aguán and elsewhere in Honduras during the 1970s forced the military dictatorship to enact land reform that granted five hectares to each family under the condition that they grow crops for export, such as sugar, fruit, and palm, and sell their products to predetermined buyers.

ROSEMARY JOYCE, PROF. ANTHROPOLOGY, UC BERKELEY: The land reform laws of Honduras were radically changed in the 1990s, so that land that had been held by campesino groups could be sold off individually. And this led to a period in which many people, who were forced into poverty by the poor market for the goods they were being asked to grow, did exchange some land for money or abandon the land.

FREESTON: The campesinos accused much of their leadership in the early 1990s of corruption in selling their collective land to the business moguls.

UNIDENTIFIED (SUBTITLED TRANSLATION): I deeply regret that some bad Hondurans thought it a good idea to sell the land. Unfortunately, the women weren’t even consulted. They didn’t even tell us when the sale was going to be.

UNIDENTIFIED: We had better living conditions back when we had our own land. It’s sad to see some mothers sitting at home, when our kids face such a tough situation that forces them to migrate to other countries, prepared to die, just find a new life where they’re treated like dogs, because the life our kids lead abroad is not an easy one.

FREESTON: But they want more than just a return to the arrangements of the past. They want autonomy to grow what they want and sell it to whoever they want.

FREESTON: After ten years of fighting to get the land back, the most recent occupation has won the campesinos a deal promising them roughly half the land that they won in the 1970s, but this time without conditions on what they grow and who they sell it to. Catholic priest and radio director Father Ismael "Melo" Moreno stresses the importance of land ownership in Honduras today.

FATHER ISMAEL "MELO" MORENO, DIRECTOR, RADIO PROGRESO (SUBTITLED TRANSLATION): The campesinos and their worker organizations are identified by the business and political elites as a threat, or even an enemy, of their stability and their conception of society, state, and government. They never achieved a land distribution that you might call a countryside without campesinos, a countryside for the agroindustrial projects, a countryside for the interests of national and multinational investors, where campesinos are just cheap labor—not citizens with the right to more than a job, but to cultivate the land and decide how their product is sold. For these reasons, land is a decisive factor in the crisis in Honduras. When campesinos organize, it is precisely to demand land.

FREESTON: On Saturday in the capital of Tegucigalpa, thousands marched in solidarity with the campesinos of the lower Aguán. The event was called the March of the Sombreros. The campesinos of Aguán are one of many groups that oppose the June 2009 coup. They loudly support the call for a new constitution, which is the essential demand that has unified the national resistance movement. For this reason, others around the country have been closely watching events in Aguán.

JOYCE: Watching Lobo Sosa deal with the peasants of the Bajo Aguán is our first indication of how he’s going to deal with dissidents in Honduran society. On the one hand, they negotiate with you. But there’ll be an army presence, so you’re reminded that you’re negotiating not in a free, open atmosphere but with the threat of violence.

FREESTON: After signing the deal with the campesinos, the Lobo government signed another deal with the United States government for an increase in security aid to Honduras. Soon after, the Lobo administration announced that the military, who have never left the streets completely since carrying out the coup last June, would be mobilized indefinitely to support regular police activities.

FREESTON: The government claims that the military will only be used for common and organized crime operations. But the experience of the campesinos in Aguán and the use of the military ever since the coup to repress peaceful protest has many questioning that.

JOYCE: And saying that that violence will only be unleashed against people who are arms traffickers or drug traffickers in Honduras is no particular reassurance, because the accusation of drug trafficking is regularly used as a means to discredit your opposition.

FREESTON: The minister of security, Óscar Alvarez, admitted to the newspaper El Tiempo that their operations in the Aguán region hadn’t produced any results in terms of drug or weapons interdiction. Meanwhile, the campesinos claim that six of their members were illegally detained at military checkpoints last week.

CAMPESINO LEADER: The soldiers are here, pulling people off buses to them for documents. They have a list, and if your name isn’t on the list, they don’t arrest you, but if your name’s there, they arrest you.

JOYCE: [inaudible] has repercussions for the entire set of organizations that form part of the resistance front that have been calling for public marches, for public mobilization. And these kinds of movements, especially the mobilizations that are calling for people to come from all over Honduras to central places, imagine the effect on those of the military being set loose on the streets to stop any car, any truck they want, and search anybody for arms, drugs, or other material considered to be contraband. It’s a chilling effect on free circulation. It’s a chilling effect on public protest.

FREESTON: Also last week, Honduras and its military were singled out for criticisms in the Inter-American Human Rights Commission’s annual report. President Lobo has rejected the report’s findings.

UNIDENTIFIED: They say there’s peace? There’s no peace in Honduras. As long as there is no land, there will never be peace. That’s all I want to say.