The U.S. expected China to integrate into global capitalism as a subordinate power, but recent deals with Russia show China is moving towards equality in economic and military power

The U.S. expected China to integrate into global capitalism as a subordinate power, but recent deals with Russia show China is moving towards equality in economic and military power 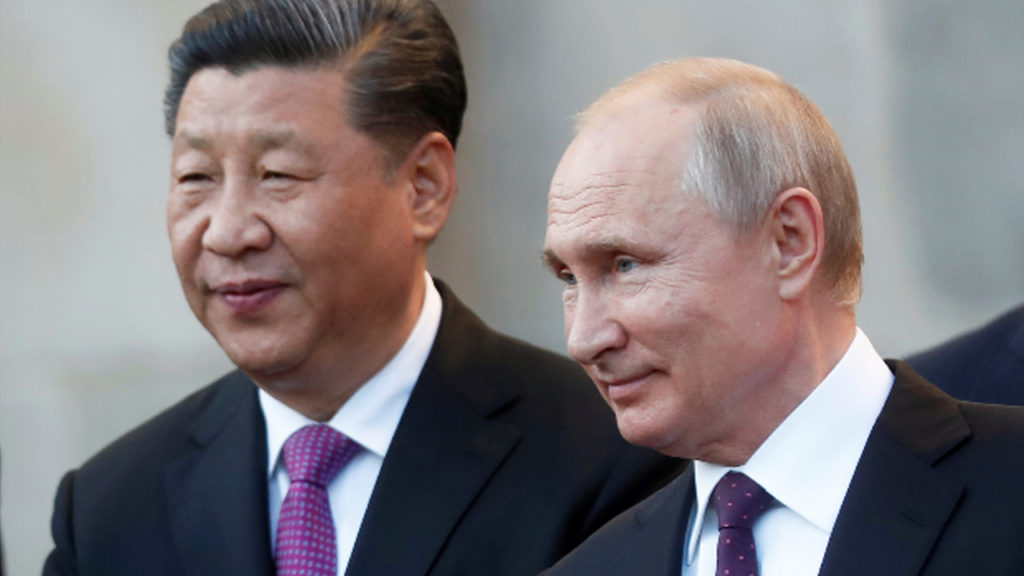 Big power rivalry is heading into very dangerous waters. The rise of China as an economic and military superpower is threatening the global hegemony of the United States. Russia has been pushed into an increasingly tighter relationship with China to balance the attempts by the West to isolate it. President Trump, representing the most aggressive sections of American capital, is responding with a trade war, and an unparalleled massive peacetime military budget that was justified by his Secretary of Defense Shanahan with three words: China, China, and China. Christine Lagarde, the IMF’s managing director, said in a briefing note that taxing all trade between the world’s two largest economies would cause some $455 billion in gross domestic product to evaporate. The report said this would be a loss larger than South Africa’s entire economy.

In a recent meeting between Russia’s President Putin and Chinese President Xi Jinping, apparently the 29th such meeting in the last few years, it was announced with the two leaders looking on that the Chinese tech company Huawei has struck a deal to build Russia’s first 5G wireless network. This is the same company that Trump has banned from developing the 5G network in the United States, and is pushing Europe to do the same.

This is clearly just the early stages of what is already the defining big power contention of the 21st century. When the two countries should be focused on the climate crisis, it’s looking more like the years before World War I. Of course, there were no nuclear weapons in 1914.

Now joining us to discuss the Chinese, Russian, and American rivalry is Rob Johnson. Rob is the president of the Institute on New Economic Thinking. He was formerly a banking associate of George Soros, and he’s now leading the Commission on Global Economic Transformation, a project of INET, co-chaired by Nobel Prize winners Joseph Stiglitz and Mike Spence. Thanks for joining us, Rob.

PAUL JAY: So just how dangerous is this trade war? When you listen to the, sort of the business media, it goes anywhere from, well, they’re all going to sort it out at a meeting in June, to this is just the beginning of something that’s going to get extremely messy.

ROB JOHNSON: I would say we can’t know whether things will be what you might call mended back together, or whether we’re opening a very, very big and contentious hole in the design of the world system.

PAUL JAY: There certainly seems to be circles within United States that do not accept the idea that this will be anything but a single-superpower world, and they’re trying to do something about it.

ROB JOHNSON: The United States officials that you referred to thought China would fall into the global trading system and evolve into a–what you might call a Western-like commercial entity. They thought that the financial systems would become integrated and open to the West. They thought they would eventually privatize and stop using state credit allocation to subsidize state-owned enterprises that compete with private enterprise. Places like the World Trade Organization, so-called WTO, would bridge the differences and bring things to a healing point. And that doesn’t appear to be where we’re going.

I also would say empires that are used to being in charge start to, what you might call, experience a great deal of dread when somebody else challenges. And the Chinese themselves were very wounded from the opium war, from the Japanese invasion. There’s a very strong sense of national identity that I think their leader Xi Jinping draws upon, but also the people yearn for. I would say the same would be the case in Putin’s Russia after the collapse of the Soviet Union. There’s some woundedness that’s in repair that gives them what I’ll call nationalistic resolve.

And so this is a hard game. And the Chinese, circa 2001, were supposed to fall into line. They were supposed to become part of our trading system. And that’s not–that’s not the case. And with the advent of digital commerce, with the announcement of China 2025, they are replacing, what I’ll call, as they move up the value chain, the more complex activities. They’re not falling into line in a U.S.-led system where they make Nike tennis shoes or assemble iPhones with low-cost labor or low environmental protections. They’re not moving into what I’ll call changing their comparative advantage, because it’s not based on what’s buried in the ground. It’s based on human capital and evolution and training and R&D.

The other final thing where I think the United States has some real concern is we have been talking about how the government doesn’t play a role. We’ve been cutting government support to things like basic science very drastically over the last 20 years as a percentage of GDP. The Chinese ultimately will have a population four to five times the size of America’s. They continue to develop their science budgets. And what you might call the locus of innovation may shift from the United States in places like Silicon Valley to a place like Shenzhen in China.

So I think the Americans are, you might call it, ostrich-like. They don’t think this challenge is going to be for real.

PAUL JAY: The global trading system, as you said, led by the United States, and also in practice, is the various countries, part of it, play to some extent a subordinate role within that system. And China is clearly positioning itself to be a direct competitor in many markets. In Latin America and other places China has actually supplanted the United States as the major trading partner. It’s a fact of life. This is–I don’t see how this is going to change. But the way Trump’s approaching this, the trade war and such, it’s all being done in the name of being good for American workers. It’s being–it’s all about American jobs. Is it?

ROB JOHNSON: Well, this is my biggest concern. You hit the nail on the head, as far as I see. The problems were originally that American-based multinational corporations, and for that matter multinational corporations in Western Europe, moved in with foreign direct investment in China, and then sold things back to the United States, whether through Toys R Us, or Wal-Mart, or other things; consumer products or telephones. And that system imposed a real adjustment on a very large portion of the American workforce. So firms didn’t go out of business, they responded by automating. But the pressure on labor intensive activity, the downward pressure on wages, is very real. But what a Chinese leader would tell you, and I go over there two, three times a year to meet with them, yes, those adjustments took place. But the responsibility to alleviate that suffering belongs with the American government. The transfers that–what I’ll say, leaving orthodox economists probably said free trade is great, because you can compensate people and nobody’s worse off and some people are better off. The problem is we don’t have a political economy in America that’s set up to make those transfers. So the losers lose bad and the winners lobby to get their own taxes cut and keep their money offshore.

And so the, you might call it divisiveness, or the unsustainability of the narrowing of prosperity is a problem in the United States which Donald Trump, what you might call his genius, was to call that out when both Democrats and Republicans were hiding from it. And people felt like they’d heard the truth for the first time in a long time. But Trump’s diagnosis is now being used, what you might call, as a prescription to beat on the Chinese or the Mexicans or whatever, is a rallying cry for the people who support him to get re-elected. And I think we’re entering into very destructive and treacherous waters if we stick to this path. And he’s not redressing the problems of those people who were in such pain that voted for him. The people who suffer from what are so-called the diseases of despair.

PAUL JAY: And one of the sort of not real secrets, but sort of a dirty secret, because people don’t talk about it very much, is one of the things that in fact has been subsidizing American workers as their jobs flee, both through going to China and such, and also through automation, has been such incredibly cheap products coming from China. I mean, you go to Wal-Mart and you can buy, you know, a dozen socks for, like, $3. That’s a kind of subsidy from cheap Asian labor for American workers which, one, the tariffs are going to eliminate, and two, in the long term, American workers are going to be replaced by automation and they’re going to lose the cheap products from China.

ROB JOHNSON: Yes. Well, what I would say is cheap products from China are fine as long as you have a trust fund. If you don’t have a trust fund they can be as cheap as whatever; making zero income you still can’t buy them. And I think in the United States what I’ve talked about transfers was income support and retraining support for people to evolve as, you might all it, the shock of the development of China reoriented the pattern of trade.

This is also true–this isn’t an American problem only. There’s a wonderful book called Everything Is Broken Up and Dances by Edoardo Nesi in Italy about how the textile industry, of which his family was an owner, got devastated by the entrance of Chinese textiles. And in Germany and the Eurozone, problems have been Germany makes capital goods and high what you might call inputs to production. They sell a lot of new exports to China, helping them develop, while Southern Europe is largely labor intensive. And after the Lehman crisis everybody wants austerity, so you can’t use the fiscal button to transform, so you just sit in stagnation for the better part of a decade. Very many parts of Europe, particularly southern Europe are doing worse now since 2008 than they did in the 1930s, the depression. And so these are very substantial, powerful forces. America is not handling them well, the eurozone is not handling them well. And the stagnation–this is kind of the irony–the stagnation of demand in places like Europe and to some degree America has been a source of why the Chinese have changed to go inward and move to higher value-added products.

PAUL JAY: All right. Thanks for joining us, Rob. Let’s pick this up again. I know you’re about to leave on a trip, but when you come back let’s talk about what alternatives look like.