Yesterday's earthquake made my whole apartment move from side to side, like a tiny old ship caught on reckless waves. I live in the old part of central Puebla, just 51 km from the epicenter. After the quake, I ran downstairs to see if my neighbors were okay, and watched as crowds gathered in the middle of the street – normally a busy fish and vegetable market. Children were crying, people were a bit shaken, but they seemed okay. 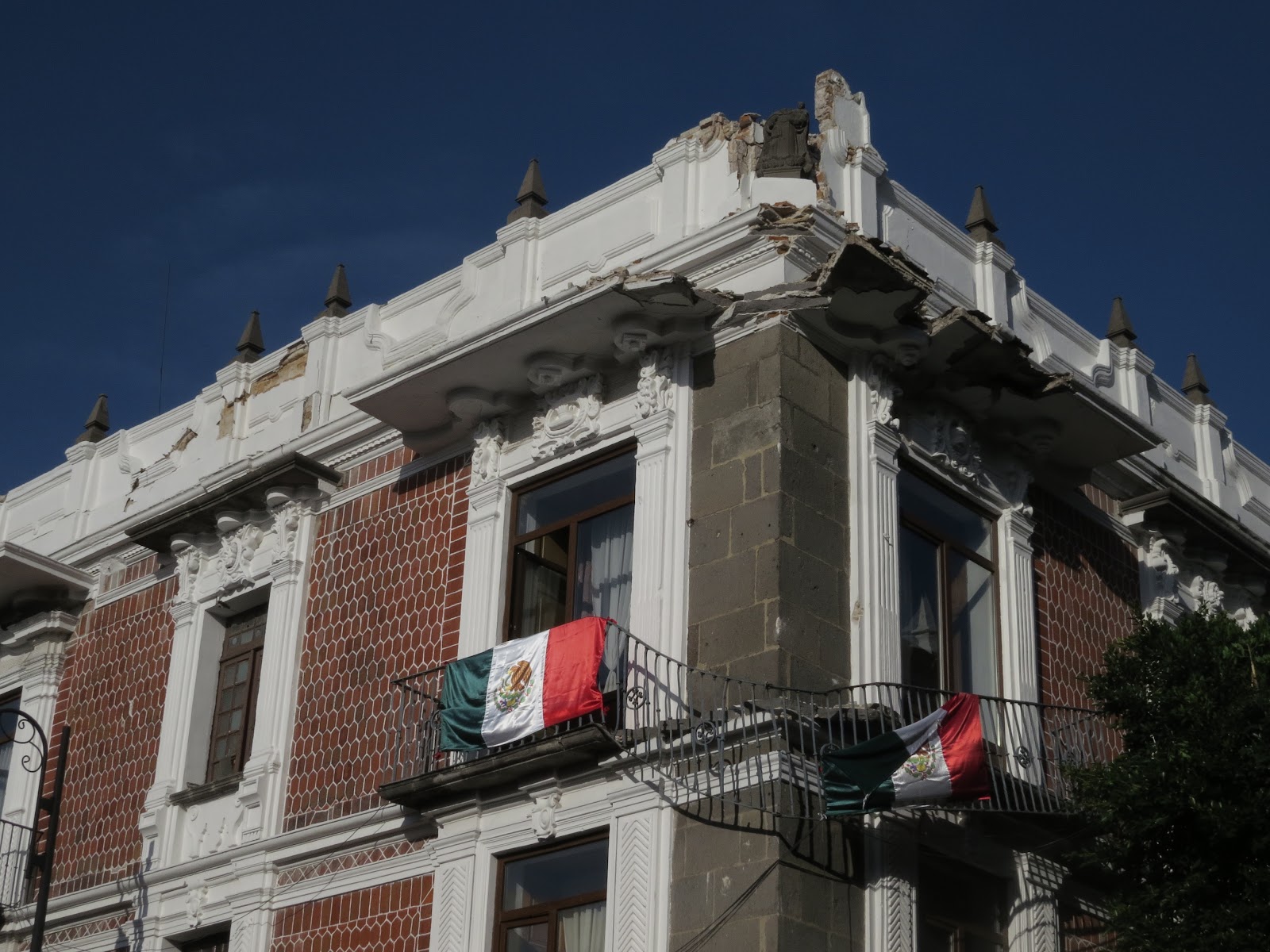 This morning I walked around the city, observing the large cracks and broken corners on some of the most historic and beautiful buildings. Meanwhile, news is coming in from Mexico City, from Morelos state, and from the smaller and the poorest towns, of churches that have caved in and crushed those who were inside, of collapsed schools which have so far left 37 kids and teachers killed, and of other buildings that have toppled near friends' homes.

In Mexico City a number of multi-storey buildings collapsed in on themselves, some bridges are unusable, and officials have counted over 200 deaths so far, 800 injured, and 5 million temporarily left without electricity. Classes have been suspended in the central states of the country, and parts of the cities are closed to cars, or have been evacuated.

Friends overseas have expressed concern, and most people here in Puebla are taking the day off work or school to help distribute goods, clear rubble, or just do whatever they can for those who need. The extent to which people care is really inspiring, and some of the building collapses have been tragic. But Mexico is dealing with bigger tragedies than this, though they are less social-media shareable than the footage of collapsing buildings.

When you walk around Puebla, particularly where I live and to the north – away from the touristic historic center and into the poorer suburbs – you can see a lot of abandoned buildings, turned rubble, crater-like holes dot the roads, shops are falling apart, and the school where I teach is half dirt-floor, with an impossible, rocky dirt road leading to it. Street drainage doesn't work, leading to landslides in the rainy season, and most of us just get water for 30 minutes a week. The poor parts of Puebla city and state, like much of Mexico, are abandoned by the government, and in many ways look like an earthquake already hit, and keeps on hitting.

Beyond this of course, there have been 83 femicides in Puebla so far this year, and almost 30,000 forced disappearances in the country over the last decade (and that's the official figure, the reality is likely to be around five times that), 22 million Mexicans don't have tap water in their homes, and the majority of Mexicans earn less than US$380 per month.

But there's no “mark yourself safe” for domestic violence, or the ongoing trauma of poverty. International concern about systemic inequality is more subdued. Maybe, it's just easier to help out in short bursts for natural disasters, than for ongoing disasters like the one here, where working 13 hour days, six to seven days a week is normalized, and the government spends its time filling its own pockets.

Indeed, yesterday's earthquake followed two weeks behind an 8.2 earthquake that hit more to the south of the country. Towns like Jucitan were practically leveled, with 7,000 damaged buildings for a population of 74,000 people.

While people in Mexico City and other cities flooded to supply tents to donate goods, in affected towns five days after the earthquake, residents complained they didn't have anything to eat and had only been given water and blankets by the army. Most people left homeless were still sleeping in the street, and residents said the government was slow to even help clean up the rubble. 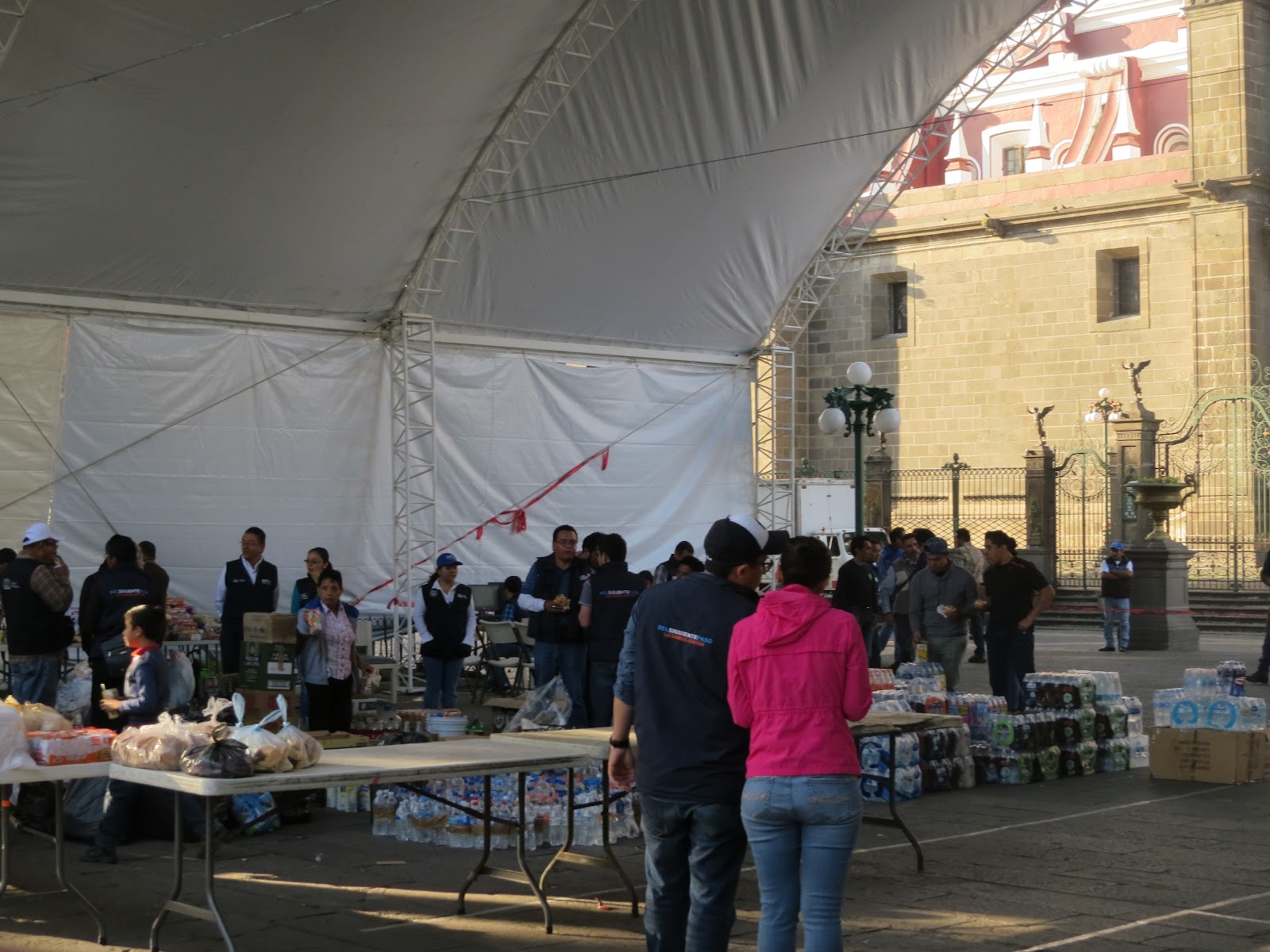 “The army doesn't help us, they just march through (here), like a parade,” one resident who lost his home in Ixtaltepec, told La Vanguardia. In many cases, local and city mayors didn't even visit their destroyed towns, with locals forced to reach out through social media, pleading for help and for food. Days after the earthquake, some 50 families sleeping in a sports court complained that they had only received one bottle of water from the local government, and said they needed food, water, mattresses, and nappies, and that anything the government had said about helping out was “just words.”

Since then, people have accused the various levels of government of distributing supplies as a political campaigning tool, in light of next year's presidential elections. Non governmental organizations that have been helping out in the area said that they observed how in the town of Ixhuatan, refuges set up all belonged to different political parties: to the PRI, PRD, and PAN. In Juchitan and Union Hidalgo local police were reported to have stopped people distributing goods to individual houses, only to then distribute those goods in the political parties' refuges.

Despite almost all of these goods coming directly from Mexicans, “In San Francisco del Mar, as they handed out the provisions, they said it was help directly from Governor Alejandro Murat and his wife,” Juan Lopez, coordinator of one of the charities, told Reforma. Juchitan mayor, Gloria Sanchez has even been accused of keeping the provisions donated for herself and distributing them among friends and family and party supporters.

They say you can judge a society by its prisons, but you can also judge a government by its response to tragedy.

Tamara Pearson is a long time journalist based in Latin America, alternative pedagogy teacher, and author of The Butterfly Prison. She blogs at Resistance Words.