Are the trade negotiations with china and the rewriting of NAFTA aimed at raising wages or profits? Gerald Epstein joins Paul Jay

Are the trade negotiations with china and the rewriting of NAFTA aimed at raising wages or profits? Gerald Epstein joins Paul Jay

Why Aren't Wages Up? 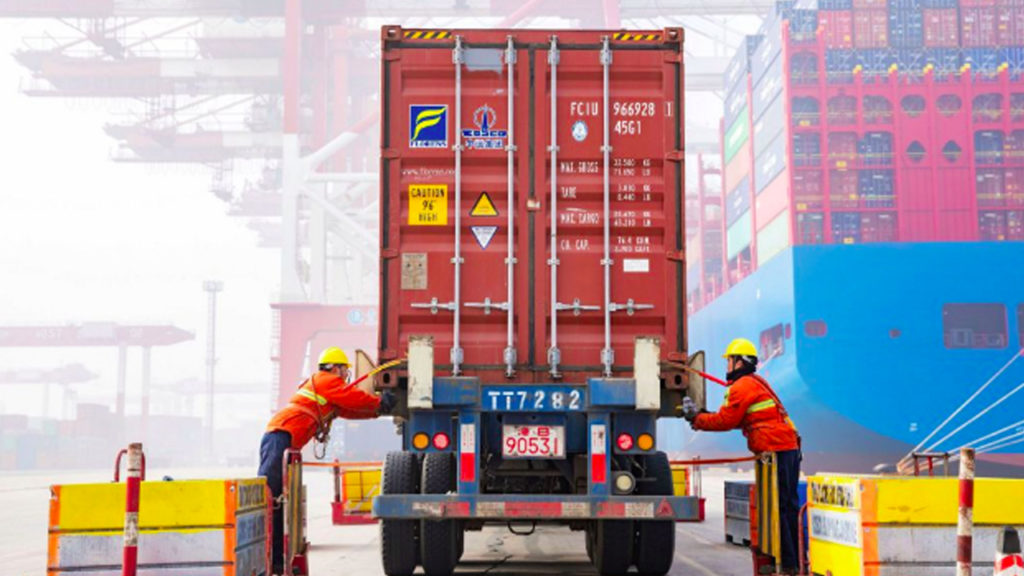 PAUL JAY: Trump is starting trade wars all over the world, particularly with China. Is any of this going to help raise American workers’ wages? That’s next on The Real News Network.

We’re continuing our discussion with Jerry Epstein about the fact that unemployment is relatively low, there’s more jobs. In fact, in the most recent jobs report in March, jobs was at a 18 month high, adding thousands of new jobs, but growth in wages only went up about 4 cents, where the month before, in February, it went up 10 cents. And anyway, we’re going to have to discuss now a bigger picture question, which is Trump’s solution to this was supposed to be ending free trade agreements; he was against NAFTA, he renegotiated it, he ended TPP, he’s arguing with China about rejigging, restructuring trade with China. Will what Trump is doing actually help raise American workers’ wages?

Now joining us again to discuss this is Jerry Epstein. Jerry joins us from Amherst, Massachusetts. He’s co-director of the Political Economy Research Institute and professor of Economics at UMass Amherst. Thanks for joining us again, Jerry.

GERALD EPSTEIN: Thanks for having me, Paul.

PAUL JAY: So first of all, the underlying concept that there is cheap labor, especially in China, but certainly in many other countries in Asia and Mexico–don’t American workers have a right to say,”Put some tariffs on these goods because there’s no way American workers can compete with this kind of cheap labor, and put some pressure on these other countries to raise their wages and create a bigger market in their domestic market, especially China, and American workers shouldn’t have to compete with this.” Now, that underlying idea is one idea. Then the second is, that’s what Trump suggested he would do, and is he? So take on both of those things.

GERALD EPSTEIN: Well, certainly, American workers have a right to demand higher wages and good working conditions, the right to unionize and to organize. And it is true that American workers need to have protection from imports from abroad that are facilitated by artificial subsidies from, say, the U.S. tax system, that subsidizes U.S. multinational corporations to go to China and elsewhere to produce using cheaper foreign labor to undercut American workers. We need to get rid of those kinds of tax breaks and tax subsidies. And if these other countries are using strong arm tactics against their workers, against unionization and so forth, yes, American workers do have the right to demand a more even playing field. There’s debate about what the exact proper mechanism for doing that is, whether it’s tariffs or some other kinds of Buy America First programs or subsidies for jobs in America. There can be a lot of debate about what the proper policy is, but yeah, Americans have every right to demand a fair shake in the global economy.

PAUL JAY: So is what Trump is pursuing, take the trade negotiations with China, will that lead to raising American workers’ wages? Because when I look at those negotiations, Trump seems far more focused on the trade deficit, that China should buy more products. But if China is buying more high end products, high technology already in the sectors of the economy with relatively high wages, and still, so much of the textiles and other kinds of manufacturing, small goods–relatively in the American market, cheap goods–is flowing in, does that really raise the wages of American workers, or does it just actually make more money for, I don’t know, Boeing and some of the companies that are operating this higher tier?

GERALD EPSTEIN: Well, first of all, let’s look at what Trump has actually–his negotiators are actually demanding from China. He talks a lot about the trade deficit, but the fact of the matter is, the negotiators are looking for other kinds of concessions. They’re looking for concessions to force China to open up its financial markets to big U.S. Wall Street banks, Goldman Sachs, JP Morgan, you name it. So that’s number one. Number two, they’re looking for assurances from China that they’re going to enforce intellectual property rights, that is, patents for pharmaceuticals and high tech companies. That’s going to increase the profits of these companies, but it’s not going to help American workers. Most of the things that the negotiators are demanding from China have very little to do with raising the wages of American workers, or even reducing the trade deficit. They’re all about enhancing the profits of the largest multinational corporations.

And NAFTA, the so-called “new NAFTA,” is pretty much the same thing. There might be a few small things in there about more domestic content produced in the U.S., but for the most part, it’s about protecting pharmaceutical prices, it’s about protecting intellectual property, et cetera. So this is very typical Trump. He talks a good game about the American workers and farmers and deficits, but the real negotiations are almost all about protecting the profits of American business. The short answer is no, what Trump is doing is not going to help American workers.

GERALD EPSTEIN: Well, here’s the thing. We can’t think of–in my view, we can’t think of trade policy independently of other kinds of policy, in particular, industrial policy, making the transition to a fossil free energy system. What we need is a system of American government investments, perhaps public-private partnerships, that help us make this transition to a green economy, like my colleague Bob Pollin has been talking about, invest in high tech jobs for American workers, retrain American workers for other jobs that actually exist through these industrial policy activities; public transportation, high speed trains, electric cars, solar, et cetera. And as part of that policy, there can be Buy America First sorts of programs put in place so that American companies get the first shot at these productions and American workers get the first shot at getting these jobs, and so it’s not all taken over by imports from China and elsewhere.

PAUL JAY: And if you had a progressive American government, you could have a situation which is tariffs on non-union made products to kind of encourage unionization outside the United States, which would also tend to equalize the wages.

GERALD EPSTEIN: That’s right. There’s something called a social tariff, which progressives have talked about for a while and the labor movements talked about these for decades, which do exactly what you said. They penalize countries that have oppressive labor relations, et cetera. And so, that’s something else that could be on the table and should be considered. So if we think about what the Democrats should be proposing, and the Democratic candidate should be proposing, it should be an integrated set of programs connected to a Green New, Deal industrial policy, et cetera, with a progressive trade policy that doesn’t penalize other countries that have genuine pro-labor kinds of policies, that are trying to help them their people develop, and does penalize other countries that are just oppressing their workers as a way–often in the interest of American multinational corporations–as a way of undermining U.S. workers.

PAUL JAY: All right. Thanks for joining us, Jerry.