Will Israel Respect the Gaza Ceasefire it Broke?

There are reports of a new ceasefire in the Gaza Strip after a botched Israeli raid led to its worst bombings of the territory since 2014. We discuss Israel’s latest attacks on civilian infrastructure with Dr. Basem Naim, former Minister of Health in Gaza

There are reports of a new ceasefire in the Gaza Strip after a botched Israeli raid led to its worst bombings of the territory since 2014. We discuss Israel’s latest attacks on civilian infrastructure with Dr. Basem Naim, former Minister of Health in Gaza 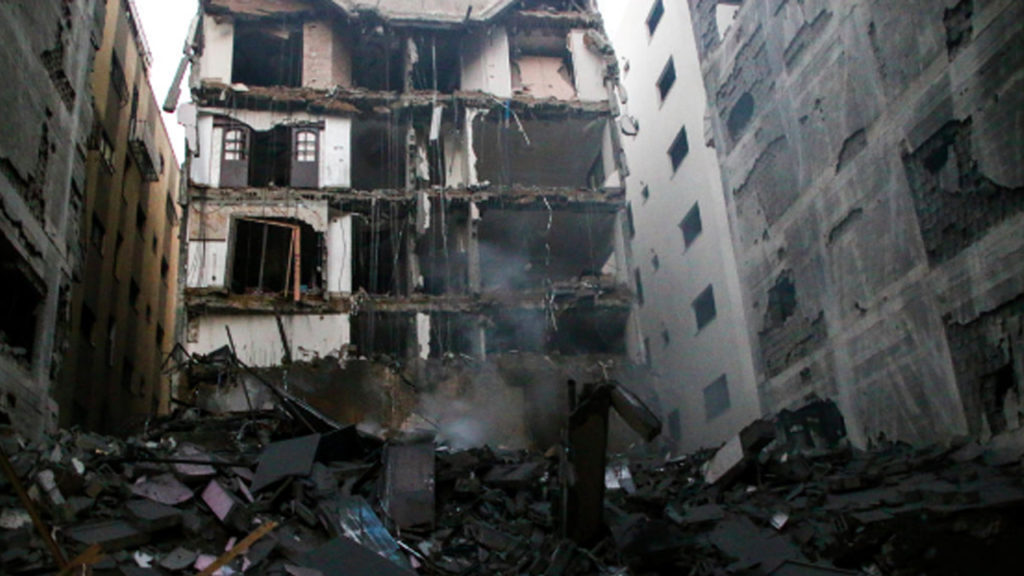 There are reports of a ceasefire in Gaza after the worst Israeli bombings there in four years. The latest violence began after a botched Israeli raid turned deadly. Palestinians discovered a car of undercover Israeli operatives, leading to a firefight. The Israeli forces called in airstrikes that killed seven Palestinians. Palestinian militants then fired rockets into southern Israel, and Israel launched massive airstrikes that destroyed homes, the AlAqsa TV station, and other civilian infrastructure.

Now a ceasefire has reportedly been reached, in a move brokered by Egypt. But it’s worth remembering that any ceasefire would only return Gaza to the state of affairs of just a few days ago, when Israel’s raid was the latest in a long pattern of its breaking of ceasefires. And throughout this period, Israeli violence has continued. Since March, for example, Israel has been killing civilian protesters in Gaza every single week. Since the Great March of Return protests began on March 30, Israeli forces have killed at least 214 Palestinians and wounded more than 18,000.

Joining me is Dr. Basem Naim. He is the former health minister in the Gaza Strip, joining us now from Gaza. Welcome, Dr. Naim. The way the media has been reporting the story over the last few days or so is that this is another round in a cycle of violence; clashes between two equal sides. How do you see it?

DR. BASEM NAIM: Well, it’s unfortunately the truth, what you have said. But the truth about the mainstream media, but it is not the truth about what is appening on the ground. The reality is we are talking about occupied people. Especially if we talk about Gaza, we are talking about two million Palestinians in the biggest open-air prison on earth; 365 kilometres, for more than 20 years, like an animal farm.

When we talk, when we take the last round of so-called violence, two days ago, on Friday we were really relaxed, and thinking [inaudible]. Tomorrow we are thinking a future after reaching a ceasefire understanding through the Egyptian and UN efforts with [inaudible] to ease the siege on Gaza by allowing money for salaries to come in, improving the problem of electricity, easing the passage through Rafah, and so on and so on. Really we were relaxed and the [inaudible] were relatively calm, despite they had killed someone. He was more than 300 meters away from the fence, but they had killed him while he was dancing [inaudible].

But despite this Palestinians said, OK, we want to go forward for the ceasefire. Suddenly we were surprised- we cannot really say really surprised, because this is the usual behaviour of the Israeli tradition. They didn’t respect their words, their signatures. On Saturday, one day after the Friday, Palestinian fighters on the border discovered an Israeli bus; armed soldiers coming into Gaza. And when they faced these Palestinian guards they have started to shoot them, and they have killed seven. But later on, the Israelis called the forces to cover the withdrawal of the [inaudible] soldier.

All of these [inaudible], the Palestinians in general and the military groups especially, were obliged to respond to defend themselves, because the Israelis started to attack the Palestinians. And this is the reality. But what we usually hear in the mainstream media, that Gazans are launching rockets against the Israelis.

AARON MATE: Right. So, Dr. Naim, so let me ask you, I can’t help but note the timing of this, because it falls on a pretty important anniversary. About 10 years ago- November 4, 2008- Israel launched a similar kind of raid into the Gaza Strip that provoked a Palestinian response. And then we had this massive Israeli assault on Gaza starting in December 2008 that killed so many Palestinians, and ended right before the inauguration of Barack Obama. And it’s important to note the date when all this began, November 4 2008. That was the same day that the world attention was fixated on the U.S., because that’s when Barack Obama was elected. And that’s when Israel chose to break the ceasefire that was in place, and launch that raid that then set off the hostilities.

So I’m wondering, you’re talking now about there was a period of calm and even optimism right before this latest Israeli raid. And so I have to ask you, do you think this was a deliberate effort by Israel to once again provoke a Palestinian response and break the ceasefire?

DR. BASEM NAIM: We have to talk about two important points here. The reality on the ground, the Israeli aggression- not only the siege, but the Israeli invasion and incursions, its [inaudible] of Palestinians, killing of Palestinians, didn’t end. Around the clock, seven days a week, every day we have- and as you have said at the beginning, since March 30 they have killed more than 220, and wounded more than 20,000 innocent peaceful protesters simply because we are calling for lifting the siege. I think the aggression of Israeli occupation did take a toll. But sometimes we don’t reply, or we don’t- or the international community is not interested to hear our voice. So sometimes the Israelis, for example, if we compare this with the, even to 2008, I think one of the crucial factors for the development of these escalations was the internal Israeli conflicts between the different parties and ministers.

We know that the Israelis are heading to a new election soon. And therefore each one of them is going to show that he is hard enough against the Palestinians. Therefore when we now decided to accept the ceasefire three days ago, [inaudible] the first chance to break this ceasefire agreement and to launch this aggression against Gaza. I mean, this internal conflict is usually reflected on us. In 2008 I think the three parties at that time, it was Tzipi Livni, Ehud Barak, and [inaudible] they were united that their interest is to attack the Palestinians, to attack Gaza Strip again for, more or less, for their own personal interests as potential candidates as leaders in the Israeli cabinet.

Again, we were always the victims. The Israelis attack us directly by airstrikes, or besiege us, or continue depriving us of the basic rights; we were always along the last 20 years the victims of this aggression, and the victim of the International negligence. Because Israel is an occupying power, is expected to be obliged by the international community to respect its mandate as an occupying power. At least if we don’t talk about more political aspects and [inaudible] totally from our territories, and to give the Palestinians the right of individual freedom and dignity.

AARON MATE: Right. But instead of that possibility, you have Israel now threatening the entire Gaza Strip, all of its people. I want to read to you from a tweet that was deleted from an Israeli government account for the department that is responsible for the situation in the occupied territories. And it said, “Israel will continue to respond with an iron fist against all terrorist activity or rocket fire. Residents of Gaza, look carefully at the pictures from Operation Protective Edge in 2014. A picture is worth a thousand words.” And it shows a split screen of Israel bombing Gaza in both 2014 and 2018.

Dr. Basem Naim, as we wrap, your final words for the people of the world looking on right now at the situation in Gaza?

DR. BASEM NAIM: Again, we hope that the international community look after our catastrophic situation here in Gaza as victim of this continuous Israeli aggression. We are occupied people. We are looking only for our freedom, dignity, and a better future for our children and generations. We are looking for how can we participate in the welfare of humanity. We didn’t at any moment think of the escalation of aggression against anyone unless defending ourself. Therefore we hope that the international community do its role to help Palestinians to achieve their national goals.

AARON MATE: Dr. Basem Naim, former health minister in Gaza, speaking to us from Gaza. Thanks very much.

And thank you for joining us on The Real News.