Cheney's support for pro-industry "regulators" created massive damage to America - says Larry Wilkerson, depicted in the film VICE and former Chief of Staff to Sec. State Colin Powell - a REPLAY from a 2010 interview by Paul Jay

Cheney's support for pro-industry "regulators" created massive damage to America - says Larry Wilkerson, depicted in the film VICE and former Chief of Staff to Sec. State Colin Powell - a REPLAY from a 2010 interview by Paul Jay

Wilkerson on the Real “Vice” - Cheney 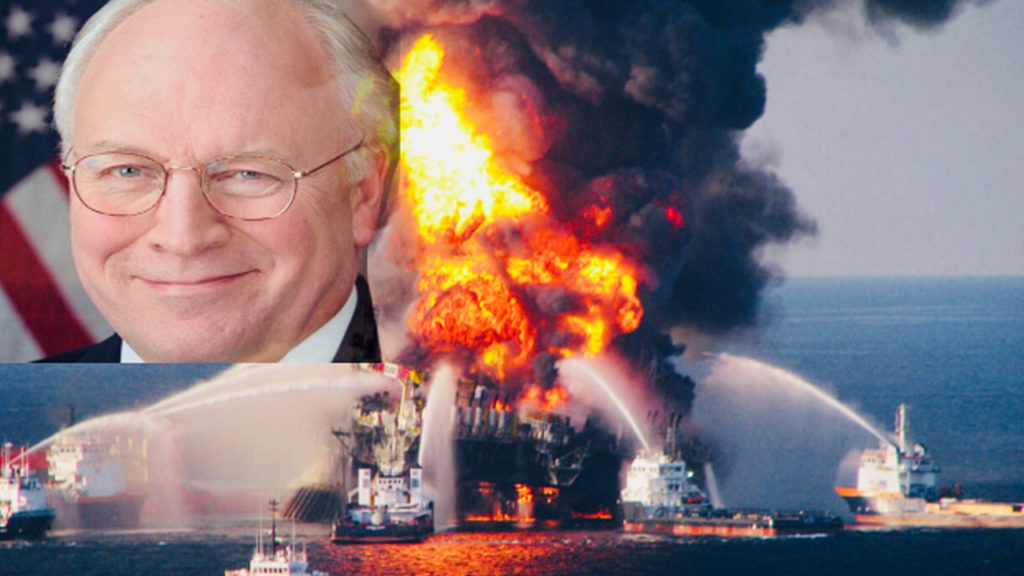 PAUL JAY, SENIOR EDITOR, TRNN: Welcome back to The Real News Network. I’m Paul Jay in Washington. And we’re talking about Vice President Dick Cheney, 46th vice president of the United States, also known as a friend of big oil. Now joining us to talk about Dick Cheney is Larry Wilkerson. He was Colin Powell’s chief of staff, and he teaches national security policy in Washington. Thanks for joining us again.

LAWRENCE WILKERSON, FMR. CHIEF OF STAFF TO COLIN POWELL: Good to be here.

JAY: So talk about the dynamic of Cheney’s economic alliances. He was CEO of Halliburton. He’s known as a friend of oil. What are the actual mechanics of that? Like, does he actually sit—like, we’ve seen it in the movies; we’ve seen politicians sitting in rooms, you know, private clubs, with expensive cigars and nice cognac, and they talk to their political minions. What’s the dynamic?

WILKERSON: It’s an extraordinary dynamic, actually, and I think ultimately it’s going to be more damaging to the American republic, to our country, than perhaps the Iraq War or the interrogation policies and so forth that Dick Cheney’s more famous for. A book by a political scientist at Gettysburg College, Shirley Anne Warshaw, called The Co-Presidency of Bush and Cheney, documents a lot of what Cheney did to destroy about a half-century or more’s regulatory work with regard to oversight of fisheries, forestry, oil, gas, minerals in general. You name it. If it was supervised, if it was overseen, if it was regulated by the federal government, Cheney with his marvellous bureaucratic talent moved in and essentially replaced the people who were in the positions that were central to this regulation, this oversight, with people who were either lobbyists for the industry being regulated or executives from that industry.

JAY: SEC [Securities and Exchange Commission] is one of the examples of it.

WILKERSON: He destroyed the regulatory mechanisms in America.

JAY: Give us some examples.

WILKERSON: Well, he put—as I recall, he put a 20-year veteran of lobbying for the oil industry into the position overseeing, essentially, the regulation of offshore drilling and that sort of thing, the MMS [Minerals Management Service]. You name it, there’s a Cheneyite there. And here’s the further genius of the man. Every president since World War II, and before that, too, in different ways, has left his mark on the administration that a incoming president really can’t erase very easily. Cheney did this par excellence. I mean, Cheney left, I’m told, somewhere around 1,600-plus people in the administration whom he had converted from being political or he had recruited as civil service. He converted them to civil service if they were political and left them in these positions that are very key to regulation and oversight. And those people will take a year or a year and a half, maybe even two years, for the Obama administration to root out and get rid of. First they’ve got to identify them, and second they’ve got to go through the civil service procedures to fire them, which are onerous, arduous, and difficult. So eighteen months to two years to get rid of some of them.

JAY: So you can draw a line between Cheney and what’s happening with BP in the Gulf.

WILKERSON: Absolutely. Absolutely. Cheney is responsible for what’s happening in the Gulf, in my view, for two very distinct reasons. One, he was CEO of Halliburton, and Halliburton was the company, I think, that was on Deep Horizon doing the cement cap which has caused so much problems because it wasn’t done properly, apparently, and it exploded and allowed the oil to begin leaking. So, I mean, this is the company that he guided and ran (and he’s very proud of that, as he’s said many times) for several years. And he also—and I think this is a more direct responsibility—.

JAY: Well, just to be fair, we don’t know that he was running the company at a time that had a direct connection with BP’s pipe in the Gulf.

WILKERSON: No, we don’t. But I would suspect that his lack of oversight and lack of expertise in the things that they do was very appreciated by the people who did them at Halliburton. I mean, you bring in a Rolodex guy and not a guy who really knows about the nitty-gritty of what you’re doing, and the nitty-gritty gets done however you want to do it because the guy’s bringing you the cash. So I don’t have a problem ascribing responsibility to Cheney’s leadership of Haliburton leading into Halliburton’s [inaudible]

JAY: ‘Cause you’re saying it helps create a culture that allows something like this.

WILKERSON: Absolutely. Absolutely. And we saw that in Iraq, too. We saw Halliburton charging prices that were out of this world.

JAY: And even convicted of [inaudible]

WILKERSON: Yeah, [inaudible] convicted of this sort of thing, and actually having to break off Kellogg Brown & Root, its subsidiary, because Kellogg Brown & Root was getting so nefarious in what it was doing that Halliburton didn’t want to be associated with it anymore—and, of course, all this was cast as financial decisions and so forth. But in the second way, and I think the more profound way, Cheney’s responsible for the deregulation that leads to, I think, lots more problems down the pipe. In fact, I’m told there are—in this same category, I’m told there are platforms out there that are drilling at 7,000 feet. This one, Deep Horizon, was about 5,000 feet. I’m told that the same kind of procedures are being used on all of them. Just this morning I heard about the MMS again being embroiled in these kickbacks from the industry and so forth, people at the MMS, on NPR. This is all a part of the culture that Cheney created in the eight years that he was vice president. And I don’t want to blame it all on Cheney, because this has been a Republican mantra for a long time. And whether it’s Mitch McConnell in the Senate or whether it’s someone else in the Republican guard, we—I’m a Republican—we have been spouting this deregulation, spouting this “the market is the best guide”, spouting this business about let private industry do everything and all things will be wonderful, and don’t have any government interference at all. And what we’ve done is stripped government regulation and oversight from so many things across this country, we’re going to be paying for it for years to come. We’re going to be paying dearly for it. There are going to be more oil spills, there are going to be more bridges collapsing, there are going to be more hurricanes that surprise us in their devastation and so forth, because we Republicans have stripped government of its ability, of its capacity to do the kinds of things that it should do that no one else can do, certainly not someone with a profit motive can do.

JAY: What, did you used to believe in this?

WILKERSON: I’m a more balanced Republican, I think. I recognize the need for government in some places. I recognize the power of the market. I recognize the power of entrepreneurship. I recognize the power of the American economy, the way it runs. But I am not for divorcing government entirely from that economy, because when you do so you get what we just went through. You get financial banks, for example, breaking all kinds of previous rules until they were stripped away, Glass-Steagall on, and you get messes and you get incredible maldistribution of wealth. You get—what are we now? We’re at something like 13 percent of households in America own 40 percent of the wealth, I think. I can’t remember the figures exactly, but the distribution of wealth in this country right now is horrible. It’s worse than the UK.

JAY: So a lot of these things get dressed up as ideological positions like “we believe in the power of the free market”. The war in Iraq is “we believe in democracy”. But a lot of this is just about money-making.

WILKERSON: It is about money-making. It’s about commercialism. I had a student at George Washington University who wrote a great paper about Colombia. Why have we been putting $750 million, roughly, a year, about $1 billion a year, some $6.8 billion overall, I think, into the Andean region, into Plan Colombia? Why have we been doing it? Has it really been to fight drugs? Has it really been to fight drugs? Is that what we’re really interested in? Well, if you look at where we’re talking about building our military bases, they’re not near the FARC, the group that is involved in narcotrafficking. They’re not near the coca fields. The bases are near the pipelines, the pipelines in Colombia, the oil pipelines. Where are we laying down our troops in Afghanistan? Near the Turkmenistan-Afghanistan-Pakistan-India proposed pipeline. It’s all about commercial interest in the long run. And I don’t fault the country for that; I don’t fault our leadership for that. We do have to have a sound economy, and we do have to be competitive in the world. But I do fault them for making this less than transparent to the American people, and even to lying about it at times.

JAY: Well, it’s also a little difficult to get young Americans to go give up their lives to defend somebody’s oil pipeline.

Sex Workers Are Organizing, and Voters Are With Them