CEPR co-director Mark Weisbrot lays out the roots of Argentina's latest economic crisis, which have to do with the government's massive foreign borrowing spree, deepening austerity measures, and rising Federal Reserve interest rates

CEPR co-director Mark Weisbrot lays out the roots of Argentina's latest economic crisis, which have to do with the government's massive foreign borrowing spree, deepening austerity measures, and rising Federal Reserve interest rates 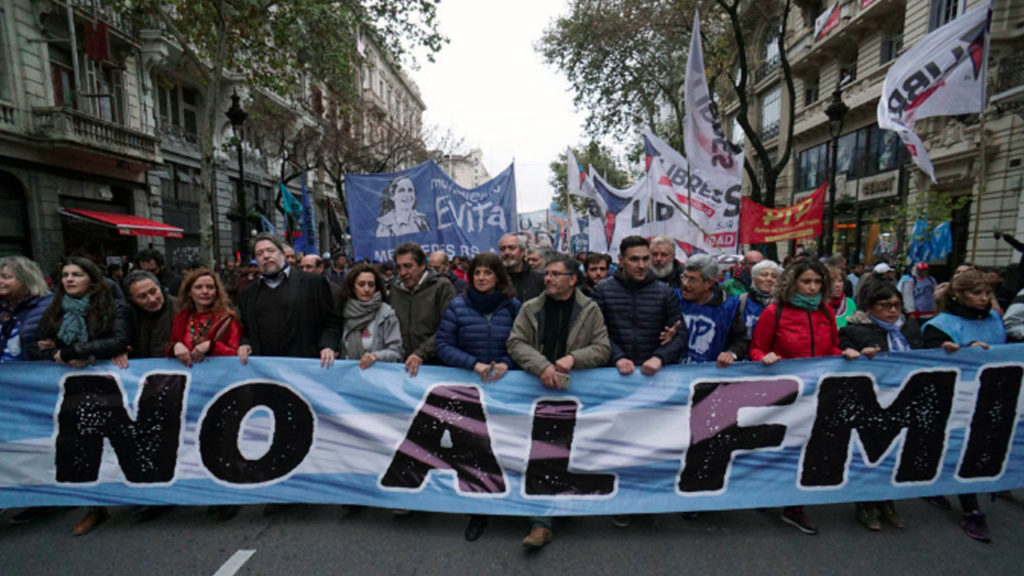 GREG WILPERT: Welcome to The Real News Network. I’m Greg Wilpert, coming to you from Baltimore.

Over the past few days, the economic crisis in Argentina has been getting increasingly more serious. Last week, Argentine President Mauricio Macri announced a new increase in the country’s interest rates, raising them to 60 percent, now the highest in the world. The measure is meant to halt capital flight and a decline in the Argentine currency, the peso, which has already declined by more than 50 percent since the beginning of the year, and took another nosedive earlier this week. Also, Macri plans to raise taxes on exports and to introduce even sharper austerity measures than had already introduced earlier this year. Argentine finance minister Nicolas Dujovne described the plan as follows.

NICOLAS DUJOVNE: We are going to save $6 billion more that we won’t have to finance in the markets, and in 2020 we’re going to have a primary surplus of 1 percent of GDP, which will save us another $5.2 billion dollars.

GREG WILPERT: In another development, Argentina announced that it will also be asking the IMF to immediately disburse a $50 billion credit line that had been approved last May, one of the largest such loans in IMF history. Meanwhile, ordinary Argentinians are taking to the streets over the past few months to protest the increasingly harsh austerity and inflation in the country. For example, last week protesters clashed with the police in a protest against state sector layoffs.

Joining me now to discuss the economic situation in Argentina is Mark Weisbrot. Mark is the codirector of the Center for Economic and Policy Research, and he’s the author of the book Failed: What the Experts Got Wrong Agout the Global Economy. Thanks for joining us again, Mark.

GREG WILPERT: So let’s start with Macri’s most recent economic policy announcements: The increasing of the interest rate, the raising of taxes from exports, and introducing even more austerity measures. What is the justification for these policies for the government?

MARK WEISBROT: Well, the justification is to restore confidence in the markets. And that’s spelled out in the IMF agreement that they have signed in June. And the idea is that by taking these measures, this will reassure the markets that the government is not going to continue to do anything that would undermine the confidence, particularly, of foreign investors, given that they’ve run up a huge foreign debt since Macri took office.

GREG WILPERT: So what would you say are the most likely short-term and long-term effects of these policies, leaving aside whether they will actually increase confidence in the economy?

GREG WILPERT: Well, actually, just also, aside from trying to reduce imports, it seems like they might be reducing exports as well with this export tax. Wouldn’t you say so?

MARK WEISBROT: No, I think the export taxes are OK. That’s a good source of revenue for the government, and I think Macri shouldn’t have cut those in the first place when he came into office. But the real problem is that the government has borrowed so much. They are borrowing, central government borrowing has gone from $63 [billion] to over $140 billion. And they really didn’t have to do it. And they’ve burned through their central bank reserves, as well, at a high rate.

And this is part of what’s contributing to the crisis. And they didn’t- it was unnecessary because they could have borrowed domestically instead. It’s the foreign borrowing. And another thing is they were left by the Kirchners, by Cristina Kirchner, with very, very little foreign debt relative to their economy. And this is something that is important because this government, and some of the media and the people who support them, are trying to blame the previous government for the crisis that he’s facing. But in fact, they did leave some imbalances. He had to settle the debt with the vulture funds, of course, and he removed some of the capital controls and allowed the exchange rate to float. And those were actually positive measures. But it was the foreign borrowing and wasting billions of dollars trying to defend the currency while it was falling. And you could see its fall. And it’s lost half of its value against the dollar. All of that money was wasted and added to their foreign debt.

GREG WILPERT: Well, that’s actually one of the things I want to get to, dig a little bit deeper into. I mean, how is it that our currency lost so much value and how did- you mentioned, of course, the borrowing. But how come did Macri all of a sudden end up in this financial crisis that he didn’t really face when he came into office?

MARK WEISBROT: Yes. Well, he made it a lot worse, I think, primarily through the foreign borrowing. And also, of course, the austerity hurts, as well. But I think the main thing is that he’s now locked into it. And I think that’s part of the crisis, as well. He’s locked into austerity with the IMF agreement. And so investors know that the economy’s not going to get better any time soon. So he’s trying to build market confidence. But as we saw in the eurozone, that often has the opposite effect.

GREG WILPERT: So now we can expect even more austerity and even more economic decline for Argentina, at least from a near term?

MARK WEISBROT: It sure looks that way. And I think the- since the IMF is going to be monitoring them every quarter for the disbursements it will be forced. That’s not to say the economy can’t recover eventually. But in the short term it looks pretty bad.

And it does have some similarities with what happened back in the ’90s. You know, where they had four years of depression, and then they defaulted on their debt. Now, they don’t have a depression, now. The economy is slowing, they’ll probably have a recession. But they, the similarity is they get locked into a program that worsens the economy, and they try to build confidence in the markets, and everything that he’s doing is actually making it worse.

And there is one other similarity I think that most people haven’t noticed. I think it’s very important. And here’s where, you know, Macri makes a bunch of excuses for what’s happened to say it’s not his fault, and one of them is actually true. And that is the Federal Reserve raising interest rates now. And that is similar to what happened between 1994 and ’97, when the Fed raised interest rates. And that caused crises. The Mexican peso crisis. Contributed to the Argentine crisis at that time. The Asian financial crisis which began in ’97. And crises in Russia and Brazil. So that’s a really big thing we don’t have time to discuss at all now, but it shows how powerful the Federal Reserve is, and its influence on developing countries. Something that it doesn’t take into account, of course, when it decides on its monetary policy.

GREG WILPERT: Yes, that’s certainly something we’re going to have to revisit. I’m reminded also of how Turkey, for example, right now is facing a crisis partly because of the increase in the Fed’s rate.

MARK WEISBROT: That’s right. And those are, that’s an example of how countries that investors think are vulnerable- whether they should be or not is is another story- but the ones that investors think are vulnerable will take a hit, and we’ll have financial crises. And sometimes simply because the markets decide that they’re the ones that they need to run away from.

GREG WILPERT: Okay. Well, we’re going to leave it there for now, but will certainly return to the fish you are speaking to. Mark Weisbrot, codirector of the Center for Economic and Policy Research in Washington, D.C. Thanks again, Mark, for being here.