Why is Aid to Palestine Ineffective?

Policy analyst Jeremy Wildeman discusses his study of aid effectiveness to Palestine through the perceptions of development organizations and donors, highlighting how they tend to ignore the impact of the Israeli occupation on the Palestinian economy

Policy analyst Jeremy Wildeman discusses his study of aid effectiveness to Palestine through the perceptions of development organizations and donors, highlighting how they tend to ignore the impact of the Israeli occupation on the Palestinian economy 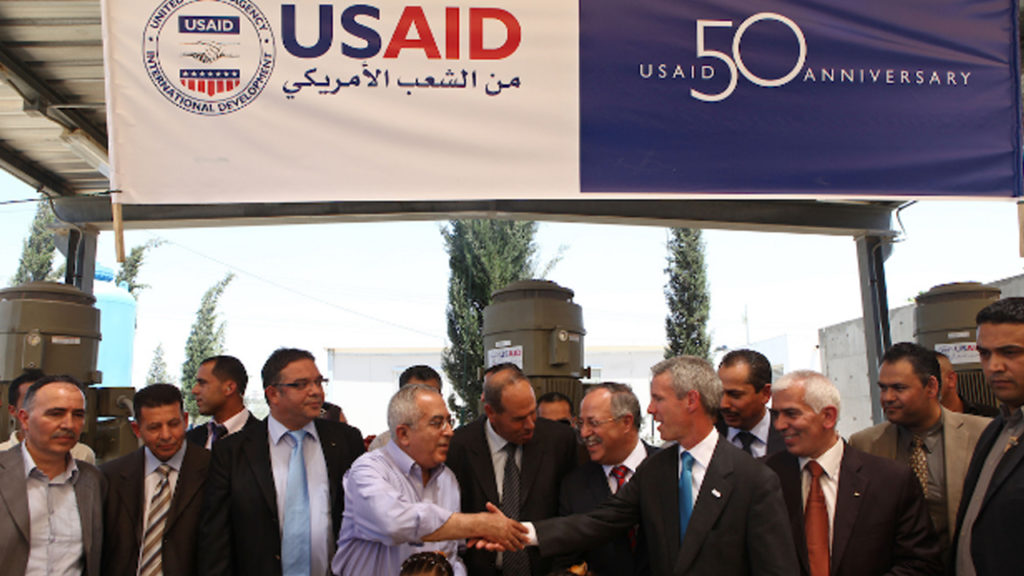 GREG WILPERT It’s The Real News Network and I’m Greg Wilpert in Baltimore. In presenting the economic part of President Trump’s so-called “deal of the century” to end the Israeli-Palestinian conflict, White House Adviser Jared Kushner presented a sterilized vision of the Palestinian economy in which there is no Israeli occupation and no widespread destruction of aid projects by Israeli forces. In the end, the plan gives the impression that only the Palestinians are to be blamed for the economic troubles. Here at The Real News, we recently interviewed Ali Abunimah about the recent summit in Bahrain in which Kushner presented the economic portion of the peace plan, but we did not address some of the outright falsehoods that Kushner uttered in presenting the deal. Here is an example.

JARED KUSHNER In recent years, instead of building on a history of innovation and entrepreneurship, the Palestinians became the highest per capita donor aid recipients in the world, with no plan or end in sight. I might be in the minority, but I believe that this can change. …Prosperity is not something that is given to people. Prosperity is something that is earned with smart planning, determination, and fortitude. The Palestinian people have these qualities—intelligence, strength, perseverance, courage— in great supply. Let’s harness these strengths and create the opportunity for them to succeed.

GREG WILPERT In fact, it’s not the Palestinians but rather the Israelis who are the recipients of the largest amount of per capita aid in the world since 1973. Most of this aid is military aid from the United States, but this is not to say that billions of dollars in aid haven’t been invested in the Palestinian economy and to support the establishment of a Palestinian state, especially since 1994. This begs the question, however, why then has the Palestinian economy stagnated over the past 25 years? Where has all the money gone? In essence, this is a question about aid effectiveness. The Policy Analyst Jeremy Wildeman recently wrote a book presenting research on the issue titled, “Donor Aid Effectiveness and Do No Harm in the Occupied Palestinian Territories.” Jeremy now joins us to discuss his research. He’s a Research Fellow at the University of Bath specializing in Palestinian development and Western relations with the region. Thanks for joining us today, Jeremy.

JEREMY WILDEMAN Thanks for having me, Greg.

GREG WILPERT So let’s start with the Bahrain summit. Kushner did not offer an explanation as to what happened to all the billions that were already invested in the Palestinian economy, infrastructure, job creation, industry, and transportation hubs. Can you tell us why this aid has not been effective so far? Also, do you think that there is anything in the so-called “deal of the century” that would avoid the mistakes of the past?

JEREMY WILDEMAN No, the “deal the century” is consistent with everything that’s happened in the past and it’s just an extension, but what it does is react to new realities on the ground, which is actively the annexation or probable annexation of the West Bank and East Jerusalem in a formal way to Israel. So it’s really an updating of the same processes and the same plans that have been under way since almost the 19—  from the US side— from the 1970s. Overall from the international community, since 1993, since the Oslo process got underway. This entire aid model’s based on the idea that you can ignore the context of the conflict, and somehow stimulate Palestinian economic growth and the development of institutions, and then, that this will lay the foundations for peace, but it’s not possible. I mean, you can’t actually undertake development in what is at best a conflict situation, without addressing the politics first.

GREG WILPERT So in your research, you focused on analyzing the perspectives of donors and of development agencies, and you used text analysis of oral and written reports. Give us some examples of what those perspectives are in organizations such as the World Bank, which manages so much of the aid to Palestine, and how do such perspectives affect the ability to build successful projects?

JEREMY WILDEMAN Yeah. First, I’ll mention, Greg, it’s not a book. It’s just book-sized. It’s a study of nine of the donors and it is about 200 pages long, so it looks like a book. But there’s, sort of, a clustering of approaches that I found and it’s really important to mention too here that those texts, the texts I looked at, are very political by nature. And this, in a way, reflects the politics of those organizations and it doesn’t necessarily reflect what the actual people working on these know. In many cases they might not agree with their own text, and this came up with the interviews with policymakers. Now, roughly, you could say that Canada, the US and IMF completely ignore the context of Israel’s occupation. In fact, you can read through their main documentation and you might forget that that’s an issue at all, so that’s reflected in what you hear from Kushner. The World Bank, you have that issue particularly from 2012 onward. They do have at times better analysis and recognition, that at least settlements are a problem, and you see that as well from the UK. With the Europeans, there is recognition that human rights are a core issue, and Israeli rule and the occupation and the settlement-building are undermining Palestinian statehood. One problem with the EU is even if they say this outright, it doesn’t mean it affects their overall policy. It doesn’t mean that they challenge Israeli rule or that they will challenge the United States’ approach.

GREG WILPERT Now, one of the aspects of your research is to compare between different actors on the world stage towards Palestinians, as you already mentioned. Now, the European Union has a different approach from the US, as you say, for example. And you mentioned in a recent interview with TRT that with the “deal of the century,” the European Union is taking a step back and is not offering any funding for this project, while the US is instead counting on Gulf states to be the main funders. Now, considering the different perspectives of the EU and the Gulf States, how do you think this will affect the form that aid will take towards the Palestinians?

JEREMY WILDEMAN Yeah. It’s really interesting. We don’t know for sure how the EU will land on this. In the end, the EU usually goes with what the United States wants in the Middle East. There is, [sighs] there is a lack of comfort necessarily now with how the US has been operating in the region in the last decade, but it could be that in the end, the EU will follow the US. For now, from what we’ve seen, it appears as if the EU would be a minority donor. Or, they might just keep funding projects as they’ve been funding since 1993— investing in education, in institutions, in the things that Palestinians need for their daily life, so their society does not collapse. With the Gulf taking over, it’s a much different type of donor. They’re going to be playing more of a realpolitik, so they want the Palestinian territories to be in a good enough situation that there’s some quiet there, that we don’t necessarily see another intifada, and one of the reasons is that they are looking at a larger confrontation with Iran— and in that case, the US and Israel in some way are their ally.

GREG WILPERT So, but what kind difference does it make concretely on the ground for the form that the aid takes?

JEREMY WILDEMAN Yeah. The Gulf donors, I mean, we can’t be quite sure yet, but they would be more interested in funding the Palestinian Authority itself and the security services perhaps. And this is something you’ve been seeing since the Second Intifada, where security is getting much more funding and the Palestinians are being pushed into security coordination with Israel, which relieves Israel of the need of patrolling Area A. So, say, the main Palestinian population centers. This is quite different from the Europeans who really, they do commit themselves to the original aim of Oslo— building democratic liberal institutions and stimulating growth through free trade.

GREG WILPERT Now finally, what are the Israeli perspectives towards international aid? Do Israeli authorities have a preference for certain types of aid that they would like to see being dispersed to Palestinians, and by whom? And what has the Israeli government’s reaction been to the “deal of the century?”

JEREMY WILDEMAN Well, the “deal in the century” is quite a deal for them, right? I mean, some of their closest allies in the US in this very close US administration have developed it, so they should be pretty happy with how the process has moved along. Historically, the US has reinforced the two-state solution as a way to moderate its alliance with Israel and its other regional allies. Now, as far as this aid is concerned, largely you can say that the Israeli government has welcomed it. It has offset many costs for Israel. Normally, especially when we’re talking 50 years, an occupying power should be covering the costs of the administration of an occupied people— if not, granting them outright citizenship. In this case, international donors have stepped in, in particular since 1993, to cover those costs. Now there’s an internal debate you can see, and I think another Real News expert, Shir Haver, will know a bit more on this, but from what I understand and Shir has influenced my own perspective on this, is that it’s a bit of an internal Israeli debate where the more liberal and the military camp will welcome that aid to support Palestinian institutions. But the more right-wing— let’s say, the Likud-style politicians— will prefer funding for security coordination.

GREG WILPERT Okay. Well we’re going to leave it there for now. I was speaking to Jeremy Wildeman, Research Fellow at the University of Bath. Thanks again, Jeremy, for having joined us today.