What is NATO Good For?

As foreign ministers gathered in Washington to celebrate NATO's 70th anniversary and deliberated about its further extension, prominent peace activists also gathered to present a critique of NATO. Carmen Russell reports from DC

As foreign ministers gathered in Washington to celebrate NATO's 70th anniversary and deliberated about its further extension, prominent peace activists also gathered to present a critique of NATO. Carmen Russell reports from DC 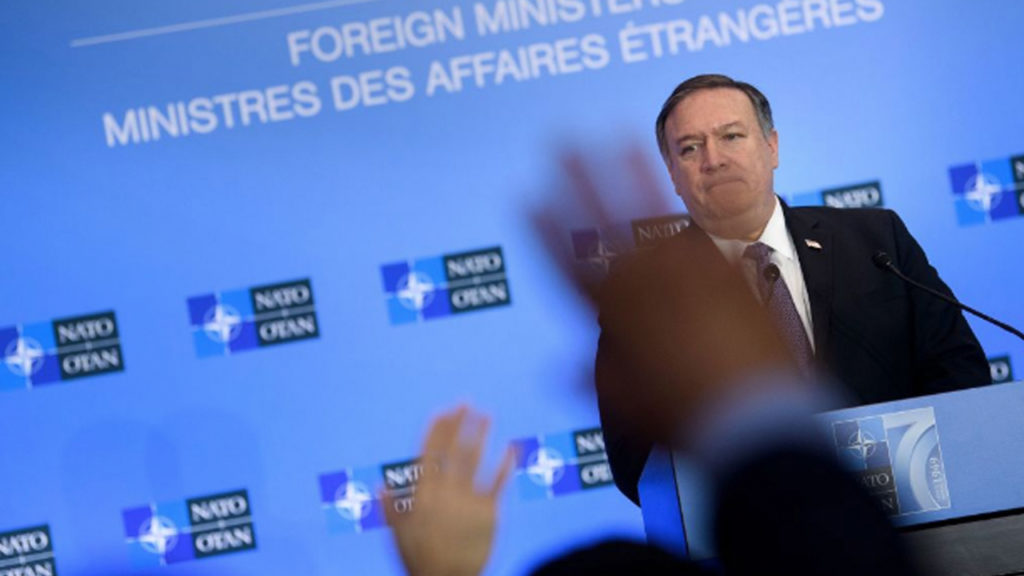 DONALD TRUMP: By 2020 I think we’ll have at least another hundred billion dollars spent by the Allies, the other countries, the 27 countries outside of ourselves.

SPEAKER: Exactly 70 years ago the North American Treaty Organization was originally started by the United States, Canada, and 10 European countries with the intent to contain the Soviet Union. It now has 29 members and an expanded mandate.

DONALD TRUMP: We really increased the scope of NATO. We said, you know, we have a new world problem that’s not so new anymore, but it’s called terrorism, different than when you were originally founded.

SPEAKER: Trump has reportedly and even admittedly threatened to withdraw from the military alliance he has previously called obsolete. However, despite these threats it’s clear that the Trump administration plans to stay married to the pact, as evidenced by his meeting with Stoltenberg and comments made recently by Secretary of State Mike Pompeo in a recent visit to Budapest, Hungary.

MIKE POMPEO: Today I spoke with the Foreign Minister about the urgent importance of supporting Ukraine in its quest for sovereignty and territorial integrity. We must not let Putin drive wedges between friends and NATO. Hungarians know all too well from their history that an authoritarian Russia will never be a friend to the freedom and sovereignty of smaller nations.

SPEAKER: Matthew Hoh has served in the U.S. Marine Corps, Department of Defense, and the State Department, and served in posts in Afghanistan and Iraq. He believes that Trump’s tendency to assail the alliance bloc is merely a political stunt, and that NATO expansion policy won’t be changing anytime soon.

SPEAKER: Proponents of U.S. membership in NATO continue to use the specter of an aggressive Russia as a primary reason. But critics see it as likely to provoke Russia rather than keep peace on the continent, particularly as talks continue around the admission of Georgia, a nation that borders Russia. Hoh made the case recently at a discussion at the National Press Club, which was sponsored by Roots Action.

MATTHEW HOH: NATO is extremely dangerous, as well, too, because of potential conflict with Russia. As we’ve expanded up to the Russian border, as we have based our troops around the Russian border, conducted exercises, the Russians have reacted as you would expect a nation to react. And so we are on the brink of war. And this is not the way it should have been, as it was promised with the end of the Cold War.

SPEAKER: In her 29-year career in the Army and Army Reserves, Colonel Ann Wright served at the NATO subcommand Allied Forces Central Europe, and later as a diplomat in various posts around the world, but resigned from the U.S. government in protest of George W. Bush’s war on Iraq. She agrees with Hoh that NATO is an impediment to peace in Europe.

ANN WRIGHT: It’s dangerous because it requires a response from the Russian government, and they, then, have now started the largest exercises they have had since the Cold War. So it becomes very dangerous. If one starts and the other responds in the same manner, which is normally the way it happens, then we’re all in big trouble.

SPEAKER: Martin Fleck of Physicians for Social Responsibility argues that the combination of the Trump administration’s push to pull out of nuclear non-proliferation treaties while NATO continues to push up against Russia’s borders is a recipe for disaster.

MARTIN FLECK: So if you combine the United States unilaterally withdrawing from the antiballistic missile treaty, then the Iran nuclear deal, which Russia was a party to, and now threatening to pull out of the Intermediate Range Nuclear Forces Treaty, that combined with the apparent expansion of NATO right up to Russia’s borders, it seems needlessly provocative. It seems reckless. Seems like a reckless policy in combination.

SPEAKER: Given the dangers, Wright and other critics argue that the real driving force behind the expansion of NATO is related more to finance than security.

ANN WRIGHT: I think it’s the military industrial complex that needs more weapons sales, and the Russians have always been the bogeyman for the United States from the Cold War period. And even though we had 20 years of peace and tranquility with the Russians, now they are being vilified again. Not to say that it’s–you know, there are some things they’ve done I don’t care for at all. But the the fact that now they are the enemy, and the increase in the number of weapons all the countries are manufacturing and selling, is big business.

SPEAKER: That may also help explain NATO’s expanded mandate, with forces landing as far as the Middle East and other hotspots around the world.

MATTHEW HOH: NATO conducts military operations around the world, now, to include wars that include mass killing and suffering in places like Libya and Afghanistan, and not doing well, not doing well for the world. Not where you can point and say, look, we resolved this conflict, but rather these conflicts are open-ended with the suffering continual.

Is the Turkish-Russian S-400 Missile Deal Sabre Rattling Among Superpowers?

The Anti-Democratic Roots of NATO