Why did Edgardo Lander and the Citizens Platform for the Defense of the Constitution meet with Juan Guaidó? The potential for violence, military intervention, and even civil war, made it important to find ways to de-escalate, says Lander

Why did Edgardo Lander and the Citizens Platform for the Defense of the Constitution meet with Juan Guaidó? The potential for violence, military intervention, and even civil war, made it important to find ways to de-escalate, says Lander

Edgardo Lander on Solutions to the Crisis in Venezuela 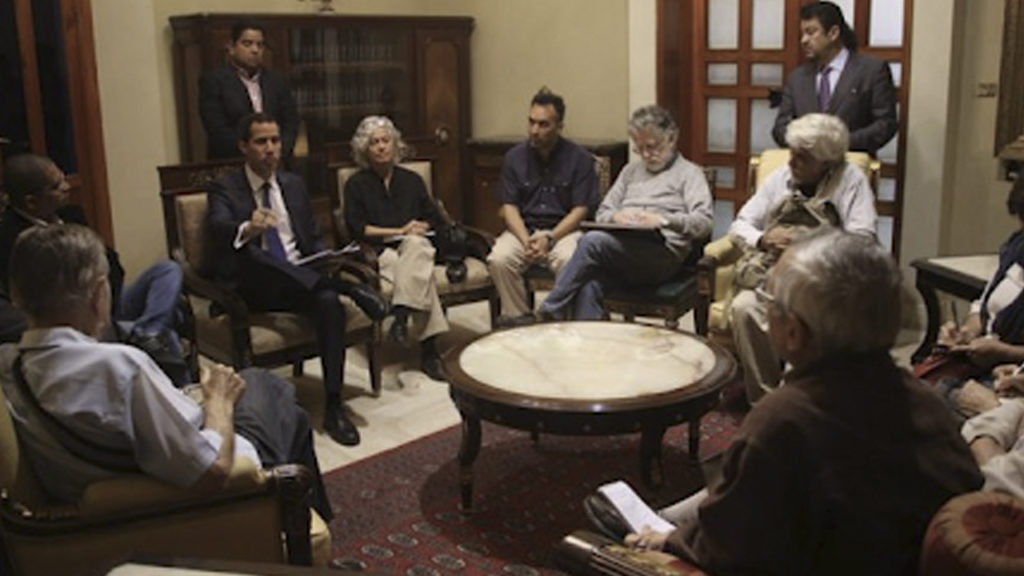 SHARMINI PERIES: This is Sharmini Peries, coming to you from Caracas, Venezuela. This is Part 2 of my discussion with Edgardo Lander on the Venezuelan crisis.

Lander is a prominent left-wing academic, professor emeritus at the Central University of Venezuela, and fellow of the Transnational Institute. He did his Ph.D. at Harvard University, and he has written numerous books and research articles on democracy, the limits of industrialization and economic growth, as well as left-wing movements in Latin America.

Edgardo, you’ve come under a great deal of criticism from the left for meeting with Juan Guaido, the self-proclaimed unelected president of Venezuela. They say that you have legitimized him in this self-proclamation by meeting with him. So let me ask you, Edgardo, what was going through your head while you were waiting for Mr. Guaido? Now, this man has called on the U.S. to intervene and invade your country. So why did you feel it necessary to meet with him, and what did you want to achieve?

EDGARDO LANDER: The Citizens Platform in Defense of the Constitution, of which I’m a part, has been analyzing the political situation in the country for quite some time. In this present situation, we see that the threat of an escalation of violence, the possibly of U.S. military intervention as has been threatened over and over by the U.S. government, and even the possibilities of civil war–t’s something that will not necessarily happen, but it could happen–and there’s an urgent need to downscale this confrontation and find some nonviolent solution. It is obvious that both sides in this confrontation are quite strong in their ways. The Maduro government still has some popular backing. Not what it used to be at all. It’s a minority now, but it’s still some backing. But it obviously has control of the state apparatus and it has control of the armed forces. That’s a big deal.

On the other side, Guaido represents an opposition to the Maduro government. In the current situation of deep crisis, Venezuelans are, to a large extent, desperate for a change in government. But the most important strength of the Guaido side of this conflict is obviously the U.S. government and the threat of intervention.

We considered in the Platform that it was absolutely necessary to find nonviolent ways of looking for an outcome that does not lead to violence. The situation in Venezuela is dire enough as it is without armed intervention, without a civil war. We urgently need some agreement that would allow for some sort of negotiation that does not lead to increased violence and war.

For that reason, we decided that it was absolutely necessary to talk to both sides of this confrontation, and the two sides in institutional terms are president of the Republic on one side, and on the other side the National Assembly. These are, in constitutional terms and institutional terms, the two sides of the confrontation. In practical terms, it’s the two sides, the government on one side and the U.S.-backed opposition on the other side. We decided that in spite of acknowledging that there were great political risks for us in attempting to talk to both sides, we decided that since the risk of the civil war was so huge, we felt that we had the responsibility to try to avoid it and try to get both sides to recognize that they both had a responsibility, and that their very irresponsible behavior in the current situation could get out of hand and could lead to a violent confrontation.

We met Guaido. We didn’t meet Guaido as president or self-proclaimed president. We met Guaido as president of the National Assembly; and we told him exactly what I’m saying now: You are assuming a very irresponsible risk. This escalation could lead to civil war. Your call for U.S. backing could lead to U.S. intervention. This is a grave threat to the future of the country, and we ask you to reconsider and to acknowledge that there’s no possibility of going forward in the solution of the present crisis in Venezuela unless there’s some minimum level of agreement. And the agreement that we’re talking about is an agreement that would call for giving the Venezuelan population a voice, giving the people in Venezuela the capacity to decide whether they want to keep the present government, the present president, the president National Assembly. And for that we would call for a national referendum asking people one simple question: Do you agree that there’s a need to have new elections for all national elected officials? That’s the only question. But the agreement would also require previous agreement on a consensual national electoral council, because the current electoral council is not trustworthy for the majority of the population in Venezuela.

Those are the main issues that we presented to Guaido. And at the same time we were establishing sort of backstage contacts with the Maduro government to have a similar conversation with Maduro. None of that led anywhere, so we decided to write a letter to Maduro explaining the purpose of the meeting, explaining why we thought that some sort of negotiation was required if we wanted to avoid a civil war. And we wrote the letter asking for an audience with Maduro about these issues and explaining why we met with Guaido with the same purpose.

We took this letter to the palace of Miraflores for three consecutive days to be received at the office where they receive correspondence, and for three days they refused to receive the letter, so we still don’t have a stamp saying that the letter was received in Miraflores, so we decided to make this letter public. We put it in [Aporrea], we distributed to different networks, et cetera, via social media, et cetera. But we haven’t had success in getting this agreement.

SHARMINI PERIES: When you say “we,” who do you actually mean?

EDGARDO LANDER: I’m talking basically of the people who are responsible for this, since you asked about the Guaido meeting, about the Citizens Platform in Defense of the Constitution. This was created some [four] years ago. And it was created in this highly, highly polarized society, not as a third way, as a Blair third way, or anything like it, but assuming that the constitution, which is a very progressive constitution that really introduces enormous changes, possible changes in Venezuelan society, in terms of rights, in terms of mechanisms of participation, in terms of many other issues, Indigenous rights, that in this confrontation, this highly polarized society, the constitution was being attacked on both sides.

On one side, the government was not following the constitution. It had decided to remain in power no matter what. If that meant doing away with many, many central, core issues of the constitution, tough luck. On the other side, we saw in the coup in 2002 that the first thing they did was to abolish the constitution–for two days, but that’s what they did. We thought that a constitution could possibly be a common ground on which Venezuelans could get together and agree on respecting the constitution as a way of avoiding this violence that has been escalating for so long.

So we have been working on different issues in terms of respect of the constitution, of the evaluation of laws. We have been very active in announcing the Orinoco Mining Arc, which is probably the most severe environmental crisis in the whole of Latin America today. It’s 12% of the national territory. It’s the homeland of 8 to 10 different Indigenous people. It’s part of the Amazon Basin, which is a very critical part of the systems that regulate the climate of the planet. It’s the main source of water in Venezuela. It’s the source of greater biological diversity in the country. It’s the source of 70% of the hydroelectricity that we consume in the country. So it’s an incredibly critical area, and it’s been opened up to transnational mining in a completely anti-constitutional and illegal way, because it violates not only the constitution but Indigenous laws, labor laws, environmental laws.

This was decided by Maduro just by decree, with no debates whatsoever, and it’s going to have a severe impact on the future of our country. Right now there are tens of thousands of irregular miners that are destroying this territory, and the Indigenous people are being highly impacted.

Edgardo Lander is a professor of social sciences at the Universidad Central de Venezuela in Caracas, and he is a member of CLACSO and the Hemispheric Council of the Social Forum of the Americas. His books include Modernidad y Universalismo (1991) and Neoliberalismo, sociedad civil y democracia (1995), and his academic writing has been published…