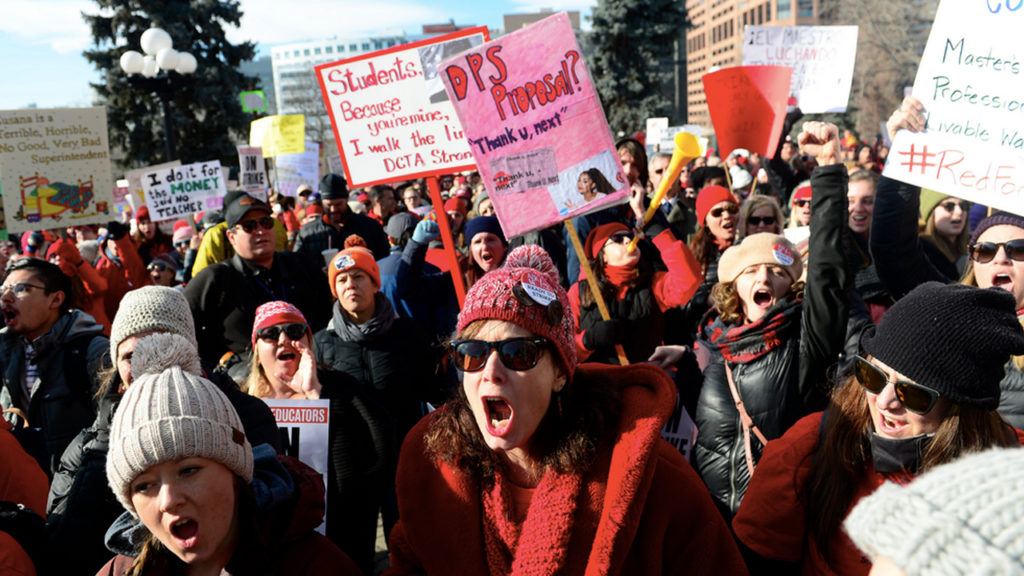 SPEAKER: I so deeply admire the passion that motivated teachers to advocate for themselves. It’s a passion that I deeply appreciate.

SPEAKER: I’m happy to be back to work today. I’m happy to be at school. It’s nice to see the kids and smiling faces. Everybody has been welcoming, and hugs all the way around, and thankful that I’m here, so that was a good feeling.

The Denver teachers union reached a tentative deal on Thursday to end their week-long strike. Among their main concerns was low pay and an overemphasis on merit pay bonuses for student test scores that would force their salaries to wildly fluctuate year to year. Teachers must still approve the deal. This is just the latest on an ongoing national wave of teacher strikes and protests across the country against privatization and so-called education reform advanced by billionaires that many educators see as an attack on their profession.

Joining me to discuss this is Eric Blanc. His upcoming piece in Jacobin is titled Denver Teachers Win Step Forward. He’s a former high school teacher and the author of Red State Revolt: The Teacher Strike Wave and Working Class Politics. Thanks so much for joining us, Eric.

ERIC BLANC: Great. It’s good to be on.

JAISAL NOOR: Give us your reaction to this deal that was reached, announced this early this morning. You’ve been in Denver talking to teachers, parents, and students.

ERIC BLANC: Yeah. The first thing they say is that it’s a victory. Strikes work. And the Denver strike, just like Los Angeles before that, has shown us very clearly. The big win is around pay. There’s a 7-11 percent pay increase across the board. And there’s also a step away from the reliance on a merit pay system. What the teachers were able to get is more what they call steps and lanes, in which there’s regular increases that aren’t just tied to things like test scores, or student learning objectives, which can be variable and really not a solid way for teachers to be able to survive and make a living in a place like Denver, where housing costs are skyrocketing.

JAISAL NOOR: And so talk more about that. Do you think the teachers got what they really wanted?

ERIC BLANC: Well, look, in every strike, you–it’s very rare in a strike, let’s say, to win everything you want. I think that major gains were won. But to be real, some of the demands around merit pay that the union and teachers had raised were not achieved in this contract. One of the points of contention was whether the district would continue to have very large bonuses for certain high-needs schools, whereas the teachers union were fighting for really across the board pay raises. So what they won was an across the board pay raise, but some of these incentives that really are part of the privatizers’ handbook remain. So it was not a 100 percent victory, but most teachers I spoke with this morning feel good about the settlement.

JAISAL NOOR: And so this idea of merit pay, which was, you know, helped advance during the Obama administration, talk about why educators see that as problematic. I mean, some educators, for example, say that it causes competition between teachers instead of collaboration, because if your students’ test scores are better then you get more money. What’s the what’s the issue? Talk about the issues with that.

ERIC BLANC: Right. You know, it sounds good on paper. Teachers should make more if their students are doing better. The problem is that the data doesn’t actually prove this. There’s no evidence, in fact, that giving bonuses to teachers is actually improving student learning–for one reason because, to be honest, standardized testing is a very imprecise measure of what actually education is. So even on that criteria, the idea of merit pay is a really flimsy one.

And specifically what happens is when you introduce merit pay, as you mentioned, it pits teachers against each other, but it also forces teachers to start teaching to the test instead of focusing on developing students’ actual learning and critical thinking skills. What it does is that it makes teachers dependent on their students’ increased test scores so that they themselves can survive. And so it’s a really twisted system. Really the solution for improving student learning in schools in general is more funding, better pay for teachers so that you don’t lose teachers after a year or two. But instead of that type of policy, really what the billionaire privatizers of trying to do is lead the schools, and then force teachers out and force teachers against each other through things like merit pay.

JAISAL NOOR: And so you’ve written and documented about this wave of strikes we’ve seen over the last year, and really beyond that, but especially over the last year, starting in red states, often in places where it’s illegal to strike. Just a couple of weeks ago there was a strike in my home school–or there was a protest in my home school district in Baltimore County. And I talked to teachers there. And you know, it’s a wealthy suburban school district, especially–more so now than when I was going there, you know, 15 years ago. But you know, teachers everywhere seem like they’re inspired by these actions they hear about. They talk about it. Talk about what your sens is of this movement, and what it means for the labor movement, which is generally on the decline.

ERIC BLANC: Yes. The first thing to say is really that for years, for decades, working class people in the United States have to feel disempowered. They felt resigned to accepting conditions around them. I don’t think it’s true that people are brainwashed or people are conservative like it’s usually said. But if you don’t have a sense of power you’re not going to fight back.

And so what we’ve really started to see, beginning in particular with the West Virginia strike of last year, and then with the strikes spreading across the country, is all of a sudden educators in particular but workers more generally have seen that they do have power, and that by withholding their labor they can really force the people up top to listen to them and meet their demands. And so that’s an extremely powerful idea. It’s a genie that’s hard put back into the bottle, as far as the powers that be. And so that’s the reason, basically, why this teachers strike wave is continuing and is likely to keep on spreading. Because, you know, the question of how you’re going to win better conditions has been at the fore for years for teachers. They realize that the problems of schools, that’s not new. What’s new is that people now have a sense what it’s going to take to win and how to win. And I think that there’s starting to be signs that this isn’t just in education. If you look at how the federal government shutdown was ended by the sickouts, if you look at the talk about new work actions to stop Trump. You know, this idea of bringing back the strike is a very exciting one, and it’s a very new one in the United States.

JAISAL NOOR: Do you feel like the conversations are on education are changing now that the–sort of this bipartisan consensus on this top-down reform. Do you think cracks are–we mentioned how it was under the Obama administration and Race to the Top where you really saw the spread of these these merit pay bonuses. And actually, Baltimore was the first city to adopt that contract. And initially the teachers rejected it, and were forced to vote on it again. But do you think that some Democrats are sort of coming around to this, especially since it’s union members which generally support Democrats that are on the front line voicing concerns with these type of reforms?

ERIC BLANC: Well, you know, that’s a tricky thing to answer, because as you mentioned and alluded to, these policies have been bipartisan. And so the Democrats and Republicans have been equally responsible for the privatization and austerity. So what’s really exciting about Denver and Los Angeles and Oakland, which will be going on strike soon, is that unlike last year these are strikes directly against the Democratic Party establishment.

So I’m not sure it’s a question of the Democratic Party leadership seeing the light now and listening to teachers, because teachers have been asking them for years to change its policies. I think it’s more a question of workers forcing the Democrats to listen to them, and forcing the Democrats to make some concessions. That being said, it’s not clear how far the Democratic Party establishment is willing to go to reverse questions of privatization. Generally speaking, the Democrats, unlike people like Bernie Sanders and Alexandria Ocasio-Cortez, have said they support the teachers and their demands for fair wages, but they haven’t talked about privatization, they haven’t talked about charters; really the issues that are underlying this strike upsurge.

So I think it’s probably going to take a lot more struggle to force the Democrats either to meet the demands to reverse this privatization wave or create a new political instrument that can really implement directly the teachers demands.

JAISAL NOOR: OK. Eric Blanc, thanks so much for joining us. Author of Red State Revolt: The Teacher Strike Wave and Working Class Politics. Really appreciate it.

ERIC BLANC: Thanks. It’s great to be on.

JAISAL NOOR: And we’ll link to your piece at TheRealNews.com. Thanks so much for joining us.