Well-known Venezuelan writer and theorist, Reinaldo Iturriza, says US sanctions and the low price of oil have devastated Venezuela'seconomy

Well-known Venezuelan writer and theorist, Reinaldo Iturriza, says US sanctions and the low price of oil have devastated Venezuela'seconomy 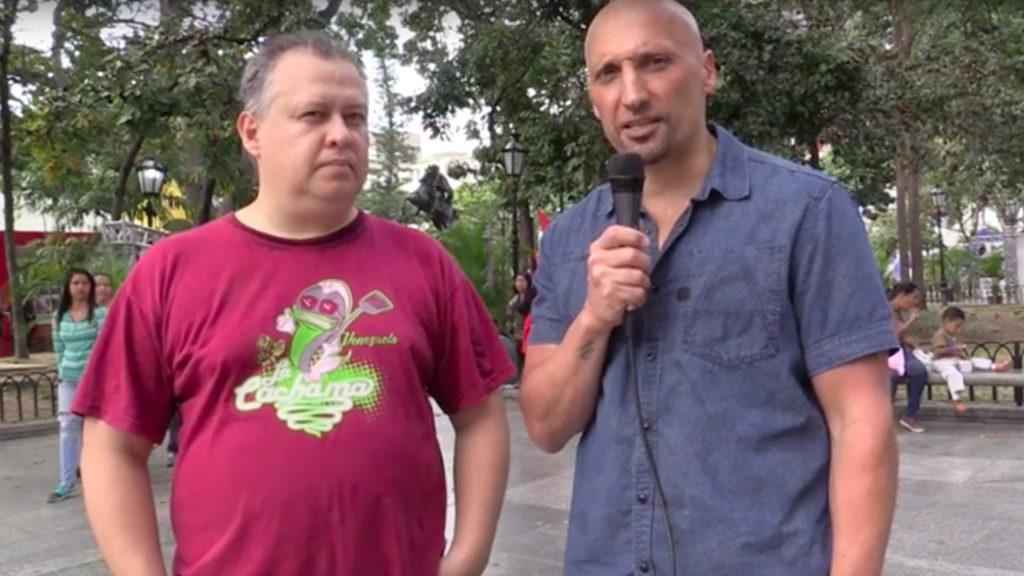 DIMITRI LASCARIS: This is Dimitri Lascaris reporting for The Real News from Caracas, Venezuela. Today I’m in Bolivar Square. The people are gathering because the Maduro government has asked supporters to come forward and sign a petition supporting the government and expressing their opposition to efforts by foreign powers to replace the current government with that of Juan Guaido.

Thank you very much for joining us today.

REINALDO ITURRIZA, FORMER MINISTER OF COMMUNITY AND CULTURE: Thank you for the opportunity.

DIMITRI LASCARIS: In the West there’s a debate raging about the causes of the crisis in Venezuela; the economic crisis. On the one side, those on the right of the political spectrum say that the cause is that this is, essentially, a socialist economy that has been mismanaged; it was doomed to become an economy in crisis because of its socialist nature. On the other side, on the left, you hear people saying that the real cause of the crisis is external pressure, and particularly sanctions that have been imposed on Venezuela. What do you think the true causes of this crisis are?

REINALDO ITURRIZA: We have to have a more rigorous approach to the historical circumstances that Venezuela is going through. It is absolutely unfair. And you’ll ignore a large part of reality if you are not looking at the terrible effects that the sanctions imposed on the Venezuelan people have had.

Because it has been published a lot that the sanctions are against the party leadership, and yes it began that way in 2015, but since then, there have been sanctions against the oil industry and then the ban on American and worldwide economic agents and institutions to deal with the Venezuelan government.

Also, the difficulty buying medicines and food has caused us great damage. It’s not a tale, it’s not propaganda by our government.

All this is particularly challenging for our society and the Bolivarian Government in the context of low oil prices, since 2014-2015.

Not coincidentally, it was in such context that the sanctions began to be applied. Those sanctions were conceived to make it difficult for the Venezuelan government to recover from an already critical economic situation due to the drastic fall of oil prices.

Then you could consider a number of things, like why while oil prices were high, which allowed the redistribution of the wealth, which was a political decision that allowed the material and symbolic betterment of the Venezuelan society and its people.

Why wasn’t a portion of that wealth used, then, to support the economic system a little better, that is an ongoing debate. That’s the debate, or part of the debate, that is constantly delayed.

Because it’ll look like our government was incapable of understanding the importance of taking that money and investing it in the productive sector.

There was a systematic effort to strengthen the economy. Why it didn’t work? Or to which extent didn’t it work? Why did it happen that way? That is part of what needs to be discussed.

Now, the situation we have. You are probably here in Venezuela because an aggression once again is in the works.

There is an attempt to ignore the legitimacy of a president, who is there not because he is a dictator or that is what he wants, but because that is what the majority of Venezuelans decided.

And then that shameful and annoying act happened, where after a public demonstration a guy from the National Assembly claims himself as the president, which is then recognized by the U.S. government, along with other Latin American countries, and more recently Europe.

Meaning that is an aggression which can not be tolerated at all.

There are Latin American governments which are profoundly antidemocratic, and there they are. Since they are aligned with U.S. interests, nobody says a word about that. In Colombia, right on our doorsteps, everyday crimes are committed against social leaders, and nobody says a word about that. So for you to tell me that the Venezuelan crisis is due to corruption and incompetence by the government, which to some degree may be real, or because we used to have a lot of oil, and we don’t have it anymore. It is a really limited and untrue way of describing the Venezuelan reality. It is borderline propaganda.

DIMITRI LASCARIS: In your view, what is the single biggest mistake that the Maduro government has made in terms of management of the economy?

REINALDO ITURRIZA: I think the president is making an effort to carry on with a delicate economic situation, fundamentally due to the drastic decrease in the price of oil, and there is also an extraordinary difficulty to resolve any problem. Because since 2015, every effort is being made to make sure that the government can’t overcome any problem.