Journalist Eirik Vold says the United States and NATO are further militarizing Scandinavian nations, while claiming Russia poses a threat of war. US military presence is growing in NATO members like Norway, as non-members Sweden and Finland are being pressured to join

Journalist Eirik Vold says the United States and NATO are further militarizing Scandinavian nations, while claiming Russia poses a threat of war. US military presence is growing in NATO members like Norway, as non-members Sweden and Finland are being pressured to join 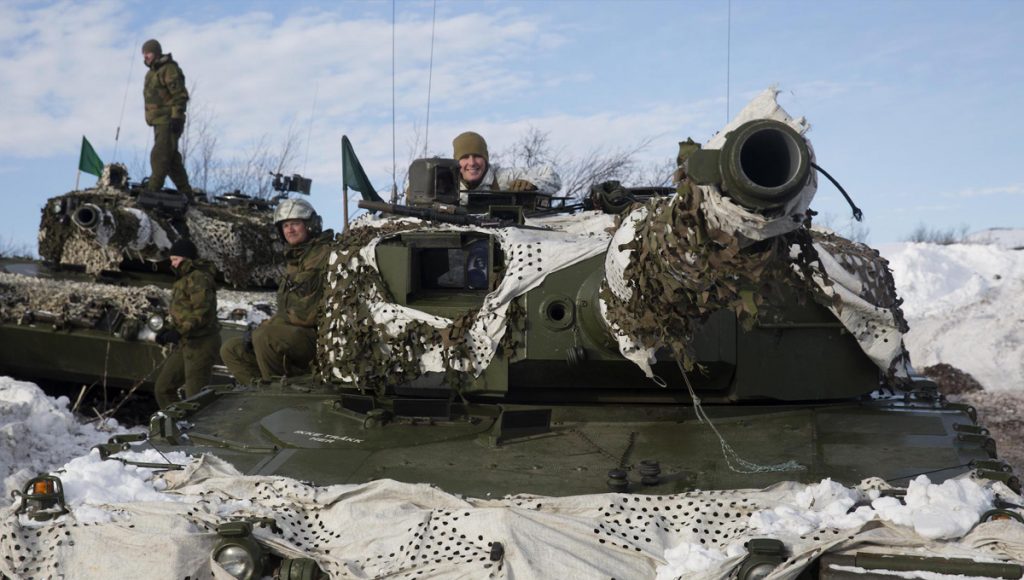 I’m continuing my discussion here at the Real News with Eirik Vold. Eirik is an investigative journalist from Norway. He is also an author, and he is currently a political adviser for the Red Party in the Norwegian parliament. We’re discussing the relationship between Scandinavia and NATO, and the remilitarization of some of the Scandinavian countries, particularly Sweden. But we’re also going to talk about Norway, Finland, and Denmark. And specifically, in Part 1 of our discussion we spoke about the Swedish government’s initiative to send pamphlets to all 4.8 million households, warning of a potential war. And of course, the kind of new cold war that is has emerged between NATO countries and Russia. We’re going to continue our discussion here talking about NATO.

EIRIK VOLD: Now, this is not something that’s only going on in Sweden. There is, there is in Scandinavia, Norway is also experiencing a similar, a similar development. I mean, Norway was, joined NATO many decades ago. But we are experiencing today a clear break with with past, past policies of not permitting foreign military bases on Norwegian soil. We had the so-called bases, military bases policy that was established, if I’m not mistaken, in 1949 here in Norway, and it clearly stated that there should be no foreign military bases on Norwegian soil.

Now, this has been hollowed out, or practically just scrapped right now by the Norwegian government, as we have already permitted the presence, the permanent presence of 300 U.S. Marines and bases in middle Norway, and have a place called Vaernes, which is also a very strategic location in terms of flights towards the Baltic Sea and towards the Russian border. This has happened without any democratic debates. It has happened without a democratic process. And basically it’s been negotiated behind closed doors, between probably a U.S. official or NATO officials and Norwegian officials, and Vaernes is not, could be not the only place where the U.S. is increasing their presence in Norway. We have, we also have an airbase in southern Norway called Rygge. This base was closed down for civilian air traffic a couple of years ago, but it’s now about to open up for US presence. It’s been, while the Norwegian government gave absolutely no information about this, this appeared on the budget of the U.S. armed forces, the U.S. military, as an investment of of around a million dollars or so, if I’m not mistaken. I might have to look at that exact number again. But it appeared first on the U.S. military budget as an expense to adequate this Rygge airport in Norway for, for it to be able to host American war airplanes. This is another base, which has also got a very strategic location towards the Baltic Sea.

And there’s a third area where the U.S. is also expanding their, their military presence, or seems they’re expanding their military presence there, which is, which is the far north. This is another area of extreme strategic importance, mostly because it’s, it’s very much closer to the Russian border than all the other places mentioned. So it’s not just for, for closing in on Russia on the, through, by the Baltic Sea. But this is also a place where you, where you can circle Russia in the far north, pretty close to the coal [inaudible] Russia has some of its most strategic, sensible bases and capabilities.

So we are closing up, practically the whole of Norway’s territory is being used to close in on, on Russia. And while any sensible Norwegian region certainly is wary about Russia, and wary about such a big military power close to a normally historically peaceful and much weaker nation than Russia, there are always reasons to worry in such a situation, but I’m very unsure, and many Norwegians wondered if this, if this increased U.S. militarization actually increases our security levels, or if it provokes Russia in such a way that it increases the risk that the big great power rivalry between Russia and the US is being taken unnecessarily into Norwegian soil.

BEN NORTON: Yeah that’s a great point. And we have to wrap up here in a moment, but really briefly, I wonder if we could just take a step back and also talk about Scandinavia as a whole and its relationship to NATO. You mentioned, of course, that Norway is a longtime member of NATO, and as is Denmark. Sweden and Finland are not members of NATO. And polls in the past several decades, they have traditionally shown widespread opposition to joining NATO. In the past several years, however, we’ve seen a reversal. And in fact this year, 2018, a recent poll showed for one of the first times in years that a plurality of Swedes support joining NATO. Can you comment? And do you think that we could see in the near future Sweden, and maybe even Finland, joining the North Atlantic Treaty Organization?

EIRIK VOLD: Well, Sweden has been, the Swedish population has been, and it hurts to say it, but they’ve been victims of a process of scaremongering. There’s absolutely no doubt about that. There’s been, for a period, you would see almost daily front pages with the, with the supposed war threats from Russia, threatening news from Russia, every single day on television, on major news outlets. And with very little backing, very little evidence that this threat actually existed, or that there was any basis for those scary headlines and front pages. So this has definitely had an impact in Swedish public opinion, and there’s very little that can be done for the skeptics, because their access to the mainstream, the mass media, is certainly a lot more limited than the access of those interests who want Sweden to become a member of NATO, and wanted to at least create closer ties between Sweden and its U.S.-dominated military alliance.

As of Finland, there’s been a similar process going on. Finland has also granted increased access to NATO, to its territory. As of Denmark, Denmark has for a long time been more of a so-called Atlanticist country in the Scandinavian context. Some might remember that the former secretary general of NATO was was a Danish, an ex-prime minister, Anders Fogh Rasmussen from Denmark, who was, by the way, it seems he was rewarded for his support for the Iraq war, because after that he became the secretary general. And there was a similar, there was a similar move when the Norwegian ex-prime minister Jens Stoltenberg became secretary general of NATO. He still is. This happened some years after Stoltenberg played a very important role in making Norway, to have Norway join the military campaign against the illegal regime change war against Libya, and convincing even the Swedes to join that failed regime change war.

So, so the currency is clear. What we don’t know is what does Scandinavia gain from this? If you look at a broader European picture, it’s clear that whenever the U.S. sort of makes the relationship to Russia more difficult, we pay, Europeans and especially Scandinavians, pay a much higher price than the U.S. authorities, because we are a lot closer to Russia. And we lose out a lot more money from trading, deteriorating trade relationships. We lose out on deteriorating environmental cooperation that has always been very strong between, for example, Norway and Russia. And we lose out on necessary security cooperation that we’ve always had, even though we have politically disagreed to a very high extent both with the Soviet Union Communist regime and the current Putin regime. But we still have had, this cooperation has really been, been beneficial to us, which is something that even U.S. officials admit in cables, in WikiLeaks cables that were released in 2011 from from the U.S. Embassy in Norway.

So what do we gain from joining this this escalation of confrontation against Russia? It’s very unclear. And I think one of the reasons that ex-Vice President Joe Biden expressed himself in the, along the lines of we had to bully or pressure Europe into implementing sanctions against Russia, was that this is clearly not in the interest of Europe. And I think this is also the case in terms of Scandinavia being sort of selling out or caving in to U.S. pressures to, to leave our traditional policy of neutrality and of cooperation, of reaching out to both the U.S. and the Eastern Bloc, and later Russia.

BEN NORTON: Well, that’s going to have to be the end of our, the second part of a discussion here with Eirik Vold. Eirick is a Norwegian investigative journalist and author. He is also a political adviser to the Red Party in the Norwegian parliament. Thanks for joining us for both of these parts, Eirik.

EIRIK VOLD: OK. Thank you so much.