As the demand for single-payer health care in the US becomes mainstream, the New York Health Act could lead the way. TRNN's Ben Norton speaks with Ursula Rozum of Physicians for a National Health Program, who says NY state could soon adopt a universal system

As the demand for single-payer health care in the US becomes mainstream, the New York Health Act could lead the way. TRNN's Ben Norton speaks with Ursula Rozum of Physicians for a National Health Program, who says NY state could soon adopt a universal system 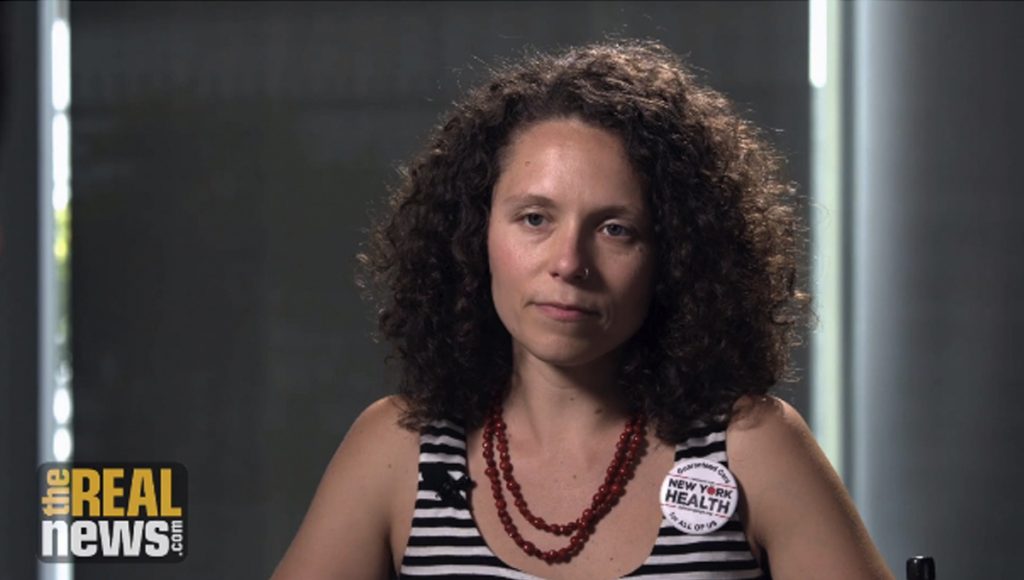 I’m joined by Ursula Rozum, who is an organizer with the New York Metro chapter of Physicians for a National Health Program. Today we’re going to talk about the growing campaign that could potentially soon be successful for single payer healthcare in the United States. We’re going to start talking about the campaign in New York, New York State, and then talk about the National Campaign for Single Payer Health Care. Thanks for joining us.

URSULA ROZUM: Great to be here.

BEN NORTON: So can you talk about the work you’ve been doing here in New York State?

URSULA ROZUM: In New York State, I work with Physicians for a National Health Program. And we are one of the founding organizations of the Campaign for New York Health, which is a campaign to pass the New York Health Act, a bill to establish a universal single payer health care system in New York. And it’s really a statewide coalition of over 400 organizations that have endorsed this bill led by PNHP, who I work for. And also the New York State Nurses Association are very involved.

And this is a bill that’s kind of been under the radar politically, but it’s passed our State Assembly four years in a row. And we’re just one state senator short of a majority in the Upper House. So we’re actually closer than we’ve ever been to winning universal health care in New York. And the New York Health Act would basically set up a single payer system which would eliminate financial barriers to health care. So there’d be no more copays. Everything would be covered. And most importantly, everyone would be in one system.

So you would have, it would be an equal, equal health care system. So you wouldn’t have different quality of care based on your wealth, which is really key for us.

BEN NORTON: Have you seen much resistance to this? Or do you think a lot of people support it? Because polls show, nationally at least, that a majority of Americans would support a single payer, Medicare for All-style system. I don’t know about New York State, but what kind of support have you seen?

URSULA ROZUM: Support has been steadily growing. The Campaign for New York Health formed in 2014. And you know, we started around endorsements from the labor unions. Then faith groups came onboard. Everyone uses healthcare at some point in their lives, and everyone knows someone who has struggled within the current system. So when we tell people that, you know, we have a plan to create a universal system in New York for health care for all, it’s kind of like candy. Like, people really are excited to hear about about the plan, about the New York Health Act.

And one of the techniques we’ve been using is we have, we have a testimonials project where we asked people to share their healthcare experiences, and we, we are hearing so many stories just of people skipping medications, skipping going to the doctor, going into debt because of health care costs. So this is an issue that impacts everyone. So I think that that’s why we’ve been seeing support steadily growing as people learn about the New York Health Act.

BEN NORTON: I mean, I’ll say, as a New Yorker myself, I’ve definitely gone years of my life, different periods between different jobs, where I didn’t have health insurance, and I certainly have been one of those many people. One of the interesting points about this that I think we hear a lot, especially from conservatives who oppose it, is they say how can you afford such a single payer program? But what’s interesting is studies show that actually, Medicare-style systems, single-payer systems, are in fact much cheaper and have much lower overhead than private, for-profit health care. Can you talk about that?

URSULA ROZUM: Yeah. We conducted a study in New York State in 2015 that showed by implementing a universal public healthcare system, or what we call single payer health care, New York state could save $45 billion. And also that, it would be really working class people that would see the biggest savings in their health care costs. Ninety eight percent of us would be paying less for health care than we do now. But the greatest savings would go to those that are making $75000 annually or less. So this was done by Gerald Friedman of UMass Amherst in 2015.

So when conservatives tell us, oh, it’s just, it’s unaffordable to set up universal health care, what we say is that the current system is what’s really unaffordable, and most people struggle to afford health care right now.

BEN NORTON: Yeah, and then let’s take a step back and talk about the move nationally to try to create a single payer-style system. The U.S. is totally unique in the world, in the industrialized world, when it comes to this issue. Every other large industrialized nation has a single payer-style system, or at least some kind of universal healthcare. Of course many countries in Western Europe this is totally the norm, and the idea that people wouldn’t have healthcare is actually strange. So can you just talk about the unique situation in the U.S. with private health insurance companies, and the move toward a single payer system?

URSULA ROZUM: Well, I think the pharmaceutical and the insurance industries, they’re, they’re universally loathed by people that use health care. And I think we are seeing, that’s why we’re seeing such growth and support for Medicare for All, because unlike issues, other issues, this is actually an issue that impacts everyone, because they, everyone uses the health care system at some point. What’s been really inspiring is to see the degree to which health care workers have been really driving this fight. Nurses across the country have really been heavily supporting the growth of Medicare for All movement. We see groups like Democratic Socialists of America making it their main campaign organizing issue nationally. And ultimately it’s, universal health care would be liberating just for working, for all working people, because we would no longer be reliant on the bosses to provide health care.

But I think here in New York we have an opportunity to create a model for the nation. And in Canada universal health care passed first in Saskatchewan, and spread to the rest of the country. So we’re hoping that New York can be the domino that, you know, sets off a wave across the country of single payer legislation passing.

BEN NORTON: And then, finally, I want to conclude here talking about Sen. Bernie Sanders, who during his presidential campaign in 2016 made this a key point. He tried to push for a universal Medicare for All-style system. And since then we’ve seen some other, not too many, but we’ve seen some more progressive figures, including some people in the Democratic Party who have endorsed a Medicare for All-style system. What do you think of this campaign, and do you think that we could potentially see success in the national stage? You said, you know, New York could be the first domino. But maybe even a president who would support Medicare for All.

URSULA ROZUM: Medicare for all, I mean, I think we see it, it’s going to be one of the biggest issues in the 2018 and the 2020 election. Because, I think it is because of the groundwork laid by the Sanders campaign, and because it is an issue that caught fire with with the American people because we, people experience it so viscerally and so personally. And so right now our strategy needs to be to engage our communities, to speak out about the way that this current system has been hurting people, because it’s really those-. You said the conservatives will argue that this is too expensive. But it’s really our personal stories that are the evidence, and they’re really what can help us put this current system on trial.

So I think the prospects are, are pretty, are pretty good, but that also the opposition also sees what’s coming. Because, you know, it’s, it’s so visible that people are clamoring for a different system.

BEN NORTON: We’ll see what happens, and then we’ll see what happens specifically here in New York, which, as you mentioned, could be the sign of a potential national movement. I was joined by Ursula Rozum. She’s an organizer with Physicians for a National Health Program. Thanks for joining us.

Should Politicians Respond to Systemic Issues As If They Are Our Parents?