On top of its legal obligations to asylum seekers, does the U.S. have a moral obligation to Central Americans fleeing countries that the U.S. has destabilized? We discuss the criminalization of immigration and asylum-seeking with The Nation's Juliane Hing and Amnesty International's Denise Bell

On top of its legal obligations to asylum seekers, does the U.S. have a moral obligation to Central Americans fleeing countries that the U.S. has destabilized? We discuss the criminalization of immigration and asylum-seeking with The Nation's Juliane Hing and Amnesty International's Denise Bell 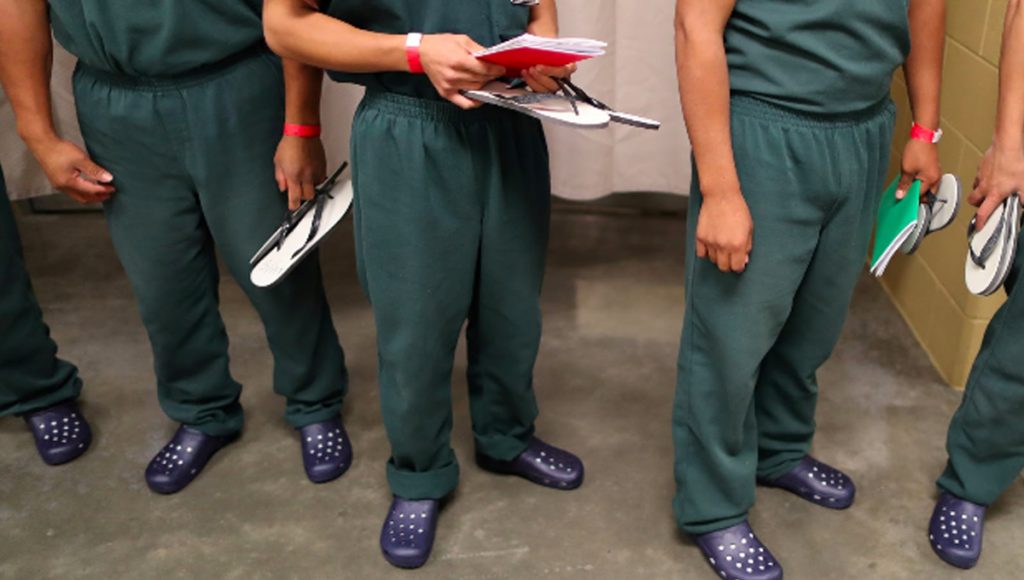 We’re talking about immigration. President Trump has signed an executive order that ends his family separation policy. In doing so, he’s trying to return to the status quo ante, a family incarceration policy. We’re talking about this with Juliane Hing, immigration correspondent for The Nation magazine, and Denise Bell, researcher for refugee and migrant rights at Amnesty International.

So I want to start by going to a clip of Brian Kilmeade. He is a Fox News host. And this is him speaking about the children who were detained.

BRIAN KILMEADE: We just can’t let everybody in that wants to be here. This is, these are not, like it or not, these aren’t our kids. Show them compassion. But it’s not like he’s doing this to the people in Idaho or, or, or Texas. These are people from another country. And now people are saying that they’re more important than people in our country, who are paying taxes, who have needs as well.

AARON MATE: That was Brian Kilmeade of Fox News. So Juliane Hing, you know, there was so many clips that we have chosen to illustrate the level of discourse that’s been coming from circles like Fox News in recent weeks about immigration. But I’m just wondering your thoughts on what we’ve heard from right-wing pundits and politicians when it comes to immigrants during this crisis that has just erupted over these recent weeks.

JULIANE HING: Yeah, I do think that this crisis has laid bare the utter heartlessness with which so many politicians and pundits consider this topic of immigration. But but more than immigration, just basic human rights. You know, the thing that has has been so misguided, actually, about the Trump administration’s approach is Jeff Sessions, the attorney general, has, well, lately been walking back from this, but had repeatedly said that they were pursuing this zero tolerance policy, which is to say a prosecute everyone policy, as as a way to deter people from trying to cross into the United States. But multiple studies have shown that there’s actually very little correlation between border enforcement, between the militarization of the border, and flows of people coming.

The fact is that many of the people who are coming from Central America, and three major countries in particular, El Salvador, Honduras, and Guatemala, are fleeing for their lives. And, and so, you know, people are coming to the border, following what is actually their right under U.S. law to present themselves and and ask to, to be given an opportunity to apply for asylum, are being treated as if they are garbage. This idea that these children are other people’s children-. No, actually, they’re all of our children. These are these are just very, very, very young children. And it doesn’t matter their nationality. The fact is that they’re here, and there are basic rights that our country affords them. And all of that is being looked, is being washed away.

AARON MATE: But Juliane, let me ask you, the counterargument that we heard from the Trump administration and right-wing pundits is that these immigrants, asylum seekers, are not presenting themselves at authorized ports of entry, they’re trying to cross illegally.

JULIANE HING: Well, actually, so people who are waiting to present themselves at official ports of entry have also been denied entry to the United States. There was a large caravan of people who were traveling from Central America through Mexico to present themselves at the border at an official port of entry to plead for asylum, and many of them were turned away or told to wait. And so, you know, even people who are following exactly exactly the letter of the law, which is come to an official port of entry, are being mistreated and are being told that there is there’s no room for them here.

But, but part of the reason why border patrol facilities and border detention centers are so full up, leave to the side for a second, the fact of why, you know, the government is locking people up anyway. The reason why these detention centers are so full is because the United States under the zero tolerance policy has decided to criminally prosecute even people who are crossing to the border for the first time. And that is a misdemeanor offense. You know, there’s this concept of prosecutorial discretion. A cop can see you jaywalking across the street and decide not to ticket you in the same way that the United States can choose what they want to put their limited resources towards. And right now the Trump administration is saying that they want to put the full force of the law into prosecuting people who have, all they’ve ever done, you know, many of these people have never been to the United States and have no other history here, is to slap them with a criminal prosecution.

AARON MATE: Right. So, which speaks to the criminalization of immigration. Those trying to come here have been penalized for it. Denise Bell, if you could pick up on that, when did this practice, this attitude of criminalizing people who have tried to enter before, really escalate?

DENISE BELL: Well, we do know that, as you know, under the Obama administration that was the policy for what was called the surge in 2014, of families and unaccompanied children who came to the border and asked for asylum. And that was a deterrence-based policy seeking to punish people for coming here. And the courts really pushed back and Obama walked that back. So did not stop the policy of family detention. This has always been a trend, but it’s really been the focus here under this administration to undermine the right to seek asylum, but also the right to seek asylum under U.S. law, it’s not just international law, by criminalizing it. By punishing people, whether they come to a port of entry or they cross between a port of entry. They are doing nothing wrong. They are asking for asylum, which the U.S. law says very clearly does not have to be done at a port of entry.

So this is part of a whole, what you would say, the closing of the borders. Whether it’s slowing down refugee admissions, whether it is undermining the asylum system, what we see is a concerted effort to attack these systems of protection.

AARON MATE: In terms of international law, Denise, let me ask you, finally. Juliane before mentioned the three countries that have been the primary source for this surge of people trying to escape persecution, repression, violence. And they are El Salvador, Honduras, Guatemala. Anybody who knows 20th century and recent history knows that these countries have been major targets of U.S. destabilization efforts. Backing right-wing governments, right-wing death squads. Amnesty has certainly documented many of the atrocities there. I’m wondering if amnesty has a position on whether or not there is a legal or moral obligation on the part of the U.S. to welcome people who are fleeing countries that it has destabilized. I mean, Honduras even was just, there was a coup there in 2009 that the U.S. administration under Obama supported.

DENISE BELL: Well, that’s an excellent question. What I can say is that the U.S. has a moral obligation, as any country does, to offer asylum and protection and make sure that people are not harmed. And also we do have a responsibility for many of the humanitarian crises in the world, and in which we might have contributed. Yemen, for example. Some of our policies have contributed to the suffering there.

In terms of Central America. Amnesty has documented what the U.S. has done there, but also how the countries, the governments in those countries, are creating such conditions of persecution and security people have no choice to flee. So it’s the responsibility of those countries and that is the responsibility of the U.S. and of Mexico to offer safe passage to people who are fleeing for asylum.

AARON MATE: We’ll leave it there. My guests have been Juliane Hing, immigration correspondent for The Nation magazine, and Denise Bell researcher for refugee and migrant rights at Amnesty International. Thanks to you both.