US and Brazil Propose to Fight Amazon Deforestation with Development

The US and Brazil found common ground for combating the deforestation of the Amazon rainforest, proposing that economic development is the cure. However, Amazon Watch's Christian Poirier says that the kind of development they propose will have the opposite effect.

The US and Brazil found common ground for combating the deforestation of the Amazon rainforest, proposing that economic development is the cure. However, Amazon Watch's Christian Poirier says that the kind of development they propose will have the opposite effect. 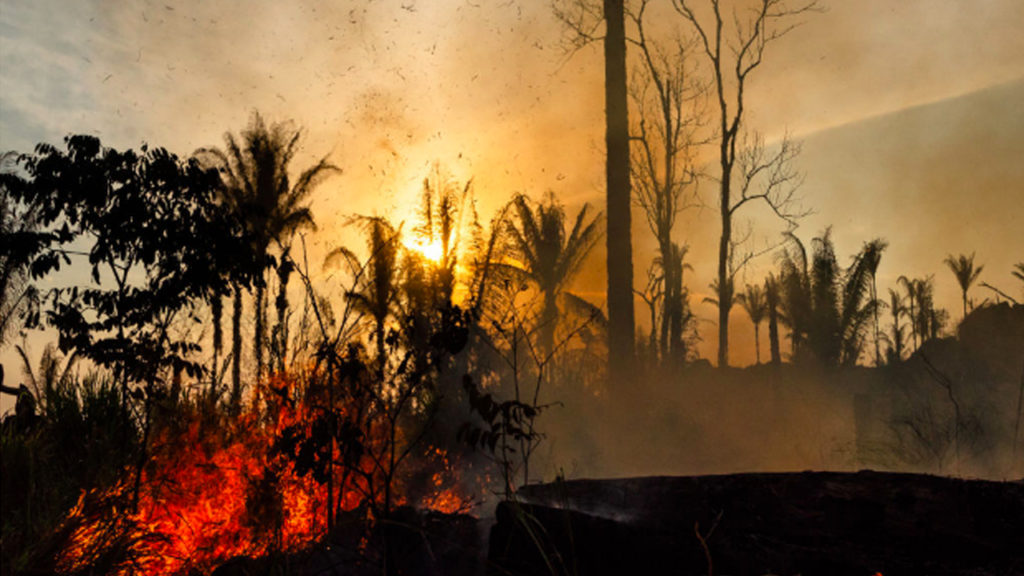 DIMITRI LASCARIS: This is Dmitri Lascaris reporting for The Real News Network from Montreal, Canada.

The United States and Brazil governments reached an agreement to promote private sector development in the Amazon. The agreement was reached during a meeting in Washington, DC last Friday. US Secretary Of State Mike Pompeo and Brazil’s Foreign Minister Ernesto Araujo both argued that such development would actually help protect the Amazon. Here’s what Foreign Minister Araujo had to say after last Friday’s meeting.

ERNESTO ARAUJO: We want to be together in the effort to create developments for the Amazon region, which we are convinced that is the only way to really protect the forest. So we need new initiatives, new productive initiatives that create jobs, that create revenue for people in the Amazon and that’s where our partnership of the United States will be very important for us.

DIMITRI LASCARIS: The portion of the Amazon Rainforest that is in the country of Brazil has been subjected to over 80,000 fires this year alone, which represents nearly a doubling of the number of fires compared to 2018. Environmentalists blame the government of far-right President Jair Bolsonaro for most of this increase because he has encouraged developers to take over rainforest land.

Joining me now to discuss these alarming and related developments in the Amazon Rainforest is Christian Poirier. He has coordinated Amazon Watch’s Brazil program since 2009. He joins us today from Oakland, California. Thank you for coming back on to The Real News, Christian.

CHRISTIAN POIRIER:      Thanks for having me.

DIMITRI LASCARIS: So Christian, let’s get your reaction first of all to this claim made by Mr. Araujo and Mr. Pompeo, that development is needed to protect the Amazon Rainforest. How do you respond to that?

CHRISTIAN POIRIER: Well, it really—We need to look at development for who and for what. It’s not untrue to say that the people of the Amazon, of which there’s 25 million people living in the Brazilian Amazon, they need real sustainable economies and real jobs with dignity to develop their communities, to feed their families. And in order to have this, we need to see the kind of economies that keep the forest standing— unlike precisely what Jair Bolsonaro and his regime are proposing.

It’s also important to recognize that Ernesto Araujo is a rabid a climate denier. He calls climate change a Marxist theory or conspiracy, so anything coming out of that man’s mouth should not be taken with any real credibility. He speaks for a regime that is also totally noncredible when it comes to talking about protecting the Amazon because it is driving the wholesale destruction of the Amazon. It is wholly responsible for what is taking place today in the Amazon.

DIMITRI LASCARIS: Part of the rationale for promoting this so-called development, it would seem, is that it would help provide a $100 million fund for biodiversity conservation. If that were to happen, I imagine that you, Amazon Watch, would be of the view that that’s a good thing. How do you respond to that particular argument in favor of this so-called development?

CHRISTIAN POIRIER: Well this accord is extremely short on details. It talks about developing sustainable value chains and it talks about spurring growth in the Amazon, but when we look at the coordination of two regimes that are entirely anti-environmental, denying climate science, we cannot expect that so-called biodiversity conservation will be a priority of so-called development.

What we have seen is Bolsonaro calling on the US government and US investors to spur investment in the most destructive industries in Brazil— from agribusiness to mining in the Brazilian Amazon. Therefore, the real messaging we’re seeing, besides this greenwashed declaration that was made last week, is extremely troubling and is not pointing towards the truly sustainable and responsible and ethical development that the Amazon really needs to keep standing and to respect its forest peoples, including its Indigenous peoples who want development. They just don’t want the development that we’re seeing today.

DIMITRI LASCARIS: And finally, Christian, Human Rights Watch just published a report titled “Rainforest Mafias,” in which the Amazon’s deforestation is said to be largely driven by criminal gangs that attack government officials, environmentalists and Indigenous peoples who try to stop the destruction of the rainforest. According to Human Rights Watch, 28 people have been killed in relation to deforestation over the past four years. What is your sense of the Bolsonaro government’s degree of culpability for this? And do you think that that report is telling us the full story of Bolsonaro’s culpability?

CHRISTIAN POIRIER: Yes. I think what Human Rights Watch did with their report was demonstrate the brutality of Brazil’s logging sector. And it’s important to recognize the fires today are set in areas that have been illegally logged previously, so they were illegally logged and the fires were set there. Illegal deforestation in Brazil goes hand in hand with the rampant fires we’re seeing today. And members of Brazil’s federal police say that 90% of timber coming out of Brazil today should be considered illegal.

So this is an extremely brutal and destructive industry and it’s being facilitated by the policies of Jair Bolsonaro, which has opened the floodgates to human rights abuses and environmental destruction in the Amazon and really given birth to the kind of impunity that we’re seeing flourish in the Amazon today. It’s not a new phenomenon, but it’s become extremely aggravated under Jair Bolsonaro and the logging industry.

You could say that, okay, poverty drives the degradation of the Amazon, as Brazil’s so-called environmental minister Ricardo Sallas has said, but the people that are actually doing the deforestation today are working in slave-like conditions. This is not the kind of dignified work that we need to see the people of the Amazon employed doing in order to feed their families and to develop their communities. It’s precisely the backwards and predatory capitalist model that we expect that Bolsonaro and the US government under President Trump would like to impose on the people of the Amazon, rather than create a dialogue and really create the development that people on the ground need.

DIMITRI LASCARIS: Well, I’ve been speaking to Christian Poirier, Coordinator of Amazon Watch’s Brazil program about a new plan by the Brazilian and American governments to accelerate so-called development in the Amazon Rainforest. Thank you very much for joining us today, Christian.

CHRISTIAN POIRIER: Thanks again for having me.

DIMITRI LASCARIS: And this is Dmitri Lascaris reporting for The Real News Network.

Christian Poirier is a senior member of Amazon Watch’s team. Having coordinated the Brazil Program since 2009, Christian also led the organization’s efforts to encourage a shift toward non-hydro energy alternatives in Brazil’s electricity matrix. While managing Amazon Watch’s Paris office, he partnered with European NGOs on Corporate Social Responsibility campaigns. He has over sixteen…

Changing the Narrative on Climate Change

Ten-Year-Olds Sound Off on Climate Inaction