The Philippines ended the Visiting Forces Agreement, which allows the US military to operate within the Philippines and grants access to the South China Sea. Is President Duterte doing the right thing for the wrong reasons?

The Philippines ended the Visiting Forces Agreement, which allows the US military to operate within the Philippines and grants access to the South China Sea. Is President Duterte doing the right thing for the wrong reasons? 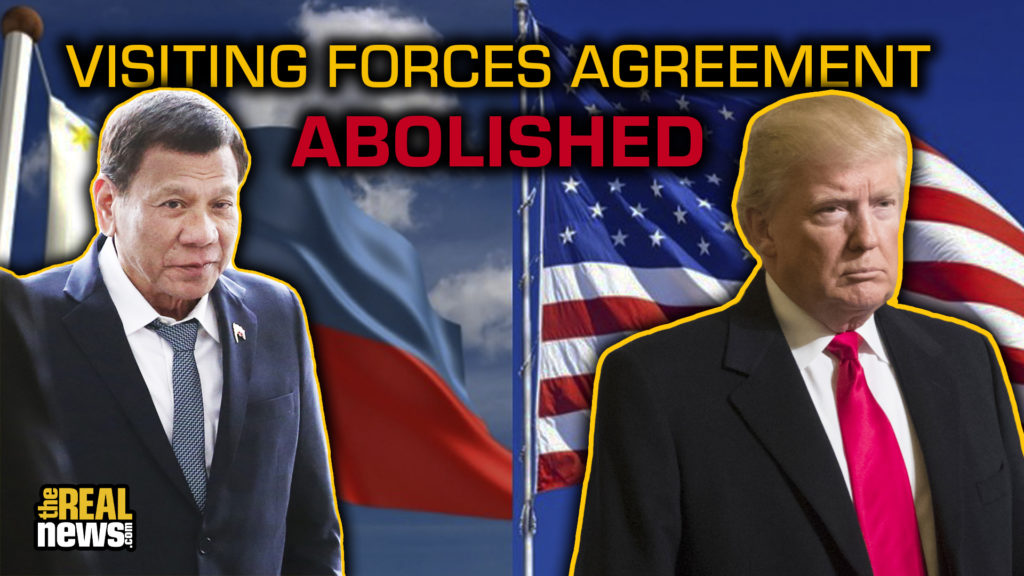 The bilateral relationship between the two countries has been deteriorating, partly because US Senate passed an amendment to a budget bill last December, which denied entry to Philippine Senator Ronald dela Rosa because of his role in the drug war in the Philippines. That drug war has claimed the lives of thousands, some even say tens of thousands of Filipinos. The US Senate also protested the imprisonment of Senator Leila de Lima, a staunch critic of President Duterte. On Tuesday, President Duterte explained his reasons for canceling the VFA.

GREG WILPERT: Joining me now to analyze the heightened tensions between the US and the Philippines as Walden Bello, is a former three term Congressman of the Philippine legislature where he coauthored resolutions for terminating the Philippine Visiting Forces Agreement with the United States a few years ago. Currently he’s professor of sociology at the State University of New York at Binghamton, and the author of the books Counterrevolution: The Global Rise of the Far Right and of Paper Dragons: China and the Next Crash. Thanks for joining us again, Walden.

WALDEN BELLO: Thanks for inviting me.

WALDEN BELLO: Well, the situation here is that, yes, Duterte has been a moving closer to China, and he has in fact had a strong anti-US rhetoric and this has become of course, heightened by this refusal of the United States to give a visa to a Senator dela Rosa. So basically, what we see here is I think Duterte has been smarting for some time at what he sees has been the United States’ sort of mistreatment of him personally, which started with President Obama back in 2016, criticizing him for the killings in the drug war. It’s just deteriorated since then. So with this element that has the refusal to grant a visa, this has just blown the lid off his relations with the United States.

GREG WILPERT: Yeah, I find that interesting. I mean, a few months ago I interviewed you about your book, The Global Rise of the Right, in which we discussed the ethnocentric and nationalist nature of the far right in the Philippines. Something that we did not really delve into is the international alliances of the far right and the commonalities internationally speaking.

For example, I mean Trump and Duterte to seem to actually admire each other. When Trump visited the Philippines or when they saw each other, I mean, the last time, Duterte even had like some kind of a love song for Trump. But this admiration actually seems to stand in stark contradiction with each one’s desire to play the national sentiments in their respective countries. So how do you see this contradiction playing out in the Philippines? I mean, and how does this relate to Duterte’s war on drugs?

But on this case, in the case of ending the Visiting Forces Agreement, and I hope he also ends the other treaties with the United States like the Enhanced Defense Cooperation Agreement, which gives the United States bases in the Philippines and the Mutual Defense Treaty. So I think this is something that’s positive and we may not like the person who’s doing it, but the important thing is the act of doing it.

GREG WILPERT: Well, that’s something I was actually going to ask you next about, I mean, that on the one hand it seems like a bit of a dilemma that the one hand, as you mentioned, Duterte’s human rights record is atrocious and he’s responsible for these tens of thousands of extra judicial killings in the drug war and needs to be held accountable for that.

But on the other hand, he’s canceling the VFA on the basis of the criticism he has received from the United States of the human rights violations. So I’m just wondering: Even though that seems like a contradiction that is he’s in the end doing something that, as you said, should have happened a long time ago, but he’s probably doing it for the wrong reasons. Is that more or less the sense that you have?

WALDEN BELLO: Yes, sure. I mean, history plays tricks on us. It would have been great if it were a progressive who ended the whole thing. But it’s Duterte, and as I said, it may be the devil incarnate, but on this particular issue, I support him. You see, the problem right here right now is that it’s not just a violation of Philippine sovereignty, which these treaties represent. But the US presence here, the US basis that are nominal Philippine bases, the military exercises had been a way that the United States has lassoed the Philippines into a military alliance against China. Because the key thrust of the US policy right now in the Asia Pacific from Bush to Obama to Trump, has been in fact to preserve the US hegemonic edge in the area against China’s rise.

The Philippines has been central to the US strategy of the so-called air, sea battle, which is directed at how the United States can penetrate the anti-missile and defenses of China. So we have this situation whereby through irresponsibility, previous governments have allowed the Philippines to be dragged into this dangerous military alliance and from which we don’t benefit. In fact, we’re exposed in this battle between two Goliaths. So this is a bigger issue. This bigger issue is really that the United States is engaged in a very destabilizing, aggressive strategy here, and right now we’re cutting loose from that.

GREG WILPERT: Very interesting development. We’re going to have to leave it there for now, but I’m sure we’re going to continue to follow this. I was speaking to Walden Bello, a professor of sociology at the State University of New York at Binghamton. Thanks again Walden for having joined us today.

WALDEN BELLO: Thanks too for inviting me.