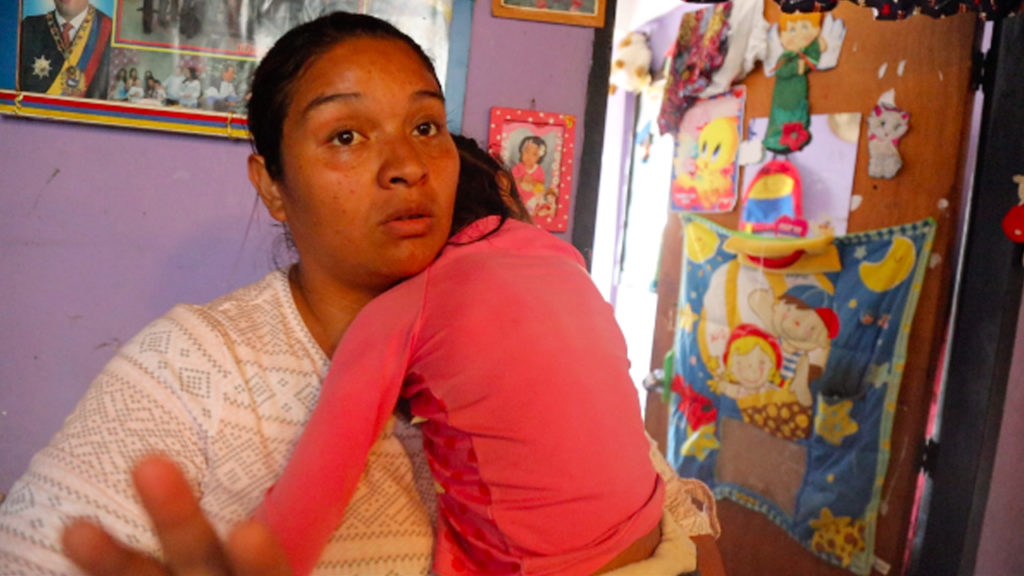 MIKE FOX: Carolina Subero is the mother of three, from a poor barrio in Eastern Caracas. Her youngest Jenjerlys is a beautiful little 5-year-old girl. But she’s also autistic and epileptic, which means she needs medicine. Medicine she can’t get.

CAROLINA SUBERO: She has seizures every day. Last night she had three. The medicine helps to make them not as bad. When we can’t get her medicine, they send her to the hospital.

MIKE FOX: Carolina says that her little girl used to take four different medicines for her seizures. But now because of the U.S. sanctions, which are blocking the import of essential medicine, Carolina can only get one of the drugs. And that only some of the time, because it’s too expensive. A box of pills that will last 10 days, can cost her one month’s minimum wage, or three bags of arepa corn flour.

CAROLINA SUBERO: I’ve had to trade food for the medicine. They sell it in a box of 20 pills and it’s really expensive, because it comes from another country and they want to hurt us.

MIKE FOX: When she can’t get the medicine, Jenjerlys’s seizures can get bad.

CAROLINA SUBERO: I’ve had to take her to the hospital and she’s been in intensive therapy. Once she had 20 seizures, one after the next, and they sent her to intensive care.

MIKE FOX: Carolina’s husband sends money from Colombia, where he went to find work. But it’s not enough. She lives in this two-room house with her mother, her two sisters, and her three girls. 5 people sleep in this room.

Carolina is not a Maduro fan. But she doesn’t blame the government. The problem, she says, are the U.S. sanctions.

CAROLINA SUBERO: They don’t care. They think they are hurting president Maduro, and they’re really hurting the people. If they really wanted something good for Venezuela, they would not be doing what they are doing right now.

MIKE FOX: The United States imposed some of the first economic sanctions on Venezuela in 2014. The next year Obama decreed the country a threat to national security. International banks began to delay or freeze transactions, out of fear of U.S. reprisals. Under Trump the sanctions intensified. This year the United States confiscated the country’s U.S.-based subsidiary Citgo. It’s also blocking Venezuela from exporting the country’s oil, the source of 95% of the nation’s GDP.

According to Venezuela, the U.S. government has frozen $5.5 Billion U.S. dollars of Venezuelan funds in international accounts in at least 50 banks and financial institutions. This has drastically hindered the government’s ability to purchase medicine for cancer and HIV patients, for whom the state has long provided treatment free of charge.

According to a recent report by Washington-based the Center for Economic and Policy Research, as many as 40,000 people have probably died in Venezuela because of the U.S. sanctions and more than 300,000 people are estimated to be at risk because of lack of access to medicines or treatment. This includes 16,000 people who need dialysis, 16,000 cancer patients and roughly 80,000 people with HIV.

Marcel Quintana is the co-founder of the LGBT aids awareness group ASES Venezuela. He is also the Venezuelan who has lived the longest in the country with HIV — 33 years. He is now in charge of the distribution of anti-viral meds to the country’s HIV patients, something Venezuela has provided free of charge for decades. But now it’s next to impossible to acquire the medicine, which is all imported.

MIKE FOX: Quintana says that they have meds to cover the country’s HIV population for now. But if the sanctions continue, they are going to run out of options.

MIKE FOX: The blockade is costing people their lives. In May, four children died in a hospital in Caracas, while waiting for life-saving bone marrow transplants through an Italian hospital, as part of an international program that has been in effect since the 1990s. The payment, transferred from Venezuela’s state oil company PDVSA has been blocked by the Portuguese bank Novo Banco. Dozens more, both children and adults are still awaiting the treatment in Italy.

LEOMAR GONZALEZ: Help us. We need help to fix this, because we depend on the funds from PDVSA.

MIKE FOX: Back in the poor barrios of eastern Caracas, Carolina has a special message for U.S. president Donald Trump.

CAROLINA SUBERO: I would like to tell the president of the United States to please have a heart. Because just like my case, there are many more children in even worse situations and it’s been very hard to get medicine for our children.