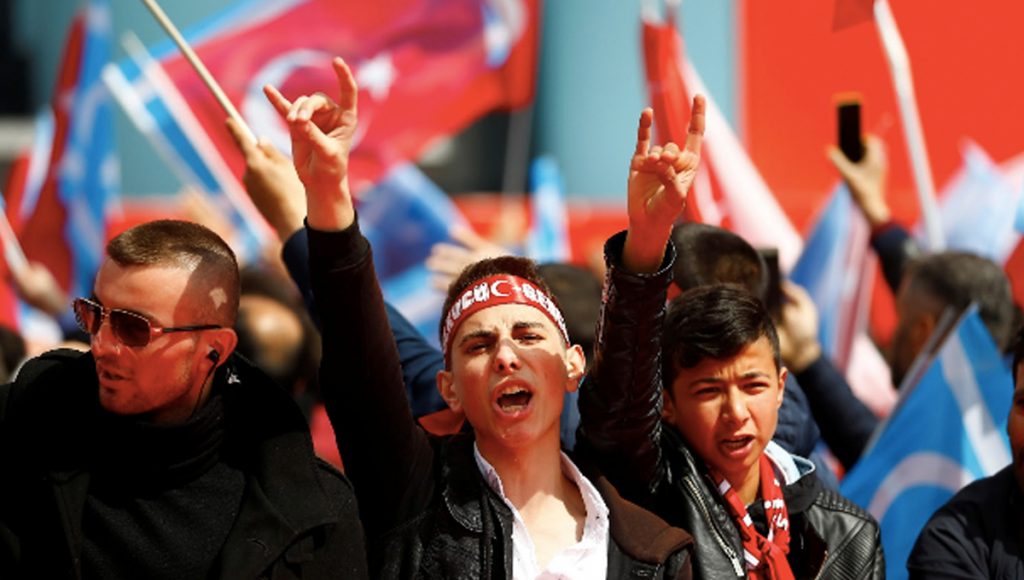 Turkey is holding a closely-watched snap election on June 24, while domestically the country is going through a currency crisis that could soon balloon into a full-on economic crisis. To further solidify power, Turkey’s increasingly authoritarian President Russia Tayyip Erdogan of the right-wing Justice and Development Party, known as the acronym AKP, has made an alliance with the far-right extremist National Movement Party, which is known as the MHP. This right-wing coalition is called the People’s Alliance, and it is vehemently anti-Kurd, hypernationalist, and Islamist in orientation.

Joining us to discuss the upcoming elections in Turkey and this right-wing alliance is Baris Karaagac. He’s a lecturer in international development studies at Trent University in Ontario. He is also the editor of the book “Accumulations, Crises, and Struggles.” Thanks for joining us, Baris.

BARIS KARAAGAC: Thanks for having me, Ben.

BEN NORTON: Of course. So can you talk more about the upcoming snap election? This Is on June 24. It’s coming pretty soon. And specifically, the right-wing People’s Alliance that President Erdogan has formed with the far-right MHP.

BARIS KARAAGAC: Well, there will be an election for two things. So Turks will be voting for parliament, as well as for president this Sunday. So this election came after the constitutional referendum in 2017, when basically the AKP and President Erdogan changed the political system in the country. So now Turkey, the system changed from being a parliamentary one to a presidential one. So Turks will be voting both for a president and members of parliament.

And this is one of the most important, most critical elections since the AKP came to power in 2002. For the first time what we’ve observed is that Erdogan is really, really worried about losing power. And it entered into that coalition, which actually became legal with the most recent legal changes, constitutional changes, into a coalition with the far-right or neofascist, according to me, a neofascist party called the MHP, which has been on the political scene in Turkey since 1969. And this is quite concerning, because this is in a way considered consolidation of a significant part of the far right in Turkey, which agrees on, or which is based on, whose platform is based on, anti-Kurdish stance, different versions of conservative Islam, and the chauvinistic nationalism.

BEN NORTON: Yeah, and then let’s talk more about the economic situation at home. So Erdogan is trying to create, unite these, as you mentioned, far-right nationalist forces. At the same time Turkey’s been going through a currency crisis. And some experts have warned that this currency crisis could soon expand into an economic crisis. Can you talk about that role in the upcoming election?

BARIS KARAAGAC: Well, actually, we should go back in time to be able to better understand what is going on in Turkish economy right now. And I think a critical date is 2006-2007, since when Turkey has been running significant current account deficits. And since then Turkey has found a way to attract short-term capital to be able to finance those current account deficits. And also the state has played a very, very important role in this process. However, the basis of Turkish economy, and particularly industry, has been quite weak. So Turkey has been dependent on significant inflows of short-term foreign capital for more than 10 years. The only sector that has boomed in this process has been construction. But even construction, in the construction sector you can see a significant crisis in the past couple of years, which has culminated which has become much worse this past year.

So since the beginning of last month, we also observed that the Turkish Turkish lira has lost significant value vis-a-vis the major currencies in the world, particularly the euro and the U.S. dollar. And of course this has concerned the AKP government and the Turkish President Erdogan, which are facing a critical election this weekend. In order to postpone this some of the ministers, or one of them that they actually, the minister who is in charge of Turkish economy met with some of the members of the, or leading members of global finance, to be able to borrow money in the short term. But of course this is, this is just dealing with the symptoms for a very short period. The goal is to postpone the more devastating consequences of the current situation in Turkish economy. And many experts, many economists have argued that the consequences will be nothing less than catastrophic.

Recently [inaudible] who teaches and works in the U.S., one of the leading economists in the world, he, he basically said, well, there’s no easy way out of this crisis. Companies will go bankrupt. The economy will be in a very, very difficult situation very soon, because this has been going on for a long time. But the consequences have been just postponed by the AKP government to avoid any loss of power during the process.

BEN NORTON: Yeah, and the AKP, this is Erdoğan’s ruling right-wing party, has pursued a neoliberal economic agenda for many years now. And what’s interesting is how they’ve combined this neoliberal capitalist economics with this right-wing nationalism. And specifically how they are targeting minority populations, particularly the Kurds, inside Turkey. We’ve seen a violent military campaign against Kurdish activists in the south of the country in which, you know, large sections of cities are destroyed. You know, there’s massive rubble from these Turkish army attacks. And then of course, as we discussed earlier, Erdogan has made coalitions with some of these fascist groups. I mean, we mentioned the MHP. The MHP is notorious for having its youth paramilitary paramilitary wing, which are called the Grey Wolves. And the Grey Wolves have carried out attacks against Kurds inside Turkey. So can you talk about the confluence between this neoliberal economics and this far-right, anti-Kurdish nationalism?

BARIS KARAAGAC: Well, it seems these two parties made an alliance based on a very chauvinistic form of nationalism. Because in this conjuncture Erdogan sees the Kurdish movement, and its political party the HDP, as its most critical of opponents. That is the decisive force in terms of whether or not the AKP will remain, the AKP and Erdogan will remain in power, both in parliament and presidency.

The leader of the HDP has been in prison for more than one year, and there, there’s no basis for that. There’s no, absolutely no legal basis as to why this person, Demirtas, has been in prison in [inaudible] neighbours Greece in Turkey. So the reason is that Erdogan is really, really afraid, he is really afraid that the HDP will again pass the 10 percent threshold, and will destroy an AKP and MHP majority in parliament. So he’s really scared of Demirtas. And this is what Demirtas actually emphasized in his talk from prison yesterday.

BEN NORTON: Yeah, let’s talk more about that. You mentioned the HDP. This is the left-wing People’s Democratic Party. This is known for being a pro-Kurdish, anti-racist party, also feminist, and has a co-chair who’s both a man and a woman. And as you acknowledged. Selahattin Demirtas, who is the male cochair of the HDP, has been imprisoned, along with other party leaders. They were in prison in 2016 when Erdogan, he purged his political opponents, he purged thousands of people from the government. All, anyone who could challenge his hold on power. The HDP is also, it was democratically elected. It had, as you mentioned, more than 10 percent needed to enter parliament. And it’s the third-largest party in parliament. Yet Erdogan, who claims to be the leader of a democracy, has imprisoned the leaders of this democratically-elected party. And then you also mentioned that Demirtas just gave a speech from prison. He’s still running for president from inside prison. Can you talk about what this signifies for the state of democracy in this NATO member, Turkey, where it’s imprisoning members of the opposition?

BARIS KARAAGAC: Well, first of all, especially for our American audience, I would like to emphasize one important point. Despite the tension in the past few years between the U.S. and Turkey, Turkey still is an important U.S. ally in the Middle East. That’s an important point. The U.S. continues to support Turkey in a number of foreign policy objectives. Turkey, the U.S. still cooperates with Turkey militarily, economically, et cetera. So this is an important point to emphasize. Secondly Turkey, has become a, almost a jail for opponents of Erdogan. Turkey is a world leader in terms of the number of journalists in jail, academics in jail. And Turkey has been jailing, persecuting not only academics, not only journalists, but even high school students. So high school students cannot escape from persecution if they’re there to criticize Erdogan, or the AKP in any form.

So there’s significant concern both within Turkey and on the international, and at the international level, that Turkey is becoming more and more authoritarian day by day. And this process has been led and cultivated and engineered by particularly Erdogan, who is running for president again this week. Another important point is that this authoritarianism has particularly hit people on the left and Kurds. And this is because, as you said, what Erdogan and the people around them within the AKP has implemented in the past 15 years is a very specific form of neoliberalism based on cronyism. But it’s neoliberalism. And many of the of the people who were following The Real News Network would know that since 2016, Turkey is under a state of emergency. Even the state of emergency has made many neoliberal reforms possible. And where when he faced some criticism, particularly with regard to [inaudible] et cetera from certain parts of Turkish capital, he responded by saying, why do you guys complain? No one can go on strike in state of emergency. This is the best moment for you to do business. So he basically told them to shut up. Right?

So it’s, it’s a very difficult situation for people on the left in Turkey, but particularly for Kurdish leftists in the country. Sorry for interrupting, but one important issue when it comes to Selahattin Demirtas, and I would like to extend my solidarity to Mr. Demirtas, here, he is leading a party that is known as a pro-Kurdish. But Demirtas has wanted to create a party for Turkey that embraces different segments of the population, and that it agrees or that has a consensus over a number of issues, a number of policies, a number of principles that the left has held dear for more than a hundred years. So it’s very important that Demirtas is not only the leader of Kurds in Turkey, but he’s also embraced as a leader by many Turkish leftists, and rightfully so.

BEN NORTON: Well, we’ll actually continue our discussion here. We’re joined by Baris Karaagac. He’s a lecturer in international development studies at Trent University in Ontario. In this segment we were talking about the upcoming snap election in Turkey on June 24, and Erdogan’s violent crackdown on all of his political opponents, and specifically, as Baris mentioned, Kurds and leftists. In the second part we’re going to continue our discussion and talk about Erdogan’s increasingly militaristic foreign policy and military intervention in Iraq and Syria. Thanks for joining us, Baris.

BARIS KARAAGAC: Thanks for having me, Ben.