Over 50,000 Hondurans, plus their over 50,000 US-born children will face a very difficult choice of returning to one of Latin America's most violent and poorest countries or becoming undocumented immigrants in the US, says Amnesty International's Marselha Gonçalves Margerin

Over 50,000 Hondurans, plus their over 50,000 US-born children will face a very difficult choice of returning to one of Latin America's most violent and poorest countries or becoming undocumented immigrants in the US, says Amnesty International's Marselha Gonçalves Margerin 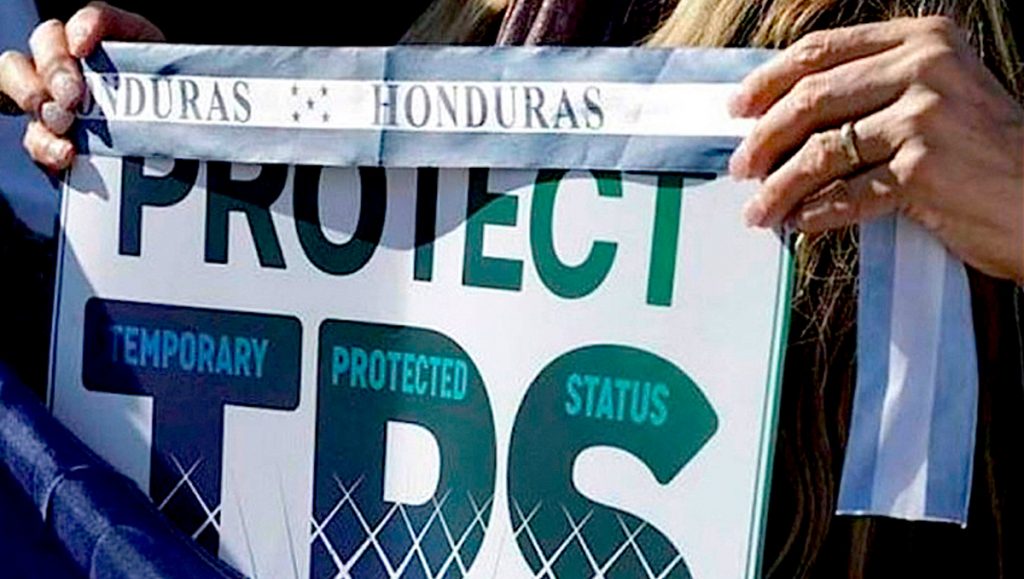 Last Friday, the Department of Homeland Security announced a temporary protected status, also known as TPS, of about 57000 Hondurans will be canceled. Hondurans now have until January 2020 to leave the United States. They were first granted TPS back in 1999 following the massive destruction that Hurricane Mitch caused in Honduras in 1998. This means that most Hondurans under TPS have been in the U.S. for 20 years now, and they have an estimated 53000 U.S.-born U.S. citizens children. With the cancellation of Honduras’s TPS, so far the Trump administration has canceled TPS for over 400000 refugees from El Salvador, Nicaragua, Haiti, Nepal, and Sudan.

Joining me to discuss the implications of this latest immigration decision on the part of the Trump administration is Marselha Goncalves Margerin. She the Advocacy Director for the Americas at Amnesty International USA. Thanks for joining us again, Marselha.

GREG WILPERT: So the Trump administration says the TPS for Honduras is no longer justified because the devastation that Hurricane Mitch caused in 1998 has now been overcome. What’s your reaction to this argument? What is the situation in Honduras now, and what would Hondurans face if they return to their former home country?

MARSELHA GONCALVES MARGERIN: So let’s, just a clarification. Not everybody who has TPS automatically are asylum seekers, are refugees. They would have to have one year to be able to file asylum if they want to. Whereas maybe most of the hurricane conditions might have superseded the conditions on the ground currently, in Honduras it is very difficult and would mean that a lot of people coming back, especially if they recognize that returnees from the United States, they could be a target for extortion, threats, kidnapping, and even deaths.

What happens in Honduras, similarly to Haiti and El Salvador, is the United States decision is not really based on current facts on the ground. The conditions changed, and certain groups are changed, and certain groups are very vulnerable to the current situation on the ground in Honduras. So we knew this was coming, but this decision is not based on real facts. People can be in real danger if they are sent back.

GREG WILPERT: I understand also that Honduras is one of the, has the greatest rates of inequality and violence. And not only that, we also had an election that has been hotly contested where lots of people claimed fraud. What kind of an impact will all of that have on them returning there?

MARSELHA GONCALVES MARGERIN: So what does it mean to be one of the most violent countries in the world is that you have homicide indexes higher at, sometimes at war zones, and that the justice system is not there protecting people. So it’s different then we say, well, we have violence in Baltimore and in other, in Chicago and other cities in the United States. But even though the justice system here is flawed, it’s not perfect, we know that there are serious problems, it still delivers some justice. When we are talking about high levels of violence, it’s that most of that violence and any crime against persons, most of it are left unresolved. So a woman that is raped, there are very few recourses for her case.

In countries like El Salvador, for instance, they can be put in jail for a miscarriage. The situation for Honduras, El Salvador, and Guatemala is one of the most dangerous places for, for women and femicide crimes. And people of LGBT identity, they are also, the index of, the number of assassinations and threats to people who identify themselves as trans or LGBTQ, they have serious threats.

So when we talk about every person individually, they have their right to request asylum, and a judge have to analyze that case individually. So for people in the United States there that are removed from that protective status, there are people trying to leave the country because of this threat. And as I mentioned before, just by the fact of being recognized as returnees of the United States, they can have a higher level of threats against them given the situation on the ground.

Certainly the political instability in the country since December just makes things real hard, as people who have, Amnesty International have documented that more than 30 people have been killed during protests in December. We have received reports of arbitrary detention, and we have documented that people who protest the right of environment and land, they have been killed and threatened. And there is, so depending on the group of individuals you are at a higher threat if you are returned. Not mentioning that there are more than 50000 of U.S. children born here. What you’re gonna do, you are separating and disrupting entire families. It’s really important that everybody that had TPS status have the opportunity to file for asylum and have that case analyzed, as well.

GREG WILPERT: So yes, you mentioned that this is affecting, of course, over 50000 children who are born to Hondurans, so all together the, the ones who are on TPS status plus their children is over 100000 people, at least. And so as a result, many of the Hondurans, according to most reports, say that they prefer to face undocumented status in the U.S. than returning to Honduras. What would you say does this mean for them, for those who decide to remain past January 2020?

MARSELHA GONCALVES MARGERIN: Well, this administration is putting people who have been legally here contributing to society, and U.S. children, in serious dangers and making them go underground. People have established families here. And instead of moving hundreds of thousands, because we are talking about Hondurans, but they are El Salvadorians, Haitians, and among them you have almost half a million population in the United States, that you were tearing families apart. There have been several businesses that have come and asked the U.S. administration and show how this actually would be detrimental to their business. There are a lot of Hondurans and El Salvadorans here in the D.C. area. And the business here, and the whole community will be severely impacted.

So what, most of the people here are contributing to society, what would this administration gain by separating and rupturing families, and disrupting whole communities, and putting people in illegality? So that’s certainly something that is not beneficial to anybody, regardless of where they are born.

GREG WILPERT: Let’s turn to the legal issues that are involved. Under international law, what responsibilities does the United States have with regard to people who came to the U.S. as refugees from a disaster such as Hurricane Mitch? I mean, you mentioned earlier the issue of asylum. But, I mean, they’ve been here for 20 years. Does the U.S. have any responsibility to these people?

MARSELHA GONCALVES MARGERIN: Well, so the United States receives these individuals on this humanitarian visa, which is not a refugee status. And in the legislation for TPS unfortunately does not allow for permanent residency. So there are problems. You know, this could be fixed administratively, or by law, legislation, if there was willingness in, in Congress to actually grant a path to citizenship for people who have created their families here and contributed to society for two decades. There certainly, but you need a willingness to do that. Also, the administration could have, could actually legitimately consider the conditions on the ground. What the United States and the President and administration are doing now is actually regardless of the real situation on the, on the ground. They are just removing this humanitarian relief that they had given.

Every, so, this is a very, very dangerous pattern that we have been documenting and denouncing since the beginning of the, of the Trump administration. It’s a whole attack on the asylum and refugee and immigration system. This administration have been destroying pieces and pieces in attack, pieces by pieces. Just yesterday Attorney General Sessions announced that they will be detaining and separating, officially, children from their parents at the border. And this is a serious breach of international law, as well. So what his administration is doing, what have been documented, arbitrary, illegal implementation of the law, they are now trying to make this illegality of separating families, refusing people to receive asylum, ignoring conditions on the ground and sending people back to danger, or even their death, they are trying to put these into law and make these the law of the land.

Amnesty International and its members all over the world will continue fighting and calling their members of Congress to fix this, and not to allow this administration to destroy the protection system and the laws of the United States.

GREG WILPERT: OK. We’ll continue to follow this story, of course, but we have to leave it there for now. I was speaking to Marselha Goncalves Margerin, Advocacy Director for the Americas at Amnesty International USA. Thanks again for having joined us today, Marselha.

September 12, 2019
Sign Up for Our Newsletter
Help Us Make Real News!