NYU History Professor Greg Grandin puts Trump's call for a border wall in the context of US history, politics, and the right-wing imagination

NYU History Professor Greg Grandin puts Trump's call for a border wall in the context of US history, politics, and the right-wing imagination 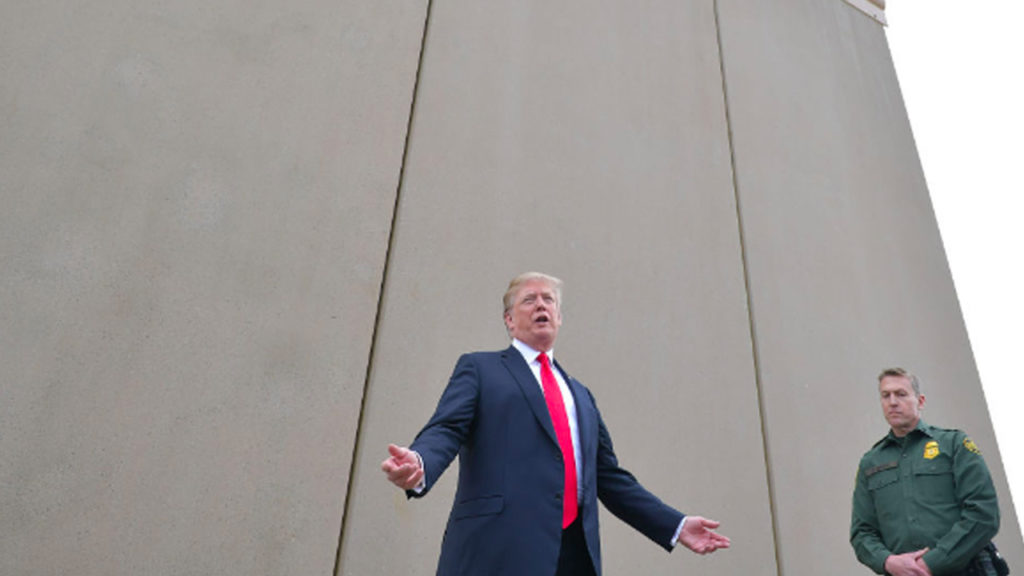 Last Friday, President Trump announced that he will invoke the National Emergencies Act in order to redirect $6.7 billion in government funds towards his project of building a border wall. This would be in addition to the $1.4 billion Congress had already appropriated last week for new barriers. Trump has repeatedly argued that there is a national emergency along the U.S.-Mexico border, leading to a so-called invasion of immigrants and soaring crime.

DONALD TRUMP: Just a few thousand feet, as an example, from where we stand right now, on the other side of the border, it’s one of the most dangerous cities in the world. Juarez, Mexico. The people in Juarez agree. Yet thanks to a powerful border wall in El Paso, Texas, it’s one of America’s safest cities, now. You’re talking a few feet away, righ? A few feet. Got a wall. It’s a few feet away. Last year, Juarez had 1,200 murders. El Paso, right next door, a few feet away, had 23 murders. That’s not good, either. But 23 compared to 1,200.

GREG WILPERT: Joining me now to take a closer look at Trump’s rhetoric and how it fits into the political imagination of the United States is Greg Grandin. Greg is professor of history at New York University, and is the author of many books. His most recent one is The End of the Myth: From the Frontier to the Border Wall in the Mind of America, which is to be released on March 5, actually, by Metropolitan Books. Thanks for joining us, Greg.

GREG GRANDIN: Thanks for having me, Greg.

GREG WILPERT: So, let’s take a closer look at what’s behind Trump’s claims. We all know that his main claims about an invasion of immigrants and about soaring crime are blatantly false. Apprehensions along the border are lower now than at any other point in the last 20 years. And as far as crime is concerned, undocumented immigrants have a crime rate that is about half as high as that of U.S. citizens. So clearly immigrants are being used as scapegoats. But what’s your take on this? Why is it that the border wall has taken such great importance for Trump and for the far right in the U.S., and how does this issue of the border figure in the context of U.S. history?

GREG GRANDIN: Well, the border wall has been the symbol and has unified a number of different Trump themes. It’s white nationalism, white supremacy. It’s a kind of a rejection of the old order, which was nominally internationalist and what he calls globalist. And he seized on the idea of a wall back with his famous announcement when he ran, that he was running for president, when he called Mexicans rapists and murderers, and he said he was going to build a great wall. And it was a symbol that caught on.

And I think it caught on for a number of reasons. One is there’s been an increased schism within the Republican Party that goes back at least to Ronald Reagan, going back to the 1970s, when undocumented migration became a policy problem. And it largely became a policy problem because of bookkeeping changes, because of changes in immigration law at the end of a guest worker program. But all of a sudden in the 1970s and 1980s, politicians in the United States began to focus on undocumented migrants as a problem, as an issue. And within the Republican Party you begin to see a split between business Republicans that wanted cheap labor, but that also corresponded to the wing of the Republican Party that believed that they could win over enough Latinos, Mexican Americans, in order to remain competitive on a national level. That the way forward was to actually increase their coalition on whatever issue that they thought they could win over Latinos.

At the same time there was an increasing nativist wing within the Republican Party that begin to bet the party’s fortune on show me your paper type laws, on making life as hard as possible. They feared that the Republican Party couldn’t actually win over enough Latinos to compete nationally. George H. W. Bush was the last president to win California in a presidential election. And this wing feared that if they were going to–if they continued to lose Arizona, or Texas, or Florida, or other states with similar demographics, they would collapse as a national party. And you saw that tension move forward and back during different moments. Under George W. Bush, he’s a classic kind of business Republican. He tried to pass through immigration reform. At the same time he started playing to the bases–the nativist base, and pretty much giving them everything they wanted in terms of militarization of the border.

When the Bush conservatism collapsed I think that paved the way for the ascension of Trumpism, the nativist wing of the Republican Party, and what we’re seeing now. And clearly this is a domestic issue. This is about mobilizing his 30-35 percent of base that–you can speak factually all you want; what matters is that they’re committed to making the country as cruel a place to undocumented workers and residents.

GREG WILPERT: Now, in your book you actually relate the border wall to the disappearance of a frontier. How did the frontier–in other words, a frontier apparently functioned as an escape valve for problems. Now, how did that work, and how did this transition take place?

GREG GRANDIN: Well, it worked in many ways. It wasn’t one simple mechanism of an escape valve. It’s easy to say that the frontier, which is kind of proxy for expansion in general, whether it be over a landed frontier, whether it’s militarism and war, through markets. But the ability to use constant, ceaseless growth, which was a prerogative of the United States since even before its inception, during its conception, the idea that the United States was self aggrandizing, that it would expand, that it would be an empire of liberty, was understood to solve a number of problems. It would dilute factionalism. It would displace racism. And the violence and racism involved in moving out on the frontier got relegated to the margins. In the 20th century we saw market expansion and expansion through war. Rallying, being able to organize domestic politics through the promise of growth and respond to social demands–there’s not one mechanism. But it’s a myriad of ways.

And one of the things that the book argues–and the frontier, of course, is the icon, the symbol of all of this nationalism. It’s probably the most important symbol of what is known as American exceptionalism. The idea of the frontier is where America moves out in the world, where it becomes itself, where it becomes liberal and international and universal as a frontier universalism. So the argument is a fairly obvious argument, right? The border wall has supplanted the frontier as the national myth. And in the book I link it to a number of things that have foreclosed on the possibility of growth. One is the disaster of 9/11, the response to 9/11. The endless, unwinnable wars that the United States threw itself into. The financial catastrophe of 2007-2008 which foreclosed on a kind of–even during the recovery it’s kind of revealed an entrenched inequality. And of course the–perhaps the biggest limit to growth is the ecological crisis; the fact that the world stands on the precipice of collapse.

All of these things, I think, help explain the ascension of Trumpism. And Trump–the kind of politics that Trump represents isn’t unique to American history. But it had been relegated and contained in the past; relegated to the margins. Trumpism becomes nationalized after the empire fails. Trumpism is what happens after empire.

GREG WILPERT: Now, would you say the mythology of the frontier is in some way better than that, than the symbolism of the border wall? Or are they both equally problematic? And what, in that case, would it need to be replaced with?

GREG GRANDIN: They’re equally problematic. I mean, the frontier … When people talk about the frontier what they’re talking about is a history of unimaginable horrors. Not just one Trail of Tears, but hundreds of Trails of Tears over the, over the century of ethnic cleansing, and conquest, and violence. It’s only through the mythologizing, the ideologizing of the frontier could it be understood that the racism and violence and brutality involved in that would be understood to be eventually left behind.

And it’s a kind of–it’s a false universalism, a false multilateralism. And if you think of how much resources the United States uses, used, say, since 1898 to the end–throughout the 20th century, you know, there’s no way that that could be called universal. The U.S. has X percent of the world’s population, and it uses a hundred times more resources. So that’s not universalism. It’s a false universalism.

The myth of the frontier created an ideology–or it allowed for the maintenance of of a centrism, a kind of–the idea of a vital centrism in which extremism was marginalized. Two kinds of extremism. The extremism of the white supremacist, but also the extremism of socialism. Property-claiming social movements. And as long as the U.S. had that option towards moving out in the world, it could respond to those two politics by marginalizing them. And now what we’re seeing, and we saw it in the 2016 campaign, is that the United States is finally being forced to confront an option that other countries were forced to confront in the past, but the United States deferred and deflected because of its unique prerogative of expansion and growth, and that’s the choice between barbarism and socialism. That’s the choice between–2016 it was the choice between Sanders and Trump. And who knows, maybe in 2020 it’s going to be the choice between Sanders and Trump. But they both represent, I think, these political tendencies that frontier universalism marginalized in the past.

GREG WILPERT: OK. Well, we’re going to have to leave it there for now, but I hope we’ll have you back to discuss your book in much greater detail. I was speaking to Greg Grandin, professor of history at New York University. Thanks again, Greg, for having joined us today.

Greg Grandin teaches history at New York University and is a member of the American Academy of Arts and Sciences. His most recent book, Fordlandia, was a finalist for the Pulitzer Prize in history.