If all the hidden parts are added together, the true military budget would be close to $1.25 trillion, says William Hartung of the Center for International Policy

If all the hidden parts are added together, the true military budget would be close to $1.25 trillion, says William Hartung of the Center for International Policy 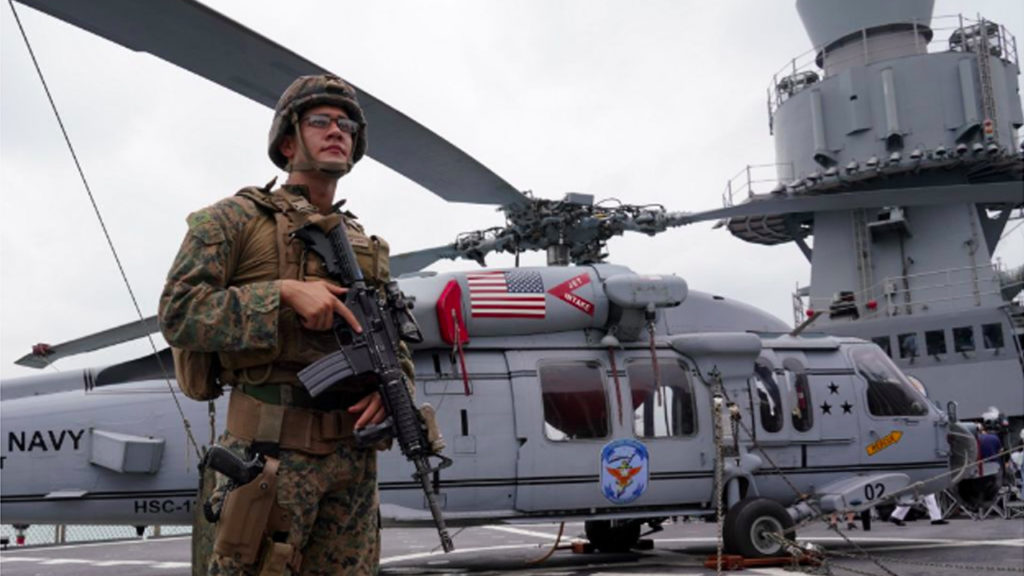 GREG WILPERT It’s The Real News Network and I’m Greg Wilpert in Baltimore. Contrary to popular belief, Trump’s military budget proposal for 2020 is far higher than the official numbers would suggest. According to one estimate, it is actually $500 billion, or 40 percent, higher. That is, according to the numbers Trump submitted to Congress. He’s asking for $750 billion in military spending for 2020, which is already $34 billion more than 2019. However, according to an analysis by William Hartung and Mandy Smithberger, the actual defense budget is closer to $1.25 trillion. I am joined now by William Hartung, one of the authors of the analysis that was published on the website of tomdispatch.com. He’s a Senior Adviser with the Security Assistance Monitor and the Director of the Arms and Security Project at the Center for International Policy. Thanks for joining us today, William.

WILLIAM HARTUNG Yes. Thanks for having me.

GREG WILPERT So in your article, you say that the official US military budget, as it is normally reported, is actually only one part of the true military budget. We don’t have enough time to go through each of the hidden budget items one-by-one, in which you list something like ten different parts, so I just want to focus on some of the more unexpected or generally unknown aspects. The first, and this is perhaps the best known actually, is the degree of waste in the military budget. The official 2020 budget proposal known as the base budget, clocks in at $544 billion. What are the most egregious examples of waste in this part of the budget, and why is that hardly ever challenged?

WILLIAM HARTUNG Well, there’s a few things. The Pentagon’s own Defense Business Board did a study a couple of years ago that said that they could save $25 billion a year if they just got rid of excessive bureaucracy, people doing the same jobs, that sort of thing. Then, related to that, the Pentagon hires 600,000 private contractors, almost as many as they hire civilian employees inside the government. If you got rid of 100,000 of those, you had only half a million, you’d save $20 billion a year. Then there’s things like spending $8,000 on a helicopter part that’s worth $500 and there’s been a big scandal just this week, a company named TransDigm with huge overcharges on spare parts, that has gotten some attention in Congress and the press. Those are the kinds of things and, of course, cost overruns— the F-35 fighter plane being the biggest example. It’s going to cost $1.4 trillion over its lifetime and a lot of that is much higher than what they originally said, both for the procurement of it and also for operating it.

GREG WILPERT And why—I mean, this comes up in scandals every once in a while, but why isn’t there more of a concerted effort to make this budget more efficient and less wasteful? I mean, you’d think that this is taxpayer money, this would be something that people running for office could campaign on. I mean, why doesn’t that happen?

WILLIAM HARTUNG Well, I think part of it is the power of the military-industrial-complex to harm its lobby, so they give tens of millions of dollars in campaign contributions, especially to members who control the budget in the Armed Services and Appropriations Committee. Every cycle they do that. They spend hundreds of millions on lobbyists, many of whom used to work either in the Pentagon or on Capitol Hill, so they have special access to government. They spread their plants over the country. Some members don’t want to vote against Pentagon-related jobs. They’ve still got this, kind of, ideology or propaganda that says somehow, we’re not spending enough, you know, for the fear-mongering aspect. All of that comes into play, but it doesn’t fully explain why you wouldn’t go after waste. I mean, waste doesn’t protect anybody. You would think even conservatives would be opposed to that and there is some of that— the Freedom Caucus in the House, certainly Charles Grassley spoke out against this recent spare parts scandal, the late John McCain was active on this front. The problem is there haven’t been enough members. There’s been some speaking out. Elizabeth Warren has a new proposal to go after corruption at the Pentagon. My hope is that it will start to be a bigger issue as the campaign heats up because there’s big programs in the works on the progressive side— Medicare for All, the Green New Deal— that’s got to be paid for somehow and the Pentagon waste is certainly one area to look.

GREG WILPERT Now the other major line item in the military budget is the so-called Overseas Contingency Operations account, which amounts to $174 billion for ongoing war efforts. This is far higher than previous years. Now, first of all, why is it so much higher? And secondly, presumably we’re going to be fighting more wars, this would be the logical explanation I guess, but that’s not necessarily true. Explain to us what’s behind this account.

WILLIAM HARTUNG Yeah. It’s a budgetary sleight of hand essentially, because in 2011, as part of the concern about the deficit, Congress put caps on the Pentagon budget. And so, they did not cap the war budget, the Overseas Contingency Operations account. So basically, what the Pentagon does is anything it can’t squeeze under the caps on its regular budget, it puts into that other account, which even Mick Mulvaney the Chief of staff of President Trump once called a “slush fund.” And so, it’s gotten completely out of hand this year where you’ve got $25 billion that’s directly for the wars out of a figure of $174 billion. Part of that includes an emergency appropriation to pay for Trump’s wall, about $9 billion. It’s basically just a way for the Pentagon to evade the caps that were put into law.

GREG WILPERT Now, there are two parts of the budget that are always left out of the official Defense Department budget, but which are clearly part of the military. That is, nuclear weapons and Veterans Affairs, which together total about $240 billion. I believe that the Veterans Affairs was $216 billion, and the rest $26 or so billion for nuclear weapons. Why are they not part of the official budget? You’d think that, you know, these are clearly military things. If they were included, the US military budget would actually, on an international comparison, be not only more than the next eight countries combined, but it would probably be more than the rest of the world combined. So, what’s going on here?

WILLIAM HARTUNG Well, nuclear weapons were originally in the Atomic Energy Agency back in the 50s when they were developed. Under Jimmy Carter, he merged that with the Energy Research Development Agency and created this super agency called the Department of Energy. It really flowed from the Manhattan Project and they never reconnected it to the Pentagon. Then veterans’ benefits, I think it’s really an attempt to understate the cost of our wars because obviously, if you’re sending millions of people into battle and they’re wounded, we’ve got hundreds of thousands of people with PTSD, thousands who were killed, tens of thousands wounded in action. That costs a lot of money to keep faith with those people and take care of them, and the Veterans Administration budget has more than tripled as a result of the post 9/11 wars. I think that is just a way to hide the true cost of war. I think it’s been effective up to a point, although, Brown University’s Cost of War Project has done a pretty good job of highlighting that in a way that wasn’t before.

GREG WILPERT And also, I think the point that you’ve made in the article also was very interesting, that it’s tripled. That is, the cost of veterans has tripled in the last— I can’t remember exactly how many years— 10 years, or something like that. I mean, that seems really stunning. I mean, what’s that attributable to?

WILLIAM HARTUNG Well, I think part of it is just so many people cycling through these wars. You know, something like 2.7 million soldiers have served at some point in Iraq or Afghanistan. And then, the nature of these wars is on the one hand, there’s better combat medicine, which cuts down on the number of people killed, which of course is a good thing, but it results in many more people surviving with very serious injuries. Then also, the nature of these wars, which are on-the-ground and in some cases even hand-to-hand combat, tends to drive up the level of people with post-traumatic stress syndrome. All those things together have made that budget mushroom and, of course, they haven’t always done a very good job bureaucratically of taking care of people, even with that huge amount of funding.

GREG WILPERT Now finally, an important point that you make about the budget is the share of the interest payments on the national debt that can be attributed to the military. You say that number is $156 billion for 2020. I’m wondering, though, how is that calculated? I mean, when the government takes out debt, it does not generally specify which debt is for the military and which debt is for civilian purposes. How can we know how much actually should be attributed to the military?

WILLIAM HARTUNG Well it’s basically a methodology that says, what percentage of the budget was military during the year that the debt was gone into, so it’s an estimated technique because you’re right. You can’t say well, this particular bond or this particular loan went for this fighter plane or anything like that, but the basic concept of, you know, if you’re running a large deficit and the Pentagon has a huge percentage of your budget that you can allocate proportionally. So, that’s how it was done.

GREG WILPERT Hmm. Well, we’re going to have to leave it there for now, but I encourage people to take a look at the article which is, as I said, on the website of tomdispatch.com and also of thenation.com. It shows a whole of bunch of other line items that actually should be included in the military, such as intelligence spending and other categories that we don’t have time to get into right now. So, we’re going to leave it there for now. I was speaking to William Hartung, Director of the Arms and Security Project at the Center for International Policy. Thanks again, William, for having joined us today.

WILLIAM HARTUNG Yes. Thanks so much.

The Link Between Immigration and the Military Budget

Canada’s Increased Military Budget Will Fuel the US War Machine

Trump Greenlights Arms Sales to Bahrain and Many Other Countries