Life expectancy in the US rose for the first time in four years because of a drop in opioid overdose deaths. Trump claimed credit, even though he's done nothing to address the problem and intends to cut Medicaid.

Life expectancy in the US rose for the first time in four years because of a drop in opioid overdose deaths. Trump claimed credit, even though he's done nothing to address the problem and intends to cut Medicaid. 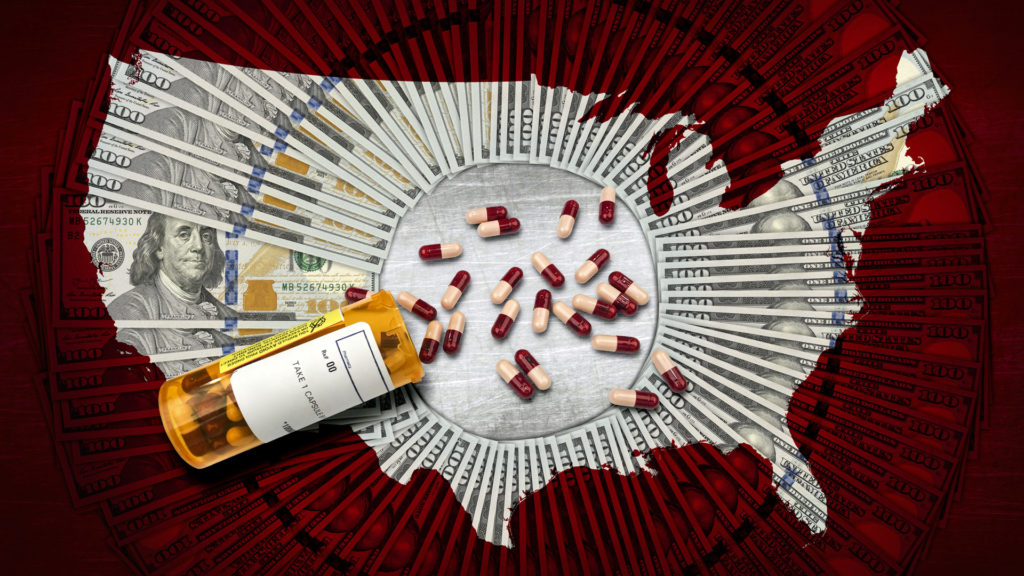 Greg Wolpert: It’s the Real News network and I’m Greg Wolpert. In Arlington, Virginia. Last week, the Trump administration made a pair of good news, bad news announcements related to the country’s health. First, the good news is that life expectancy rose for the first time in four years to 78.7 years in 2018 from 78.6 the previous year. A large part of the reason for the rise in life expectancy is that opiod overdose deaths declined by 4.1% in 2018. This was the first decline since the opiod overdose crisis began in the 1990’s.

The second announcement, which can be considered the bad news, is that White House plan to cut Medicaid funding. Medicaid provides health insurance coverage to one in five low income Americans. White House Advisor Kellyanne Conway announced the increase in life expectancy as follows’

Kellyanne Conwa: We come before you bearing good news. For the first time in four years, life expectancy in the United States of America has increased. And for the first time in 29 years, the number of drug overdose deaths has decreased. This has not happened through coincidence. It’s happened through causation. It’s owing in large part to a whole of government approach to treat the whole person led by President Trump, First Lady Melania Trump and, really, the entire administration.

Greg Wolpert: The announcement about the cut in the Medicaid program was made via a letter to state medical directors indicating that the Trump administration will allow states to switch the entitlement program, which expands and contracts according to how many people need it, to a so-called block grant where states would receive a fixed federal grant and is released from many of the rules governing Medicaid disbursement. Joining me now to discuss the significance of these two announcements is Sam Pizzigati. He’s an associate fellow at the Institute for Policy Studies and co-editor of the website inequality.org. Thanks for joining us again, Sam.

Sam Pizzigati: Thank you for having me.

Greg Wolpert: So before we turn to the rise in life expectancy, it’s important to put this, I think, in context. That is, it’s extremely unusual both in the history of the United States and in international comparison that life expectancy would drop four years in a row during peace time. Usually, this number climbs slowly but steadily. Now the US has already the lowest ranked developed country in the world when it comes to life expectancy. And the main reason for the recent decline in life expectancy has been the rise in opiod overdose deaths, which has climbed to as many as half a million lives since the late 1990’s. As someone who has studied the opiod crisis, Sam, what do you see as being the main cause of opiod overdose deaths?

Sam Pizzigati: Well, Angus Deaton, who is a Nobel Prize winning economist, talks about deaths of despair. And he’s referring there to drug overdoses, to alcoholism, to suicide. And all those numbers have increased a great deal over recent years. When we look at the opioid crisis, it’s hit the hardest in those communities and those states that have been hit the hardest by economic change in the United States. Factory towns in Ohio and Pennsylvania and West Virginia, these are the places that are suffering the most deaths of despair. And these deaths of despair are definitely and closely and directly related to changes in economic conditions.

Greg Wolpert: What kinds of changes do you mean, though? Can you be a little bit more specific?

Sam Pizzigati: Well, the basic thing is that there’s been a huge change in the distribution of income and wealth in the United States, essentially over the past 50 years, since the early 1970’s. So back in the early 1970’s, back in the middle of the 20th century, most American families could look forward to a increasingly healthier economic personal situation. That’s no longer the case. We have millions of families that have hit an economic dead end, and the result of that dead end has been an increase in these deaths of despair.

Experts on this issue, people who are looking at the real costs of opioid abuse treatment, are talking in terms of tens of billions of dollars. And we can look at this another way as well. The Sackler family, the family that ran Purdue Pharma, the corporation, the big pharma corporation that brought us the opioid overdose problem. The Sackler family has personally made between $11 and $12 billion from the opioid crisis. So that $1.8 billion the Trump administration is talking about is really a drop in the bucket of what we actually need to be doing to help families and households that are suffering from the opioid crisis.

Greg Wolpert: Now, the irony about the life expectancy announcement is that it came the same day, last Thursday, that the Trump administration announced the possibility of block grants for Medicaid. Now, explain to us what block grounds would mean in terms of policy and what effect it would have on those receiving Medicaid.

Sam Pizzigati: Sure. So right from the start of the Medicaid program, the federal government has matched what states spend for a health care for poor people. And that matching formula is based on the poverty level in the state. So a more a state votes to healthcare for the poor, the more the the state will get from the federal government in assistance for healthcare for poor people.

If you put that into block grants, then everything changes. If there’s a crisis, if there’s a greater need within a state for healthcare assistance, the state cannot get that greater assistance from the federal government because the block grant caps the total of aid that is available. So a block grant approach to Medicaid would be a disaster in terms of the support that states could count on for the federal government. A real step backwards. And all the advocacy groups that work on healthcare for the poor are dead set against this change.

Greg Wolpert: So what effect do you expect this transition to a block grant to have on life expectancy?

Sam Pizzigati: Absolutely. The gains that we’ve seen over the last year that are reflected in the new Centers for Disease Control figures for 2018 that just came out. I expect that those would be reversed and we would be seeing a decrease in life expectancy as we have in the previous three years.

Greg Wolpert: Okay. Well, we’re going to leave it there for now and we’re going to continue to follow the story, of course. I’m speaking to Sam Pizzigati, associate fellow at the Institute for Policy Studies and co-editor of the website inequality.org. Thanks again, Sam, for having joined us today.

Greg Wolpert: And thank you for joining the Real News Network.