Education Secretary Betsy DeVos's decision to stop investigating for-profit educational institutions for fraudulent practices is yet another reason to believe that the Trump presidency is most corrupt in US history, says former financial regulator Bill Black

Education Secretary Betsy DeVos's decision to stop investigating for-profit educational institutions for fraudulent practices is yet another reason to believe that the Trump presidency is most corrupt in US history, says former financial regulator Bill Black 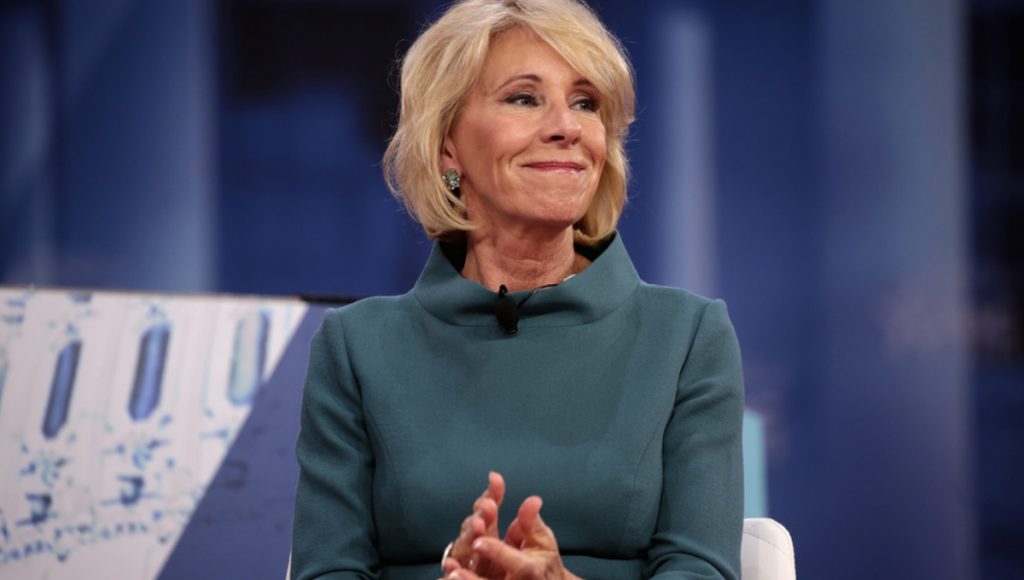 GREGORY WILPERT: It’s The Real News Network. I’m Greg Wilpert, coming to you from Quito, Ecuador. The U.S. Department of Education, under the leadership of Education Secretary Betsy DeVos, is halting investigations into fraudulent practices of for-profit colleges, according to a report that the New York Times released last Sunday. The Obama administration’s Education Department had placed a special team in charge of investigating false advertising, deceptive recruitment practices, and false job placement claims at for-profit colleges. One of the most prominent investigations was the DeVry Education Group, recently renamed Adtalem Global Education, which is one of the largest for-profit educational companies in the world, with nearly two billion dollars in annual revenues.

Joining me to analyze the consequences of abandoning these investigations into for-profit colleges is Bill Black. Bill is a white-collar criminologist, former financial regulator, and associate professor of economics and law at the University of Missouri, Kansas City. He’s also the author of the book, The Best Way to Rob a Bank Is to Own One. Thanks for joining us again, Bill.

GREGORY WILPERT: So, one interesting aspect of the story is that Education Secretary, Betsy DeVos, hired several people from for-profit education institutions to work in the Department of Education. These include Robert Eitel, her senior counselor, Diane Auer Jones, a senior advisor on post-secondary education, and Carlos Muñiz, as the department’s general counsel. What’s going on here? Shouldn’t these appointments be considered conflict of interest and ring all kinds of ethics bills?

BILL BLACK: So first, ten seconds of personal privilege to welcome into the world, three hours ago, Heidi Weaver, our new granddaughter. Second, I made the easiest prediction of my life, after Trump was elected, that Warren Harding and Ulysses Grant could rest easy in the history books because there would no longer be a debate about the most corrupt administration in U.S. history. It would clearly be the Trump administration. There’s been a lot of focus on Scott Pruitt over at the EPA, in terms of corruption. But Betsy DeVos is giving him a consistent run for the money, just more under the radar.

Now, part of that, of course, is the mortgage markets- being put into predatory mortgages at the worst possible time, at the peak of the bubble. But another thing, major thing, in terms of Blacks and Latinos, is that they are- disproportionately, they go to for-profit universities. And for-profit universities, characteristically- and this isn’t just recently, this goes back to World War II era, just after World War II when for-profit colleges first became a substantial deal.

And here’s the triple-whammy you get. One, they are much more expensive than regular universities. Two, you get a- statistically, a much, much worse education. That means your prospects in terms of jobs are far worse. And third, you’re left in massive debt because of the combination of the first two things. So that, instead of being the route to success, it is, as those overall statistics I cited, been an enormously good way of losing extraordinary amount of wealth between the mortgage markets and these for-profit universities.

So, long before the Obama administration came in, people have been writing about the really high incidents of fraud in these for-profit universities. The GAO actually sent undercover investigators that pretended to be people applying for college, which is, of course, really easy to send in testers of that kind. In every single case- so, I think they send them into the eight largest. In every single case, the supposed student was induced to do something that would be a false representation, which is to say, a crime.

In three of the eight cases, at least, the college counselor for the for-profit university consciously, expressly told them to lie and how to lie. Subsequent investigations under the Obama administration have documented the widespread layers of fraud, and for-profit universities have finally begun to experience what they should, which is that it’s very difficult- it’s more difficult to con people, and the government was finally cracking down. And that was- the problem was finally being reduced, and indeed there was some remedy at the federal level.

Because, after all, these are students had been induced by fraud to get into situations where they were literally driven bankrupt by the combination of expenses, debts, and limited increased employment prospects. And as viewers will, I hope, remember, the Republicans changed the bankruptcy laws so that student debt is not dischargeable in bankruptcy. So this, you know, is a cloud that stays over your entire life if it forces you into bankruptcy, from which you make never economically recover.

So, finally there was some recognition at the federal level that it was completely inappropriate to allow these entities to drive you bankrupt through what had been fraudulent misrepresentations to the students. And all for-profit universities live- I mean, and I mean almost totally live on federal grants to the students for education. Without those federal grants, no major chain of for-profit universities could exist. So, we’re really subsidizing all of these fraudulent entities through federal grants. And you would think an administration that A, promised to drain the swamp, and B, to stop these kind of rip-offs of the public sector, would crack down. But of course, none of us is surprised at this point to learn that it’s exactly the opposite.

The metaphor usually used is that DeVos has put the fox in charge of the chicken coop. But it’s really more- the way these for-profit universities operate, it’s more like you would put the vampires in charge of the blood bank, because they are basically sopping up the lifeblood of middle and working-class, and even poor people, through this device of the for-profit fraudulent rip-offs. And Betsy DeVos is now ensuring that the vampires can do this with absolute impunity from the laws.

GREGORY WILPERT: Now, Bill. The New Jersey attorney general complained on Thursday that the Department of Education is halting these investigations into for-profit educational institutions and is not even sharing information with states. So, I’m just wondering- maybe we could into a little bit of detail as to what kinds of shady practices these for-profit colleges are known for. And why is it so important to have the U.S. Department of Education investigate these practices, instead of having individual states in which they operate do these investigations and prosecutions?

BILL BLACK: So, I’ll take the last question first, because it’s the easiest. Only at the federal level can you shut down these fraudulent operations through a single action where they operate, which is typical, these chains of for-profit schools often operate in many states, sometimes all fifty states. Education also has, the Department of Education, all of the key data, because they go at the federal level, and they can and should share that with federal- sorry, state regulators and prosecutors.

And what we’re seeing is, again, akin to the 2008 financial crisis, where the Office of the Comptroller of the Currency and the Office of Thrift Supervision deliberately, and I mean that absolutely, deliberately- there’s no if ands or buts, sought to prevent effective regulation and enforcement, and even prosecutions, by state authorities. And we all know how disastrously that ended up.

As to the kinds of frauds, they are myriad. So, one, you are frequently taught, as an applicant, to file false financial information, with the idea of maximizing the federal scholarship. Two, the institutions do not deliver the promised education. They make all kinds of promises. As almost everybody in the United States knows, these for-profit schools are major advertisers, and it’s a bad sign. It’s usually on cable television after 11:00 PM, when a very high percentage of the ads are frauds. And these promise transformations, and they talk about the graduation rates, they talk about what kind of salary increase that you can expect. And there have now been hundreds of successful lawsuits against these, demonstrating in great detail- but only if you have the data, and hence DeVos’ action- that none of these promises come close to being met.

So, for example, they would talk about characteristic increases in your income after you get a degree of fifty, sixty thousand dollars. And they knew that A, the typical person entering these doesn’t complete the program, because A, they discover the program is so bad, but B, they frequently discover that they, in fact, don’t have the abilities in those particular programs. And the educational institution isn’t there to help and succeed. It is there solely to take money from them.

So, it’s the combination of types of frauds that, again, leave you- most typically, when you come out of these universities with no significant increase in your ability to get employed, and certainly no substantial salary increase- but again, most of the folks don’t even get the flaky degree and end up simply in debt and, not infrequently, in bankruptcy type situations.

GREGORY WILPERT: Of course, we need to remember that Donald Trump himself was a major owner of Trump University- the owner and the person behind Trump University, which itself has been accused of many of these practices. But unfortunately, we’ve run out of time. So, we’re going to have to stop here for now. I was speaking to Bill Black, associate professor of economics and law at the University of Missouri, Kansas City. Thanks again Bill for having joined us today, and congratulations on your granddaughter.