Toronto Residents Face Off Against Google over Waterfront ‘Smart City’

A subsidiary of Google wants to build a 'Smart City' on Toronto's Waterfront. But with billions of dollars in real estate and infrastructure at play, residents are pushing back against a proposal that they say could have terrible consequences for public services as well as privacy

A subsidiary of Google wants to build a 'Smart City' on Toronto's Waterfront. But with billions of dollars in real estate and infrastructure at play, residents are pushing back against a proposal that they say could have terrible consequences for public services as well as privacy 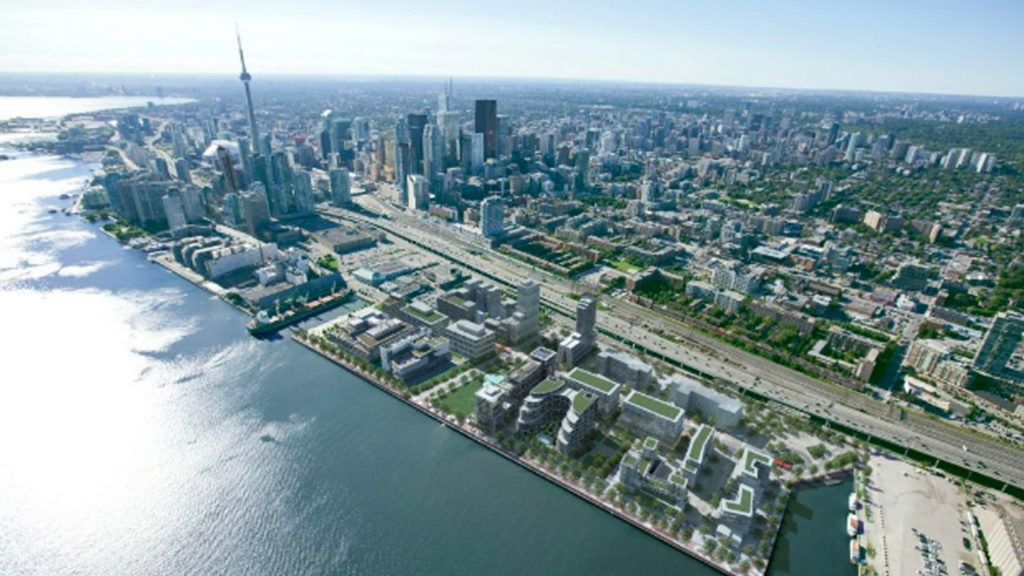 NARRATOR: It may not look like much, but this plot of land on Toronto’s waterfront is now ground-zero for a debate on what role technology and corporations will play in future city building.

In 2017, Sidewalk Labs, a subsidiary of tech giant Google, won a bid to develop a so-called “smart city” prototype on this 12-acre, former industrial site. Though Sidewalk Labs declined to comment and would not grant us permission to film inside their Blue Lakeshore facility, here is where they demonstrate what amenities would be enjoyed by the 5,000 would-be residents, including streets that heat up to melt ice and snow without salting, and awnings for buildings that would lower and raise temperatures.

While no official proposals have been given to Waterfront Toronto, the government agency that awarded the bid, leaked plans published by the Toronto Star have raised interest, but also criticisms.

For University of Toronto Professor Mariana Valverde, the spectre of the private sector building infrastructure is worrisome.

MARIANA VALVERDE, PROFESSOR, CENTRE FOR CRIMINOLOGY AND SOCIOLEGAL STUDIES, U. OF TORONTO: They had this whole infrastructure plan, and that they were going to seek private financing to build an LRT. And then they wanted to collect part of the taxes or be owed part of the taxes and development charges.

NARRATOR: The leaked plans suggests the tech firm would look to build major infrastructure like light rail and even sewage to service the area. The privately built infrastructure would be paid for by Sidewalk, who would then recoup their investment by directly tapping into public revenue streams.

This would be unprecedented in Canada, where infrastructure and services like transit are seen by the majority as public domain, and almost exclusively controlled and regulated by government.

After the leaks surfaced in the media, residents formed Block Sidewalk. According to spokesperson Thorben Wieditz, they aim to educate the public about the potential impacts of the project, as well as to demand transparency.

THORBEN WIEDITZ, BLOCK SIDEWALK: The notion that we allow a Google sister company access to publicly owned land in the City of Toronto, future revenue streams, and allow them to develop new forms of delivering municipal services, I think is something that strikes a nerve for a lot of people, and the way this deal came about is something that we have to look closely at and ensure that the interests of Torontonians and not the interests of one of the richest companies in the world are at play here in the city.

NARRATOR: Sidewalk labs committed $11 million of its $50 million dollar budget to public engagement, and say some 20,000 people have been consulted.

While locals packed a community centre for the groups first meeting, a recent Environics Research poll suggest the proposal is still seen as favorable by 55% of the public, and also enjoys support from prominent quarters in the City.

Brian Kelcey is Vice President of Community Relations for the Toronto Board of Trade.

BRIAN KELCEY, VP COMMUNITY RELATIONS, TORONTO BOARD OF TRADE: Well, it’s potentially positive, and we want to emphasize potentially, as we haven’t seen a final. It’s potentially positive because of the jobs you can bring to the city, the potential for innovation, and most of all that the waterfront Portland area has been underdeveloped old industrial brownfield space for too long.

NARRATOR: The debate around economic issues, including the pros and cons of private financing of public infrastructure, are bound to heat up after the submission of Sidewalk labs’ official proposal. However, experts and politicians are already deliberating over data collection and privacy concerns.

Data-collecting sensors and technologies would be set up to track the moves and habits of residents and visitors alike in the area in order for Sidewalk’s technologies to function. Given the lack of precedent, there are few rules around what can or can’t be done with this information, and perhaps even less understanding about what this could mean for people and their privacy.

BRIAN KELCEY: For us the biggest concern is around data and data privacy. And what makes what Sidewalk has proposed different from a number of other more conventional debates are on data and data privacy in this country talking explicitly about gathering and building applications and services off of what we call public realm data.

NARRATOR: Toronto City Council passed a motion to build a regulatory framework around this sort of data collection and smart cities, anticipating other projects like this in the future. The Toronto Board of Trade has also suggested that the public library would be a suitable host for this information, but critics point out that the concerns around data collection are not just about privacy, but also what the possible monetization of this data might mean for the public.

MARIANA VALVERDE, PROFESSOR, CENTRE FOR CRIMINOLOGY AND SOCIOLEGAL STUDIES, U. OF TORONTO: I think it is a huge problem that the company that approached the federal government, and then through that ended up in this relationship with Waterfront Toronto, that that company is the Google company. That’s a huge problem, because they own thousands of intellectual property patents. That’s one of the problems. So that even if a lot of data is collected, and even if they say “Oh, the city can have access to the data,” maybe the city, because you will need to buy a license for some algorithm that Google owns. That’s how they make their money.

NARRATOR: The Canadian Civil Liberties Association has now filed a lawsuit against the project and its proponents, citing potential privacy breaches and violations to constitutional rights. Adding to the dimension of the implications for this project, which involve billions of dollars, the value of the land that is part of proposal alone is estimated at $500-600 million, and Sidewalk has already signaled their intention to expand this to other lakefront property–up to 350 acres–on what is among the most expensive real estate in North America, undoubtedly worth billions; a reality that has a growing number of Torontonians like Mariana Valverde worried that cash-starved governments could be conceding too much to one of the world’s biggest transnationals.

MARIANA VALVERDE, PROFESSOR, CENTRE FOR CRIMINOLOGY AND SOCIOLEGAL STUDIES, U. OF TORONTO: So what we have here is not a development proposal, it’s this sort of aggregate of a lot of different things, some of which we don’t know what they are. So Waterfront is essentially giving away a lot of stuff, but they don’t even know what they’re giving away.

NARRATOR: Google is just one of numerous transnational tech companies, including Apple, Amazon, and Microsoft, looking to make inroads as a developer.

Facial Recognition Technology Ban for Police Is Important, but Not Enough