In part three, authors Shani Robinson and Anna Simonton argue a lack of efforts to confront poverty and excessive standardized testing continue to set up students to fail

In part three, authors Shani Robinson and Anna Simonton argue a lack of efforts to confront poverty and excessive standardized testing continue to set up students to fail

The Untold Story of the Nation’s Biggest School Cheating Scandal 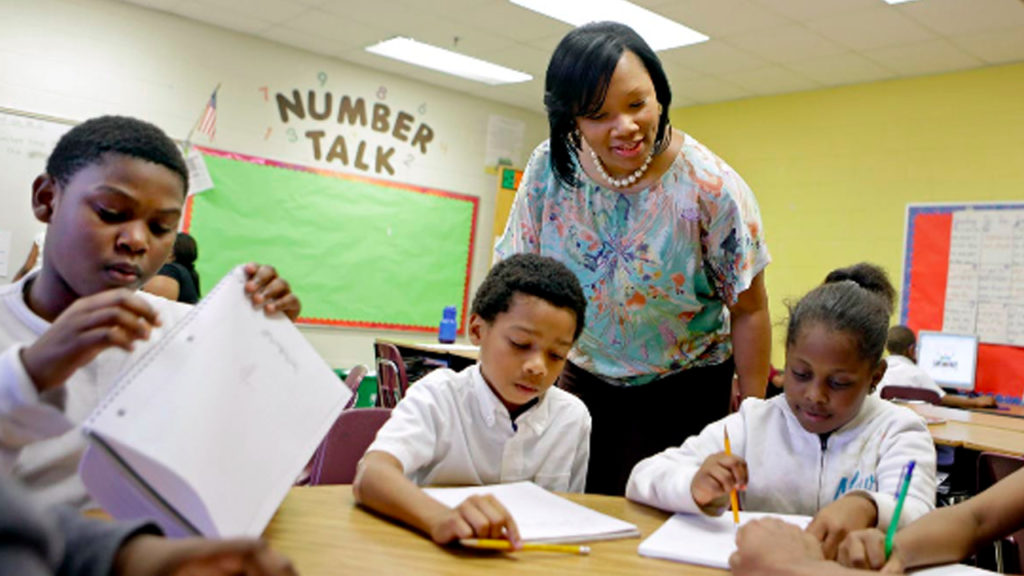 JAISAL NOOR: And so, you’re currently appealing your conviction. That’s finally moving forward, from what I understand. Two other defendants’ appeals were just denied. Can you talk about what happened?

SHANI ROBINSON: Right. They appealed the case all the way to the U.S. Supreme Court, but unfortunately the U.S. Supreme Court did not hear the case. These two codefendants had to turn themselves in to prison in October. They’ve been in prison since October and they have children. One of them has– I think he’s about 14-years-old, a middle schooler. I can just imagine what he’s going through, not having his mother at home at such an impressionable time. But those two co-defendants handled the appeal in a different way. We’re still hoping that, number one, we can get the judge off of this case.

SHANI ROBINSON: Yes. Our attorneys have asked him to recuse himself. He refuses. He actually retired and they reassigned our case to another judge. But somehow, this same judge has been allowed to remain on our case. We have no idea how this is happening. They’ve even taken the issue to the Georgia Court of Appeals. So far, they have done nothing. We’re just hopeful that at some point someone will take a hard look at what actually happened and take it seriously because so many things were done incorrectly in this case. He can’t be impartial. Right before the verdict was released, he told the jury, whatever your verdict is I will defend it until I die. So it’s hard to believe that he can continue to be impartial.

JAISAL NOOR: And then he was in the jury room, as well?

SHANI ROBINSON: He made a comment. It was a strange comment during the trial. I can’t remember which defense attorney said this, but I think he said something to the effect of, this is the judge speaking, something to the effect of his client, Ms. Cottman–she had a speedy trial. Maybe it was a couple of years before our trial, but they were saying well the jury said that if cheating was the issue, they would have come back with the guilty verdict because she was found not guilty.

ANNA SIMONTON: Which is a whole other issue because she shouldn’t have been in this siting the RICO trial because she was actually acquitted on the underlying charge that RICO is then applied on top of. So it was essentially double jeopardy and that was why her lawyer was bringing this up with the judge. But he said no, in that case the jury said such-and-such when I was in the jury room.

SHANI ROBINSON: And we were thinking, what are you talking about? Was he really back there? Was he just making this up? But he made that comment and said well, they said it in the jury room. So we’re just thinking, this has just gone too far.

JAISAL NOOR: And so, while this whole case was unfolding, you have this aggressive push to expand privatization. Charter school supporters were pointing to this trial, which they want to use these kinds of opportunities to say, public education is failing. Let’s try something different. Let’s try charter schools and these will be a better alternative to this scandal-ridden public school system.

SHANI ROBINSON: During the middle of our trial, the local paper released an article called, “‘D’ is for Darn Good Charter School.” This is right during the middle of our trial, and the article was about how the trial was a reminder of everything that was sordid in Atlanta Public Schools. Then in the same article, it talks about how Drew Charter School is a symbol of hope and renewal. It was so blatant what they were doing, almost like saying, look at how awful public education has become. Let’s fix it by opening up some more charters.

ANNA SIMONTON: So on the day that the prosecution rested in the case, the Governor at the time, Nathan Deal, introduced a proposal to create the Opportunity School District and this was a copycat of Louisiana’s Recovery School District, which was used to turn most of New Orleans Public Schools into charters after Hurricane Katrina. So the timing of his announcement furthered that agenda because the prosecution had rested. The media was sort of recapping what had gone on in the case, or at least what had been reported, which was a lot of the more sensational parts and not really giving enough airtime to some of the things that actually undermined the prosecution’s evidence. Here you have the Governor saying– on the day that we’re looking at how these terrible schools are failing and corrupt– he’s saying, what we should do is create this sort of statewide authority that can take over local schools and turn them into charters. And so, that was another way that the narrative around this case was serving to advance the corporate education reform movement.

JAISAL NOOR: And the book ends on a somewhat of a high note, I guess, sort of. You end by talking about how this was rejected by voters. You talked about how the teachers, it was the NEA, one of the large teachers unions, ends up spending some money in that campaign, which otherwise the conversation had been dominated by these corporate interests. Can you talk about that?

SHANI ROBINSON: Right and it really shows us that if we come together, anything is possible. I look at all of the strikes that are happening across the country, the teacher strikes, because they are basically saying, enough is enough. We’re tired of high-stakes testing, having to teach towards the test, the low pay, and the large class sizes. And so, I think that the book is actually coming out at a really critical time because it helps us put the pieces together as to how we even got to this point in the first place.

ANNA SIMONTON: Yeah and the importance of that campaign was just so much about how the grassroots was able to pull together to defeat the Opportunity School District. The NEA came in and enabled folks with the money that they threw down to buy ads and hire canvassers, but it really started as an initiative among parents, teachers and folks really from different political persuasions coming together to say that this won’t be good for our communities and they were able to defeat this in spite of the fact that so much corporate money was being funneled into the pro-Opportunity School District campaign from the likes of the Walton family and some of the biggest heavy hitters in the corporate education reform movement.

JAISAL NOOR: And so, this would allow the state to take over the most at-risk schools that were the ones that are the most underfunded and least resourced, and allow them to be subject to privatization and other reforms. Is that right?

ANNA SIMONTON: Exactly. And it was kind of a land grab because the local school districts would still be responsible for the costs of upkeep of the school buildings, but the state would be able to bring in whatever charter companies and they would have access to these buildings for free. There is also issues around what was considered a failing school and questions around even the metrics of determining whether schools are doing so poorly that they should be subject to this kind of takeover. So there were just many problems with the idea, that communities ultimately rejected it.

JAISAL NOOR: And you mentioned the recent wave of teacher strikes that have been unfolding over the past year. Do you think we are seeing a broader change in the conversation around education and education reform in this country? We still have work to do around that, but can you talk about the issues of educational justice?

SHANI ROBINSON: Yeah. We need to take a hard look at how standardized tests are used in this country. I think that teachers across the country are still complaining that they feel pressure to have to teach toward the test. I have a 4-year-old now and I would like for him to attend a public school, but I don’t want his teacher stressed and feeling like she has to teach toward a test. I want him to be in a creative environment, but the testing industry is a multi-billion-dollar industry. In a lot of ways, it’s really going to take a collective effort to really galvanize around this issue, to really change the conversation on how these tests are used, because it really seems like it’s more like punishing educators in a way and only holding them accountable. But we know that there’s so many other factors that go into the classroom.

JAISAL NOOR: Yeah what a lot of people don’t know is that the most successful countries, the number one countries in the world around education, they don’t use these standardized tests. They have other forms of assessment that involve teachers and students collaborating on projects, but this started in America, this whole idea of standardized testing as a form of assessment.

SHANI ROBINSON: Yeah. And I think that has led to this demonization of educators. One of my favorite slogans that has come out of this wave of teacher strikes is that, “our working conditions are children’s learning conditions.” No longer having this false division between what’s good for students and what good for teachers, but looking holistically at what’s needed for students, teachers, and parents, and the whole community.

JAISAL NOOR: Okay. We want to thank you both for spending this time with us. Shani Robinson, thank you so much. Good luck with your appeal. We know that’s coming up. Hopefully this speaking tour is helping bring more attention to your case. And Anna Simonton, thank you so much for your work as well.

SHANI ROBINSON: Thank you so much for having us.

ANNA SIMONTON: Yes. We appreciate it very much.