A Saudi-led airstrike has killed dozens in Yemen's port city of Hodeida amid UN warnings of another catastrophic cholera outbreak. Professor Isa Blumi of Stockholm University and author of "Destroying Yemen," discusses the motives and impact of the unrelenting US-backed assault

A Saudi-led airstrike has killed dozens in Yemen's port city of Hodeida amid UN warnings of another catastrophic cholera outbreak. Professor Isa Blumi of Stockholm University and author of "Destroying Yemen," discusses the motives and impact of the unrelenting US-backed assault

The Saudi-US Agenda Behind Destroying Yemen 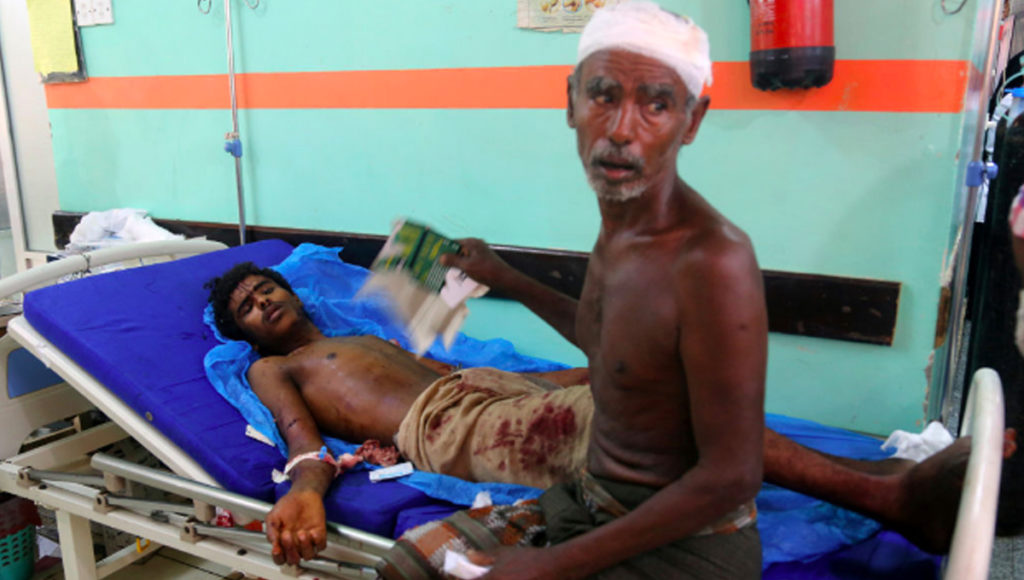 AARON MATE: It’s The Real News, I’m Aaron Mate, part two with Isa Blumi. He is associate professor at Stockholm University and author of destroying Yemen: What Chaos in Arabia Tells Us About the World. So, we’re talking about the Saudi-U.S. agenda behind the attack on Yemen and I want to go to a clip from PBS News Hour, which recently spoke to residents of Yemen who expressed their frustration at the U.S. role in the Saudi-led bombing.

ISSAM AL DAILMY: From the United States, Mr. Obama or the other presidents, they said, “We will help Saudi Arabia for the war in Sanaa.” And the new one, Trump, he says, “We will support our friend.” What does it mean? He will support them to kill us.

AARON MATE: So, that’s a clip from PBS News Hour and it stands out as being one of the few U.S. media reports on the U.S. role, especially in the attack on Yemen. To illustrate, the group FAIR recently put out a story by Adam Johnson which noted that it’s been over one year since MSNBC, the leading liberal network, did even a segment on Yemen. And by contrast, they said that MSNBC during that period did four hundred and fifty-five stories on Stormy Daniels versus zero on Yemen. So first, Isa Blumi, if you could comment here on just how critical the U.S. role is in the Saudi-led attack on Yemen. Could it be going on without U.S. support?

ISA BLUMI: It’s so critical that actually it’s an innaccuracy to call it a Saudi-led attack. It’s actually an American, U.K., if we’re going to be generous to the tiny empire, campaign against an insubordinate corner of the world. We’ve seen pictures now of the control room in which American soldiers are behind all the buttons that need to be pressed. And they’re the ones who are looking into the monitors that will then identify the targets. And again, they’re the ones who have long mastered, originally in Yemen by the way, the double-tap technique of maximizing the kill around an initial attack. So, the Americans are, front and center, responsible. Now, which Americans? Now, Aaron, you’re an American and your team in the studio are Americans. You’re not responsible and I assure you Yemenis are fully cognizant of that.

But they do also know very well that without the kinds of mobilization of people like yourself, the media, the very fact that the MSM, the mainstream media, does not report on this suggests how complicit the centers of power of corporate finance and political actors across the board, Democrats, Republicans, Idependents are, understands the importance of shutting up about this war. There are consequences to this war are failing, there are consequences to this war dragging on as it is. It’s a very lucrative war and it also has a very interesting long-term structural consequence for the entire region, which I think some actors in Washington and indeed the larger Atlantic world are actually gearing up for. Now, I can elaborate later, but the Americans are front and center, solely responsible for this war continuing on as it is.

AARON MATE: So we have to wrap. So, let me ask you, how is it lucrative and how does it fit into those structural benefits that you’re talking about?

ISA BLUMI: Military industrial complex, obviously. Weapons contractors, they’re the ones who are getting paid up front. There is no check which will never be paid or that it will be balanced. They’re getting money upfront, Saudi Arabia is borrowing money left and right, hand over fist. The ruling family has been arresting cousins and other billionaires in the region to pay for their bills for this war, which means that some companies that construct the weapons who offer the logistical support, who provide the PR- think of all those companies in Washington in London who are getting paid to cover up this campaign, who are providing the kinds of weapons, the word weapons, the language for us to all end up being distracted by Iran, by Saudi Arabia by the Houthis.

And in fact, this is a campaign to restructure entirely the regional economy, assure that China, assure that other rivals to the Atlantic Empire, does not gain a foothold in exactly these areas where the last remaining untapped natural resources remain from the fisheries, from the mines, from the oil and gas, to the strategic chokepoints like the Bab-al-Mandeb which Israel just two days ago has, in a bluster, said that they will help the Saudis and others defend from Iranian encroachments. So, we’re beginning to start seeing the relationship between the exploitation of natural resources, the damming, for instance and Ethiopia of the Blue Nile, is all part of this long-term project to completely reorientate the region to become an interesting kind of self-sufficient grand-scale productive zone for agriculture, for industrialization, and not necessarily a move away from oil and gas, but a kind of utility of whatever kinds of resources, what kind of financing they can get from their oil and gas to reorient these economies.

But Yemen is in the way, the family in Saudi Arabia is in desperation. This is why they were on board to initiate this war. They’ve been in competition with our GCC partners and this war will end up very badly for Saudi Arabia. And that for that reason is why, structurally, the Middle East will look very differently in ten years, if not sooner.

AARON MATE: We’ll leave it there. Isa Blumi, associate professor at Stockholm University, author of Destroying Yemen: What Chaos in Arabia Tells Us About the World. Professor Blumi, thank you.