Now that Argentina received the International Monetary Fund's largest loan ever, of $56 billion, it is recommending more austerity, which, as the data so far shows, will only prolong the country's economic crisis, says CEPR's Mark Weisbrot

Now that Argentina received the International Monetary Fund's largest loan ever, of $56 billion, it is recommending more austerity, which, as the data so far shows, will only prolong the country's economic crisis, says CEPR's Mark Weisbrot 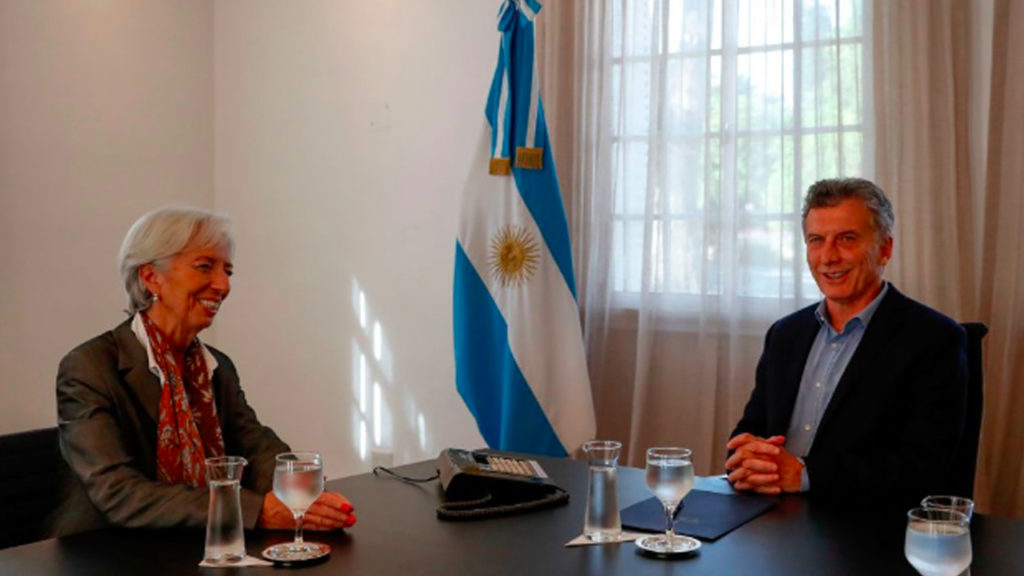 Could Argentina be heading into another economic crisis similar to the one it experienced in 2001-2002, or the one that Greece has experienced ever since 2011? At the moment, Argentina’s economic indicators look far worse than what the International Monetary Fund had predicted back in June, when the country took on a $56.3 billion emergency loan from the IMF, the biggest IMF loan in history. As a condition for the loan, the government of Argentine President Mauricio Macri and the IMF signed a so-called standby agreement, whereby the government is committed to impose austerity measures on Argentina, such as laying off public employees, cutting government spending, and raising interest rates. This has, of course, led to numerous anti-IMF protests over the past year.

Joining me now to take a closer look at the IMF’s role in Argentina is Mark Weisbrot. Mark is the co-director of the Center for Economic and Policy Research in Washington, D.C. Thanks for joining us again, Mark.

MARK WEISBROT: Thanks for having me, Greg.

GREG WILPERT: So how has Argentina actually done since their signing of the agreement with the IMF back in June when they received that loan?

MARK WEISBROT: Well, the IMF made projections when they signed–when the government signed that agreement. And it turned out to be way off. So for example, the economy was supposed to return to growth now. It’d be growing now, and have a positive 0.4 percent growth for the year, and positive growth for next year. And–about 1.5 percent. And as it turns out now, they’re going to have negative growth of 2.8 percent this year, and negative growth of 1.7 percent next year. So that’s a pretty serious recession, and it’s a very big forecast error of more than 3 percent of GDP. And their forecast for inflation, interest rates, were also way off.

So they really, they really didn’t anticipate that their policies would lead or intensify a recession like this, or at least they pretended not to. I mean, it’s hard to say what they really want, because if you read their papers it’s clear that they’re using the recession to bring down inflation, and also to shrink the current account deficit. So in the case of inflation, if you shrink the economy you know that’s going to usually bring down inflation. And it will also reduce imports, because people and businesses have less money to spend, so they’ll import less. And that reduces the trade deficit. So this is one way to reduce these imbalances. But it’s a kind of brutal way that causes hardship and suffering for millions of people.

GREG WILPERT: So then why has the economy done so much worse than expected? I mean, what are the factors at play, here?

MARK WEISBROT: Well, I think the premise of this whole program, if you want to take them at their word–and the government, too, by the way, the government says very explicitly that they own this program. They’re not trying to blame the IMF for doing something that they didn’t want. They’re in on this. And if you listen to the rationale from these parties they will say, the the government and the IMF, that they’re restoring confidence in the economy. So by showing they can cut the deficit, they can do this fiscal tightening, and greatly reduce the budget, the federal budget deficit, and also tighten monetary policy. That is, with higher interest rates. And in this case they did something that’s even more kind of extreme, which is they said they won’t allow the monetary base to grow until June at all, zero percent.

GREG WILPERT: Now, as I mentioned earlier, the last time Argentina had a major economic crisis was back in the 2000s. And, actually, from ’98 to 2002. Is this crisis going to be as bad as the one back then?

MARK WEISBROT: Well, it shouldn’t. I mean, from 1998 to 2002 you had something comparable to our Great Depression. The GDP shrunk by more than 20 percent. Unemployment peaked at over 21 percent. And the poverty rate shot up from the 20s to 42, 43 percent. And so this was really, really terrible. But they had a much worse situation to start out with. They had this fixed, overvalued currency that was tied at 1:1 to the dollar that was completely unsustainable, and they had a really unsustainable debt. As they went through this crisis it got worse. And so they had to really default on their debt and undergo a massive devaluation. They changed their whole exchange rate system, as they did in December of 2001 and January of 2002, in order to just get back to growth. And they were successful after they did that, and they got rid of the IMF.

This time it’s not as bad. I don’t think the debt is really that unsustainable, though President Macri’s certainly made it a lot worse. Especially the foreign part of the debt, which is the more dangerous and important part. He’s increased that from $30 billion to over $65 billion since he took office at the beginning of 2016. And so you do have–you have a current account deficit, the IMF projecting it over 5.2 percent this year. That’s like the trade deficit, but the other current expenditures included as well, which half of it is actually interest payments.

So they have some problems, and they’re not trivial. But they’re not at the level that they had in that great recession that they suffered from 1998 to 2002. Now, it could get a lot worse. And you know, they did have a serious crisis this year, and they’re still in it. So there are very serious problems, but it shouldn’t descend into the kind of thing that it did the last time. It would take more and more repeated errors of this sort to get there.

GREG WILPERT: So what do you think this tells us about the IMF, and its role more generally? I mean, to a large extent they can be blamed, as well, for the economic crisis, as you’re suggesting. And why do they keep imposing these kinds of policies on countries?

MARK WEISBROT: Well, part of it is their own beliefs and their own ideology. And of course, they’re divided on that. The research department tends not to agree with this kind of thing, but they don’t. They’re not the dominant force. Part of it is the United States controls the IMF for most of the world, the U.S. Treasury Department. So they have an influence. I’m not sure they want–it’s kind of ironic. I’m not sure they want President Macri to lose the election next year. But that could happen as a result of the recession that they’re imposing. So it’s complicated to explain exactly why they would do this. But they do believe that, you know, the recession is going to restore or resolve these imbalances, and they seem very often oblivious to the fact that it creates other imbalances and can create a severe recession. And I think they also are looking out, obviously, you know, generally they look out for the creditors and the big financial interests. But very often they go so far with this, as they did in Europe, that those interests lose out as well.

So again, it’s a complex thing to try and explain. But I think the main thing that’s important is that they really are an instrument, to a large extent, of U.S. foreign and economic policy. For example, if they didn’t have this right-wing neoliberal president who is very close to the U.S. government, they wouldn’t have gotten a $56 billion loan when their economy ran into trouble.

GREG WILPERT: OK. We’re going to leave it there for now, but we’ll continue to follow the situation. I was speaking to Mark Weisbrot, co-director of the Center for Economic and Policy Research. Thanks again, Mark, for having joined us.

GREG WILPERT: And thank you for joining The Real News Network. If you like Real News Network stories such as this one, please keep in mind that we are nearing the end of our winter fundraiser and need your help to reach our goal of raising $400,000. Every dollar that you donate will be matched. And unlike practically all other news outlets, we do not accept support from governments or corporations, and depend on our viewers. Please do what you can today.

December 16, 2019
Sign Up for Our Newsletter
Help Us Make Real News!