Andrea Ritchie, author of "Invisible No More," explains how police strategies like 'zero tolerance' implemented by purportedly liberal states have wreaked havoc on the lives of black women

Andrea Ritchie, author of "Invisible No More," explains how police strategies like 'zero tolerance' implemented by purportedly liberal states have wreaked havoc on the lives of black women 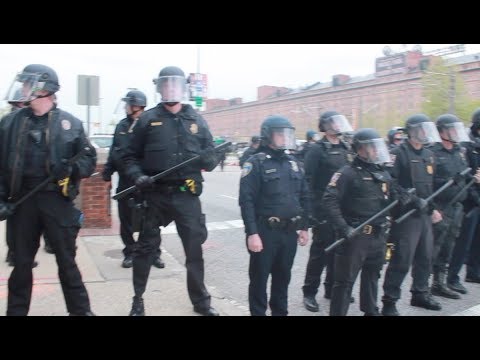 Could you tell us some of the ways that Black woman and black trans women are uniquely targeted by policing?

ANDREA RITCHIE: I think one thing to know is that Black women and trans women, including trans women, are targeted by policing in many of the same ways that Black men are, and so for instance here in Baltimore Black women make up 71% of the arrests of women in total, which is a very similar rate of racial dispersity as Black men. Anywhere we’re looking, where we’re seeing policing of Black men, the same thing is happening to Black women. Then, there are unique ways in which it takes place. Here in Baltimore, the Consent Decree investigation found for instance that police officers engage in a great deal of sexual violence against Black women including and especially trans black women, and that the Department doesn’t really do anything about it, fails to investigate it and allows it to happen.

Unfortunately, the Consent Decree itself doesn’t directly address this but women who are organizing on the ground, women who are being targeted for drug arrests, prostitution arrests or just public order arrests are particularly targeted for this kind of violence, and it’s something that is not part of our national conversation around sexual violence that’s happening right now and needs to be. That’s one way. There’s other ways in which Black mothers and pregnant people experience policing. For instance, here in Baltimore, a woman named Star Brown, a 26-year-old Black woman, came home from work as an accountant one day and saw some fighting among young women on the street. The police showed up. The perpetrators ran away. The police were yelling at the victims. She just went over the police and said, “Look, you might want to go chase those girls. Those are the ones responsible.” The office took her, put in a chokehold, took her to the ground forcefully despite the fact that she and her neighbors were saying that she was pregnant.

TAYA GRAHAM: Now, you mentioned police officers and sexual assault. We know the case of Daniel Holtzclaw. That he actually targeted Black women specifically for sexual assault because he thought they wouldn’t be credible witnesses. Can you tell me a little bit about how often law enforcement officers are actually engaging in sexual violence?

ANDREA RITCHIE: I wish we knew. There’s no official statistics on it but the research that is conducted suggests that it’s happening in a systemic basis, a great deal. What numbers are available show that it’s the second most frequently reported form of police misconduct after excessive force, even though it’s not the second most frequently talked about. One study found that an office is caught in the act of sexual misconduct every five days and that’s just the ones who are caught. Daniel Holtzclaw is only unique in that he was caught and prosecuted and convicted and sentenced to 263 years. His targets, his methods, the context in whether he did it, whether it was the war on drugs, policing prostitution or broken windows policing. Those all serve traffic stops, responses to calls for help. Those are all contexts in which police officers are targeting women across the country.

The research shows that it is disproportionately Black women, disproportionately young women, disproportionately homeless women, low-income women, and women who are or perceived to be involved in sex trades or drug trades. In other words, women who exactly as Daniel Holtzclaw and other folks who do this say that they will not be believed. That’s what they count on, and that’s certainly was his defense in his case and that is certainly what is reflected in the investigation files whether it’s here in Baltimore or in other cities where police officers hear about these complaints all the time, but the people who are bringing them are dismissed. The investigations are never pursued or they’re stopped and ultimately ends up turning on the credibility of the women coming forward because they’re not seen as respectable or valid victims of police violence.

TAYA GRAHAM: Now, you mentioned that Black women’s bodies were targeted in a particular way, that black motherhood actually had violence, state violence enacted against it. Could you talk to me a little about that?

ANDREA RITCHIE: I think that the perceptions of Black mothers that are perpetrated in not only through slavery that Black mothers don’t care for their children properly, are excluded from the realm of motherhood. When in fact it was slavery what doing that to black women, not an inherent characteristic of Black women by any stretch of the imagination. Taking them away from their own children to care for white children, selling them away from their children. The stereotypes used to justify that were, “Oh well, they don’t care anyway. Right?” That was it was normalized.

TAYA GRAHAM: Maybe you could talk a little bit about how even in democratic states or even among supposed liberals or progressives, some of these policies are still criminalizing the populations that are supposed to be protected.

ANDREA RITCHIE: I think that the notion that broken windows policing for instance makes us safer is a complete fallacy and it is one that is actually built on protecting property and encouraging and moving gentrification. It’s something that is being advanced by folks who otherwise are perceived as or claim to be progressives but in fact are advancing a model of policing that’s about pushing low-income Black people, people who are deemed to signify disorder out of public spaces and that’s done in racially gendered ways. For instance, anywhere women of color are hanging out and perceived to be engaged in prostitution becomes a target and it becomes a place where women are arrested without evidence. Right? For loitering for the purposes of prostitution.

Who do you know, how do you know what someone’s purpose is when they’re standing somewhere? You don’t. You just act on profiles and stereotypes but also on who you’re trying to get out of public space, and that is what broken windows policing looks like through a racially gendered lens. It’s certainly manifesting in downtown Baltimore when police officers target areas where women of color, trans women of color, non-trans women of color are either trying to survive by trading sex or hanging out, being themselves but then being arrested under the assumption that that’s what they’re doing.

ANDREA RITCHIE: I think you can look to the example of organizers here in Baltimore like Power Inside and Black Women Rising who are coming together, telling stories to each other as as start but then as Mary Hooks was just saying on this panel, telling stories is the beginning, not the end. The purpose is not just to share our pain, but to build from it, to build our resistance. In Black Women Rising, they’re focusing on healing from state violence, from school push-out and on building resistance and resilience among young Black women to all forms of state violence. Power Inside, they’re doing the same with adult women who were criminalized and experiencing all kinds of violence on the street, to come together, to build power, to fight back, to engage processes like the Consent Decree but also to engage day to day policing and violence that’s happening kind of under the radar.

A cop watcher gave an interview to a Fox reporter, then it became evidence against him

The pandemic is reshaping our sex lives. Is cybersex our future?