Sudan’s President Carries Out Coup to Defuse Movement Against Him

Prof. Khalid Ahmed says that what looks like a military coup against Sudan's president Omar al-Bashir is actually of the president's own making, to defuse the growing movement and ICC indictment against him

Prof. Khalid Ahmed says that what looks like a military coup against Sudan's president Omar al-Bashir is actually of the president's own making, to defuse the growing movement and ICC indictment against him 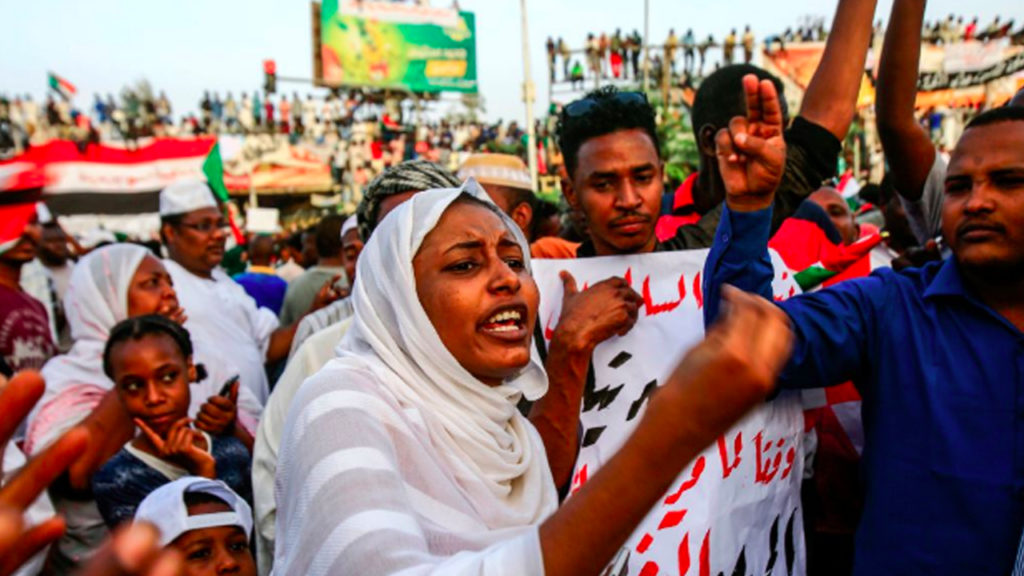 The president of Sudan, Omar al-Bashir, has apparently been put under arrest after five months of relentless protests throughout the country. He was president of Sudan for 26 years. The military council that arrested him initially announced that it plans to keep the country under military rule for the next two years. It then retracted that statement as protests continue to disrupt the country. Although Omar al-Bashir is wanted for war crimes by the International Criminal Court, the military council announced that it will not extradite Omar al-Bashir. The reasons for the protest actually had to do with a tripling of the cost of bread in December 2018, as well as the spiraling cost of living in other areas.

The protests resounded around the world largely because women took a prominent role in the leading and organizing of the protests, especially Alaa Salah, whose photo speaking to the crowd of protesters went viral. Over 60 protesters have been killed since then, and Sudan’s security forces have arrested hundreds, until the military intervened and took the side of the protesters. Once that happened, news of Omar al-Bashir’s fall was carried by word of mouth across the country.

Joining me now to discuss the situation in Sudan is Khalid Ahmed. He teaches political science at the African Studies Department in the University of Toronto and worked in the United Nations in Sudan in 2007. Thanks for joining us today, Professor Ahmed.

KHALID AHMED: Thank you for having me.

GREG WILPERT: So President Omar al-Bashir originally had the support of the military and led this military in the war that ended up splitting the country and the forming of the country of South Sudan. Now, what made the military suddenly switch sides and turn against Bashir?

KHALID AHMED: This is a good question. But what really is happening on the ground is that Bashir decided to plan this coup, so it’s a staged coup in reality. What happened is that he appointed Ibn Auf as the minister of defense and vice president just a few weeks ago, and then slowly started to plan his way out of power without being extradited to the ICC. And what people underground are saying, members of the opposition, is that the regime is still intact. What happened is that they replaced al-Bashir with his vice president in order to maintain its grip on power for a longer period of time under the guise of change. But it’s not really any change, according to those underground. It doesn’t meet the aspirations of the Sudanese people, this new announcement of the military council.

GREG WILPERT: I see. Now, why do you think that the military council refused to extradite al-Bashir? You basically suggested why, but are they also perhaps afraid that he will testify against those who committed war crimes during the Civil War?

KHALID AHMED: That’s a good question. But most people are not aware of the fact that even Auf himself is wanted by the United States for atrocities against people in Darfur. So he himself is actually wanted for questioning because he was the head of the military intelligence during the war in Darfur, and he is actually accused of atrocities. So why would he turn al-Bashir over to the ICC when he himself would end up there as well? So we have to realize something, that the leaders of the military are not in sync with those lower-ranking officers and mid-range and junior officers in the army who are actually in support of the people and the demonstrations that are taking place in front of the headquarters of the military. So there is a kind of crack within the army, and that is taking place slowly and broiling. And it’s going to be interesting to see what it’s going to lead to in the next couple of days.

GREG WILPERT: Now, why have the protesters focused on President Omar al-Bashir, the individual, and just how responsible was he actually for the economic conditions that made life so difficult for the Sudanese people?

KHALID AHMED: He is fully responsible. He’s been the president of the Sudan for almost 30 years, so economic, political, social mismanagement of the country’s resources has been under his leadership. So people are definitely holding him accountable for his actions, or inactions. And it’s natural that the people don’t just want al-Bashir to go, but they want the entire regime and the NCP, National Congress Party, to be dissolved and for a new transitional, really a transitional government to take over. And that’s why people are still demonstrating out on the street, insisting that they don’t need any more army officers in charge of the country. But what they’re looking for and what they were fighting for in the last four months since December 14 is a transitional government, a civilian transitional government that would plan ahead and prepare the country for true, genuine democracy.

GREG WILPERT: So what do you think is actually going to happen now? Will this happen, this civilian transition? Is this a public uprising, a revolution that will bring about democratic revolutions, or is it a military coup and should we expect a general to take over the presidency for the extended period? And also, do we need to worry that Sudan’s civil war will restart now?

KHALID AHMED: It’s actually both. It’s a coup and a revolution at the same time. What do I mean by that? The NCP, National Congress Party, staged this coup, but it’s just ostensibly appearing as if it’s a change, a genuine change, in the hope that it would satisfy the demonstrators and to end the sit-in that is taking place in front of the army headquarters. But on the other hand, people on the street are continuing their demonstration. And it is a revolution that they’re demanding more than what has been given to them right now. It’s not enough to have military officers, it’s not good for them to have two years with a military council in charge.

They want genuine change, democratic change, and transitional change that is led by civilians, especially those who were leading the demonstrations, and an end to the regime, not just al-Bashir, but even Ibn Auf himself, the leader of the Sudan right now, needs to go and needs to be held accountable for what he’s done in Darfur. So the change is not comprehensive. People see it as just a trick trip by the leading party to try to calm people down. People are genuinely determined to continue in the hope that whatever they were calling for from the beginning, which is to change the regime, is going to happen and will happen soon.

GREG WILPERT: And what about the possibility of renewed civil war and the peace agreement? What’s going to happen with that?

KHALID AHMED: The renewed civil war, I don’t see it as a large possibility. But what I see is that we might have some violence, especially if the military council that is in charge now decides to violently end the sit-in. If it does that, I think junior officers and mid-level officers in the army will definitely stand by the people, and that might lead to some sort of civil strife and violence. But to what level, to what extent, we don’t know. But at the moment, it’s very delicate. And as we speak right now, people are–there are some rumors now saying that even Ibn Auf himself is facing some severe resistance from the army, and even some rumors go as far as saying that he has been detained. What is going to happen in the next couple days is unclear, but a civil war, I don’t think so.

GREG WILPERT: OK. Well, we’re going to leave it there for now, but we’ll definitely come back to you as the situation develops. Thanks, Professor Ahmed, for having joined us today.

KHALID AHMED: You’re welcome, thank you for having me.

Israeli Arms Trade in South Sudan Was Disguised as “Agriculture”