A new PERI study says that there is a causal relationship between the rise of the right-wing Hindu nationalist BJP party in India and the rise of hate crimes targeted against minorities, especially against Muslims. Prof. Deepankar Basu discusses the research.

A new PERI study says that there is a causal relationship between the rise of the right-wing Hindu nationalist BJP party in India and the rise of hate crimes targeted against minorities, especially against Muslims. Prof. Deepankar Basu discusses the research. 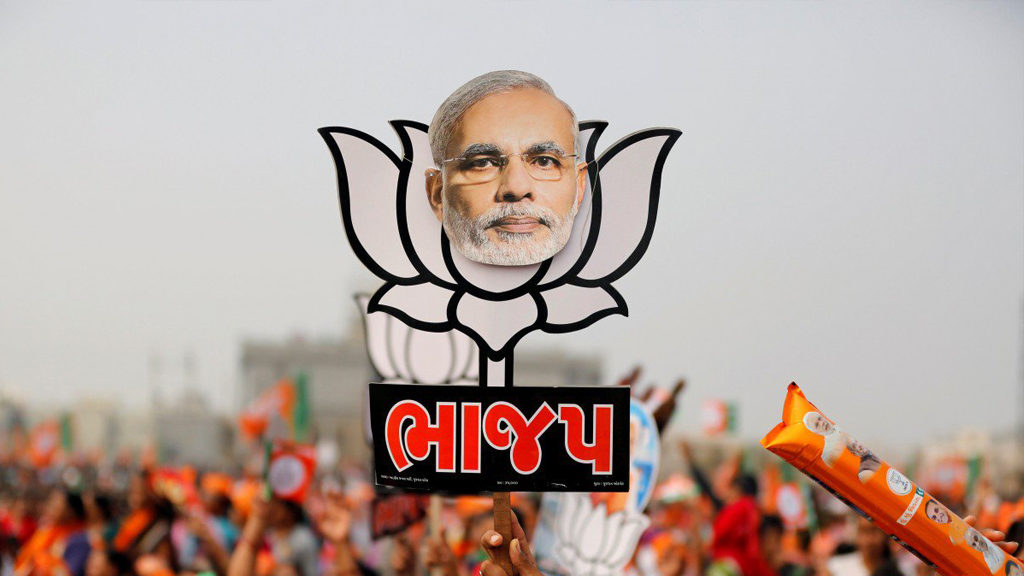 Is there a connection between the rise in hate crimes against minority groups in India, especially against Muslims, and the rise of the Hindu nationalist BJP Party? A new report by the Political Economy Research Institute, PERI, says that there is a causal relationship between the two. The report is titled “Egalitarian Politics and the Hate Crimes Against Religious Minorities in India: 2009 to 2018.” The party known as the BJP became the governing party of India in 2014, and has won a series of electoral victories since then. And then, in May of this year, BJP with Narendra Modi as its leader, won the national elections of India again, increasing the share of its vote by six points to 37%.

Joining me now to discuss the relationship between right wing hate crimes in India and the success of the BJP Party is the PERI report’s author, Deepankar Basu. He is Professor of Economics at the University of Massachusetts-Amherst. Thanks for being here today, Deepankar.

DEEPANKAR BASU: So political scientists and historians have studied the political stream that BJP represents for a long time and have pointed out that one of their key political ideas is demonizing Muslims. And since there is an increase in hate crimes right from 2014 when BJP emerged as the majority party in the national parliament, I started studying this issue. And what I did is I looked at different states and arranged them according to whether BJP was a dominant political player there or not. And I find a very striking increase in hate crimes against minority, especially Muslims, in those states where BJP’s dominant electorally.

Now, the mechanism that might be driving this is probably twofold. One, BJP is part of a larger group of organizations which espouse Hindu political ideology and some of those organizations directly go into the streets attacking Muslims, organizing lynch mobs, especially related to issues of cow protection. The other mechanism might be that the electoral outcome in 2014 is understood by a wide section of people who already harbor anti-Muslim sentiments as an understanding that sentiment is widely shared and that might suddenly lead to unraveling of decent behavior and leading to verbal and physical assaults.

GREG WILPERT: Now, of course, your study looked at it on a level of the electoral districts basically. I’m wondering though on a national level, the BJP is certainly promoting a certain ideology and Hindu nationalist rhetoric. But at the same time on the national level, there’s also policies such as the gradual annexation of Kashmir, the revocation of citizenship from Muslims in Assam Province, and also a military buildup in the name of nationalism. Now, what would you say is more influential for the kinds of hate crimes that you’ve observed, the activities that are taking place, so to speak, rhetorically and on a local level or these kinds of national policies? Are they having an effect as well?

DEEPANKAR BASU: I think both of these are part of the same political strength that BJP presents and revoking Article 370 has been a thing that BJP has espoused for a long time. And the kind of majoritarian nationalism that it represents is getting reflected in demonizing Muslims and demonizing immigrants and militarism. So I think all of these are having effect and building on each other.

GREG WILPERT: Now, your methodology of difference in difference, which basically looks at the kind of the different effects in different levels and tries to compare them and draw correlations. Now that can indeed show that the kind of hate crime that increases is a type that’s focused on minority groups, and particularly against Muslims. However, how do you know that the causal relationship goes in the direction that you described? That is, that the BJP wins elections and makes hate crimes more socially acceptable and that it’s not the other way around. That perhaps that there’s a perhaps an intervening factor that racism increases, and so do hate crimes and so do the votes for BJP?

DEEPANKAR BASU: That’s a very good question. This is an observational study, so I do have all these kinds of factors, but the difference in difference methodology tries to control for these confounding factors. So what I do is I take up all the states and divide them into two groups. The first group of states are what I call BJP states where BJP’s strong and then I have the other group of states, which I call the non-BJP states. Now, then I look at the difference in the incidents of hate crimes in both groups of states and then take the difference between the two. So what I am doing is, in essence, I am using the states where BJP is not dominant as the counterfactual.

And if there is an increase in BJP states compared to the increase in these other states, then I am more or less reasonably certain that the effect is coming from BJPs victory. Now, I also do a lot of robustness checks. For instance, I do the same methodology using the year 2012 when there was no election versus 2014 when there was an election and I don’t see any effect when I use 2012. I do other kinds of robustness checks and all of those together kind of suggest that there is a strong possibility of this causal link, but as you suggested, an observational study always is open to that criticism.

GREG WILPERT: And finally, does your study give you any ideas as to how these trends might be broken? In other words, how the attacks against Muslim minorities and hate crimes might actually be decreased? I mean, of course one could say, “Well, people shouldn’t vote for the BJP,” but is there some other kind of a conclusion that you can draw from the study that points in a direction of what perhaps people on the ground could do about these kinds of trends?

DEEPANKAR BASU: I think two issues have emerged during my study. One is legislative changes, so some States which are not ruled by BJP, which are right now ruled by either congress or some other parties, have passed legislation at the state level to take stringent action against this kind of violence against minorities. So that is certainly something which might happen and should happen. In fact, the Supreme Court of India in 2018 asked the central government to take this issue seriously and bring in some national legislation. The other thing is that progressive forces in society need to take this seriously and take this up and mobilize around it. So legal changes, which can be enforced, along with progressive social changes on the ground would be the way to challenge and tackle this.

GREG WILPERT: Sorry, can you just be a little bit more specific? What do you mean by legal changes, exactly? What kinds of changes?

DEEPANKAR BASU: So the state of Rajasthan, Madhya Pradesh and West Bengal have passed laws which make – which identify these events where more violence has taken place against minorities and specifically, police action and other legal action are taken vis-a-vis those new laws, which have been passed. So the understanding is that the existing laws are not strong enough or not implemented well enough to tackle this problem and therefore we required new laws. And some state governments have been proactive in bringing about these new laws and strengthening their implementation, so that is what I mean.

GREG WILPERT: Okay. Well, we’re going to leave it there. I was speaking to Deepankar Basu, Professor of Economics at UMass-Amherst. Thanks again, Deepankar, for having joined us today.

Deepankar Basu is an Assistant Professor of Economics at the College of Social and Behavioral Sciences at the University of Massachusetts – Amherst.