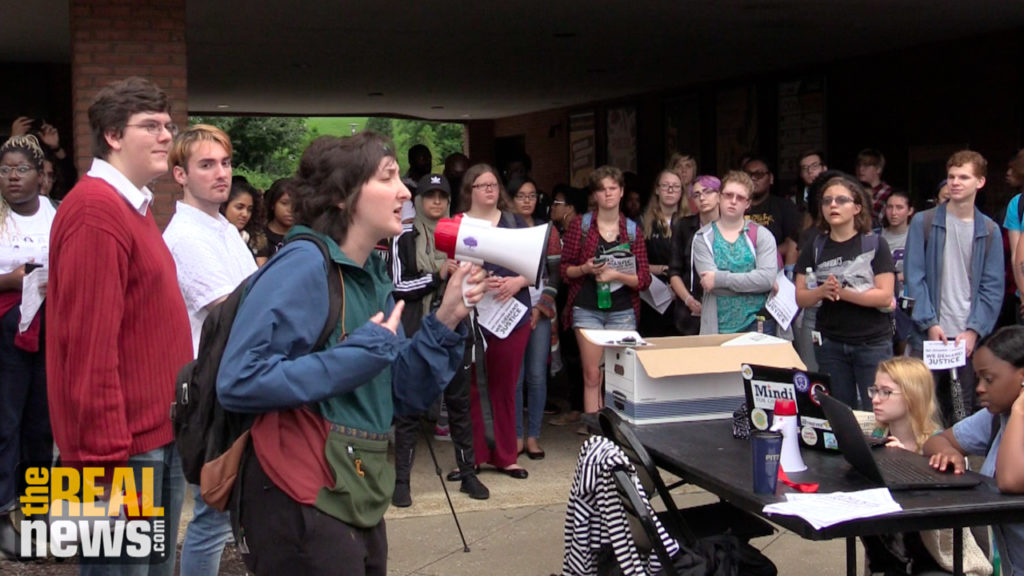 STUDENT: And actively work to create a safe, healthy, and inclusive environment for survivors.

TAYA GRAHAM: They made demands, and they marched.

Students at the University of Maryland Baltimore County gathered to call attention to a system they say downplays sexual assault.

ERIN SCHOENEMAN: On December 18, 2010, I was personally sexually assaulted by two students at the University of Maryland College Park. I never reported that crime. I knew that if I tried that it would be retraumatizing in every step of the way.

HALEY OWENS: It goes in spirit of protecting and protection of those who commit these crimes. And so you know, the hot topic right now seems to be athletes. I’m not saying that all athletes are perpetrators, or playing a part in sexual assault. However, I know that perhaps a large amount of, perhaps, maybe- I can only theorize that perhaps a large amount of what contributes to the insufficient ruling on these cases is the fact that the school is protecting the students who perhaps bring in money.

TAYA GRAHAM: Or hold them accountable when they violate the laws.

The protest was prompted by a recently filed federal lawsuit which alleges a pattern of downplaying sexual assault cases by both the university and the county police. One student was raped in a dormitory bathroom and woke up bleeding. And the university police chief convinced her not to bring her allegations to county law enforcement. Her case was eventually dismissed by the university. The lawsuit also cites allegations of a student who was drugged and raped by members of the UMBC baseball team. The suit alleges, despite evidence of rape, Baltimore County State’s Attorney Scott Shellenberger declined to charge. It also alleges he tried to discourage the victims from coming forward by sending detectives to her home and threatening her with arrest. It’s a culture of silencing survivors that one of the organizers says she has experienced firsthand.

ERIN SCHOENEMAN: So I never told anyone in any official capacity. I almost never even told the friends of those two people, because I was worried that they wouldn’t believe me, and would target me for harassment for trying to smear their character.

TAYA GRAHAM: Which is why students prioritized a list of demands, including firing the UMBC Police Chief Paul Dillon.

SPEAKER: We demand Paul Dillon, UMBC chief of police, be immediately removed from his position in the university.

TAYA GRAHAM: And the suspension of other officials, pending an investigation.

SPEAKER: For returning massive and preventable delays in investigations we demand Erick Kim, Title IX investigator, be immediately suspended pending investigation from his position in the university.

TAYA GRAHAM: We asked the administration for comment, and they sent us this written statement.

“We’re proud of our students for speaking truth to power. While the university has taken many initiatives that go beyond what is legally required to respond to and support students in relation to sexual misconduct, it is clear that there is more work we need to do.”.

But the students vowed to press on; to press on for real change in a system they say must start to take them seriously.

This is Taya Graham and Stephen Janis, reporting for The Real News Network in Baltimore City, Maryland.