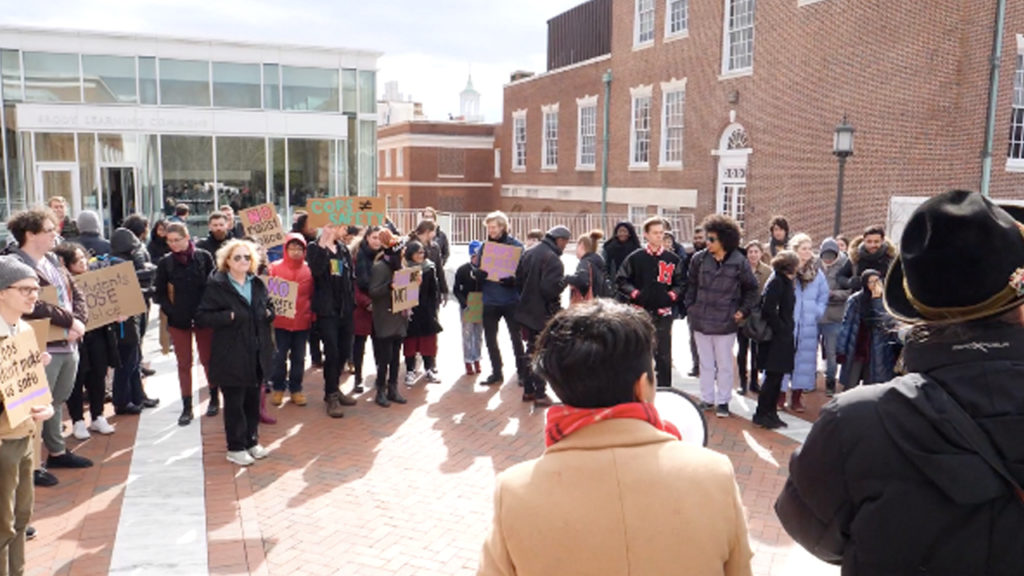 TEXT CARD: Dozens of students and faculty rallied against proposed legislation- SB 793-  that would create an armed, private police force for Johns Hopkins.

Hopkins says it’s necessary to fight rising crime, they’ve worked to address the community’s concerns and that they have broad support.
But some remain concerned a private police force will endanger people of color and that the best way forward is to address underlying issues like poverty and lack of opportunity.

CHISOM OKEREKE, PRESIDENT OF HOPKINS’ BLACK STUDENT UNION: And it’s been truly wild for me to see this institution teach me how to reduce crime and improve situations for people living in low-income communities while at the same time being the same institution that’s pushing this damaging and destructive legislation.

PROTESTERS: No justice, no peace! No private police! [Repeated]

CHISOM OKEREKE, PRESIDENT OF HOPKINS’ BLACK STUDENT UNION: Being a black student here, not just being a part of the Black Student Union, I’ve constantly seen my peers, my friends, myself being targeted by the already present law enforcement. And it is on this campus. And it’s very terrifying for us to think that these minor inconveniences of being assumed no good people on this campus–it’s scary to think that that could be weaponized and be turned into a matter of life and death.

I would push back on the idea that policing is the only way. I think that a lot of the funding that would be going to this police force, whether it’s private or not, could go to a lot of other sources. I don’t think that the bill needs to include youth funding. I think that you could find youth separately without having to tie it into a bill that would do a lot of damage to the community.