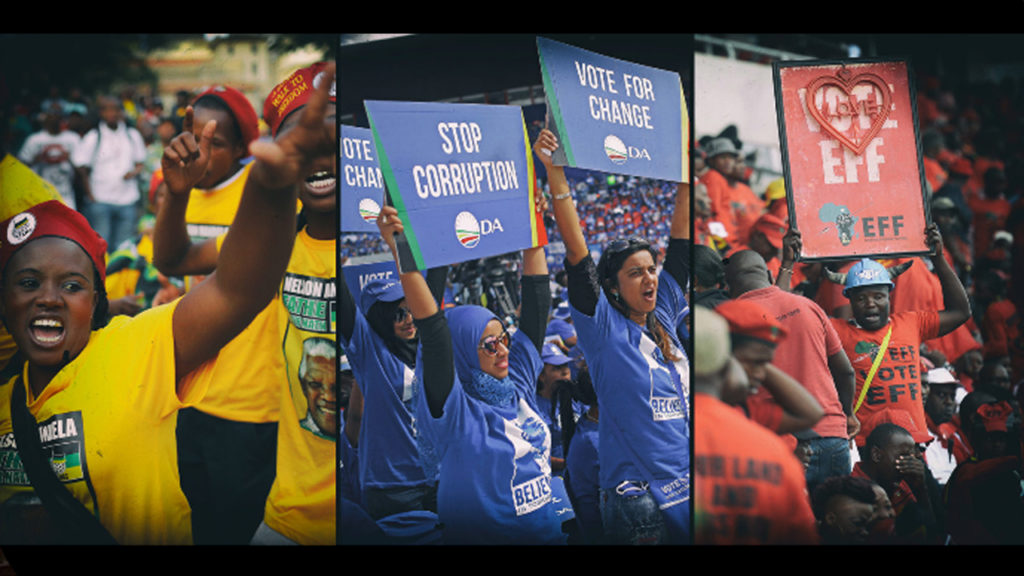 SHARMINI PERIES It’s The Real News Network. I’m Sharmini Peries coming to you from Baltimore. Twenty-five years after the fall of the apartheid and with 25 years of ANC rule in South Africa, people are headed to the polls to elect yet another president. The South African National Congress as Nelson Mandela’s party has led South Africa during this post-apartheid era. And yet, the people are still struggling with economic inequality, political corruption, and issues of slow land reform and environmental strife. The last president of South Africa, Jacob Zuma, he was embroiled in a slew of corruption, then was ousted after nine years. And then, Cyril Ramaphosa took over in 2018 promising to deal with corruption, but no charges were laid. Meshack Ncongwane, who works on a dairy farm in Estina, he expressed his outrage at Ramaphosa’s inaction.

MESHACK NCONGWANE We see corruption being investigated, but no one’s being arrested. If it was me, I would have long been in jail. That’s the painful part.

SHARMINI PERIES On to address these developments and, of course, the elections that are underway, is Professor Rasigan Maharajh of the Center for Research on Evaluation Science and Technology at Stellenbosch University. Thanks for joining me, Rasigan.

RASIGAN MAHARAJH Thank you very much, Sharmini. And thanks for the opportunity to engage.

SHARMINI PERIES All right, Rasigan. Let’s start with Cyril Ramaphosa here. Now, Cyril Ramaphosa accused Jacob Zuma of being in the pocket of the Gupta family, billionaires who wielded extensive influence in South Africa. So, that is perhaps true, but which capital groups are supporting Cyril Ramaphosa in the run-up to this election?

RASIGAN MAHARAJH I think, absolutely. I mean, it’s a very important question. If we understand the type of allegations being made about corruption being a form of capture of the state, then different interests of capital capture the state different ways. And maybe the complaints about the previous president of the country reflected the limitations of that form of capture by that fraction of capital itself. In other words, maybe that form of capital did not allow capitalism, or capitalists as a whole, to gain much advantage. And as a consequence, maybe a new power from within and amongst another fraction, should arise. One thing is very clear in terms of the analysis we have available to us and that’s the very strong interest by finance capital in the current president of the African National Congress.

SHARMINI PERIES Rasigan, let’s analyze the fact that ANC has been in power for a quarter of a century now and usually, political analysts and historians will say, when a new kind of movement emerges, as the ANC, it takes 25 years to be able to really implement the goals and objectives of a party like the ANC had when it took power. Do you think they have delivered on that?

RASIGAN MAHARAJH Well, if you don’t mind, Sharmini, I think this analogy about the ANC newly coming to power needs to be understood in the context of it as a national liberation movement. And in that context, the ANC has been in existence for over a century, working with and amongst people. So I question this idea that the ANC only came to power in 1994. The end of apartheid allowed the ANC to occupy significant elements of state power. But amongst the people, the ANC and the other national liberation movement, as well as the mass democratic movement, did hold power. That power, unfortunately, did not have the capacity to implement the type of changes that became available after the democratic breakthrough in 1994.

That’s an important feature as well, in terms of the type of caricature now of corruption, of state capture. South Africa has been captured since it was colonized. It was colonized by the Dutch East India Company. It wasn’t colonized by a flag of another country being put into the ground. It was corporate state capture from its 360-some odd years ago. And subsequently, the 25 years that we add on may be a small amount of time, but I would suggest that we need to have maybe higher expectations from a national liberation movement to effect over a century’s worth of struggle into real development. And there, we may consider that it has failed in being able to deliver.

SHARMINI PERIES Very important contextualization there. Rasigan, tell us about the current situation in terms of the different political parties that are running. What is your prognosis? Will the ANC succeed again?

RASIGAN MAHARAJH So I think in terms of— we’ve got over 48 parties contesting this election both at the national and provincial level. That’s a huge amount of parties. The consequence of it is that we have lots of very narrow interests being reflected through the party electoral system. All of this, however, may be serving to further shift away from a more direct form of representation, something which I think not only myself but maybe 57.7 million South Africans recognize as the possibilities of a people’s democracy. And to that extent, not to be, sort of, passed through the lens of a political party itself. When we look at a lot of the corruption allegations, these speak to individuals within a party structure. They also speak to government officials also within structures itself. For me, this form of arbitrage allows for and affords the possibility of corruption. So unless that gap is reduced, we very well may be heading towards a system that you are more familiar with in Baltimore, which is the best democracy that money can buy, as opposed to a democracy based on the people and having a direct mandate for the type of actions required.

RASIGAN MAHARAJH I think most definitely. Already in terms of an indication from the Independent Electoral Commission, we have a sense that not all young people— especially those that now have the ability to vote based on reaching a legal age and those in the early 20s. So that demographic, by and large, seems to be avoiding the election. That’s a very shocking phenomenon. A lot of the challenges that we face, as we are now realizing, will be intergenerational in nature. And as a consequence, having such a grouping represented in power-making is important. So the failure of the political parties that exist, all 48 of them, to actually address young people and the next generation, maybe speaks to the bankruptcy of this type of political settlement. So amongst those parties that you had asked, of course, the huge variety that exists amongst them, speak to very narrow interests as well.

A huge number of religious-type organizations, by and large, all of them conform within the notion of a liberal democracy. A few of the parties have pronounced themselves in favor of more radical options, including the Socialist Workers Revolutionary Party, which is a new party contesting the elections for the first time. I think this year’s results will certainly give, especially the more established institutional forms, at least a challenge to reconsider their own position and maybe encourage them to get closer to people. Already, this is identified as a political gaffe, the type of distance that exists between political parties and communities. And these gaffes are actually increasingly becoming chasms that the political mechanism is incapable of bridging.

SHARMINI PERIES All right. Rasigan, I’m going to leave it there for today, but I would very much like for you to come back after the elections once we have some sense of the results. And perhaps, we can look at the results and assess where the people are at and how the next phase of leadership and dynamics with the community and, of course, the young people and the population evolves in the next quarter century. I thank you so much for joining us today, Rasigan, and look forward to having you back.

RASIGAN MAHARAJH Thank you very much for the opportunity.

SHARMINI PERIES You’re most welcome and thank you for joining us here on The Real News Network.

September 6, 2019
Sign Up for Our Newsletter
Help Us Make Real News!