The trial against 12 Catalan independence leaders exposes the extent to which Spain's status as a coherent nation-state is being questioned. The governing socialist party is now feeling the consequences when it lost a budget vote because of the Catalan issue, says Sebastiaan Faber

The trial against 12 Catalan independence leaders exposes the extent to which Spain's status as a coherent nation-state is being questioned. The governing socialist party is now feeling the consequences when it lost a budget vote because of the Catalan issue, says Sebastiaan Faber 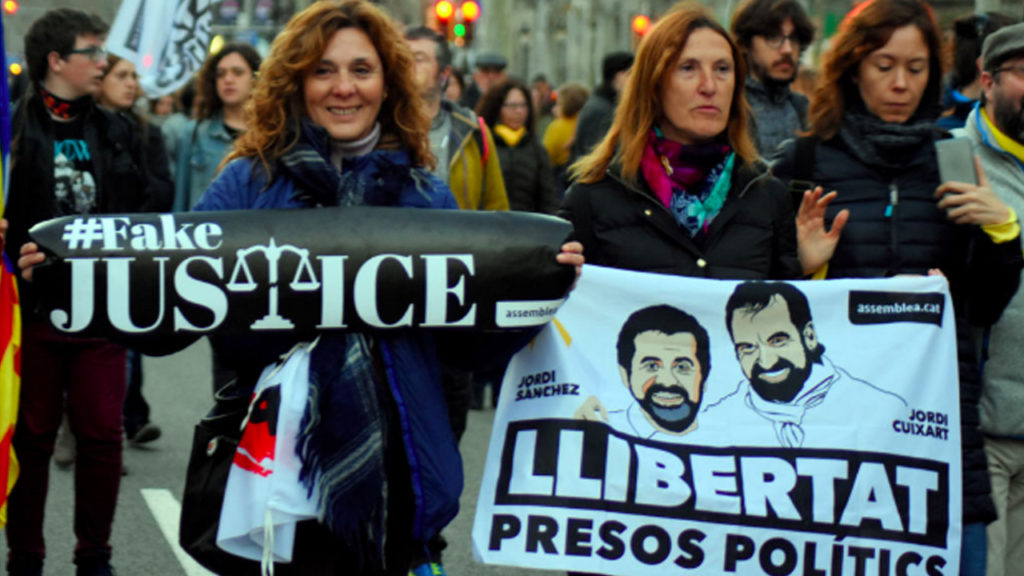 GREG WILPERT: It’s The Real News Network and I’m Greg Wilpert coming to you from Baltimore.

Spain’s government, under Prime Minister Pedro Sanchez, is on the verge of falling. Last Friday, Sanchez called for new elections to be held on April 29th after his government failed to get enough votes to pass the Government’s budget. The failed vote is linked to the Catalan independence issue in that Catalonian independence party supported Sanchez’s election as prime minister, but retracted that support when Sanchez refused to agree to a new referendum on Catalan independence. Meanwhile, twelve Catalan independence leaders are on trial in Madrid on charges of sedition and rebellion, partly for having organized an independence vote and then declaring independence in October 2017. Here’s what the former leader of the Catalan regional assembly, Jordi Sanchez, had to say during the trial.

Joining me now from Oberlin, Ohio to analyze the situation in Spain, is Sebastiaan Faber. Sebastiaan is Professor of Hispanic Studies at Oberlin College and author of the book Memory Battles of the Spanish Civil War. Welcome back to The Real News Network, Sebastiaan.

SEBASTIAAN FABER: Great to be back.

GREG WILPERT: So let’s start with the trial of the twelve Catalan independence leaders. They face up to twenty five years in prison if convicted, perhaps even more. The trial itself has been mired in controversy over its location, over the bail conditions, and other issues. The defendants call themselves, as we just, heard political prisoners. What is your sense of this trial and does this look like a fair trial to you, and what do you think is at stake here?

SEBASTIAAN FABER: My own personal opinion is that the trial should have never occurred. Spain has a big challenge, which is what to do with the fact that the large portion of the people living in the northeastern region of Catalonia feel they don’t belong to Spain and they would prefer to be independent or to have more autonomy. And this political class in Madrid has consistently refused to acknowledge the political nature of the problem and to seek political solutions. So the fact that now the aftermath of the referendum in October of 17 turned into a trial is a signal of a political failure.

And to make things worse, there is no way in which this trial is going to bring anybody closer to a long term solution to the territorial problem that Spain faces, which has to do with the fact that it’s long, for centuries, been a state made up of several nations who have their own languages, their own histories, their own cultures. And Spain, as a state, has to find a way for those cultures and nations to live together within the larger structure, which is currently not quite federal. And until it does, it’s got to face this problem. The trial has been underway for a little over a week now. We’ve had the accused interrogated, there’s going to be about six hundred witnesses over the next three months being heard.

And it’s an interesting situation, because what’s at stake here is not only whether the politicians and civil society activists that are on trial did what the prosecution said they did, which is that they committed rebellion and sedition and misuse of funds. What’s at stake also is what the meaning was about the referendum in early October, and then later that same month, October ’17, the Declaration of Independence had followed. Because if the prosecutor is right, then the Declaration of Independence was a real declaration of independence, a real intent to separate from Spain. But what many of the accused maintain though, have maintained in the past week or so, is that they never meant the declaration to be a real declaration of independence. They emphasize its symbolic nature.

So it’s interesting to think back to that month, October, that super excited, weird, tense month in October in 2017, when declarations were made and some people in Catalonia believed that the independence was really being proclaimed. And now, it seems that the politicians, most of them, kind of were aware that it was more of a symbolic gesture than anything else. So that’s a real interesting tension within the Catalan perception of what’s going on in addition to the judicial aspect.

GREG WILPERT: So I made a connection earlier in the introduction between the Catalan independence issue and the government’s failure to secure enough votes to pass the budget. Talk to us about the ways in which the Sanchez government’s fate is connected to the Catalan issue.

SEBASTIAAN FABER: So Sanchez became prime minister not through an election, but after a vote of no confidence in the Parliament that ended the premiership of Mariano Rajoy. And he won that vote of no confidence thanks to the support not only of his own party, but also among members of the Catalan nationalist parties who agreed at that point that Rajoy of the center right Popular Party had to go. But the Sanchez government since then has been a minority government. Its own party holds a minority of seats and dependent to pass any kind of legislation on the support of that same coalition that brought in the vote of no confidence.

Now, when it came to vote about on the national budget a couple of weeks ago, the Catalan nationalist parties basically put conditions. They said, “If you want us to vote for your budget, for your budget to pass, we want more concessions toward what we are looking for, which is an acknowledgment on the part of Madrid that Catalonia has the right to self-determination, and therefore that some form of actual legal, approved referendum is possible in the future. Sanchez appeared to be willing to move in that direction, and at one point mentioned the notion that they could sit down at the negotiation table in the presence of some form of mediator, relator in Spanish, somebody to keep the minutes and hold people accountable.

Now, that simple idea that the two parties, Catalonia and Spain, would sit at the table with a mediator, turned out to be so scandalous for the Spanish right that they went out and called Sanchez a traitor and a felon and an absolute disgrace. Sanchez, at that point, got scared and withdrew that idea of the negotiation, and instead decided to call snap elections. So the Catalan parties have been key in ending the Sanchez government, which many of the left criticized as well. Because the Sanchez government, for all its effects, was pushing a progressive agenda in Spain, and that agenda has now been cut short as we await the elections in April. And it may well be that on April 28, a right coalition wins the majority of votes in parliament and we switch back to a right wing government, ending all these measures that the Sanchez government had just been putting in place.

GREG WILPERT: Now, last December there was a right wing anti-immigrant political party that emerged called Vox in the region of Andalusia, where they won eleven percent of the vote. Now, Andalusia used to be a stronghold of Pedro Sanchez’s Socialist Party, but according to some polls, support for Vox seems to be rising. What’s your take about the reasons for this rise and what do you expect to happen in the April election?

SEBASTIAAN FABER: I think there’s a couple of different reasons for the rise. One is a simple disenchantment of voters who would normally vote to the right, disenchantment with the other options that are available, which is the longstanding centrist PP party, the Partido Popular, and the Citizens Party. So disenchanted with those options, they’re moving further to the right to Vox. What Vox offers is kind of your standard radical red European menu. They are strongly anti-immigrant, they are homophobic, they are very skeptical of any measures meant to protect women from domestic violence. They are, in the Spanish context, extremely opposed to any kind of concessions for Catalonia, and in fact have been calling for a long time now for the illegalization of Catalan pro-independence parties.

They in fact have an actual role in the trial that we just talked about. They are one of the three accusing parties. There is the prosecutor, the solicitor general, and Vox, who appears at the trial as a typical Spanish role, which is the people’s accuser. And whereas the prosecutor and the solicitor general are demanding exaggerated sentences of between fifteen and twenty-five years, Vox is demanding up to seventy years in prison for some of these Catalan leaders. So they’re really pushing these anti-Catalan, pro-Spanish, nationalist, flag-waving, jingoist rhetoric. And that’s resonating in Spain, not in Catalonia itself as much as in the rest of Spain, where there’s real anxiety about the possibility of Catalonia breaking away.

Now, what you see happening now in the Spanish political landscape is that the other main two right wing parties, the Partido Popular and the Citizens Party, are seeing Vox siphoning away their votes and they’re therefore moving further to the right as well to try to prevent that from happening. As a result, they now are also calling for strong measures against Catalonia. They are also defending the idea that these Catalan parties could be made illegal, and they are advocating to revoke the autonomy of Catalonia. So you see a real polarization going on as a result of the rise of Vox. And the left, meanwhile, is really in a bind, and has been in a bind ever since the Catalan question exploded in Spain. Because as long as that discussion is mainly about Catalonia, about Spain’s territorial issues, all the points at which the left can appeal to a larger electorate, which have to do with social equality, with raising the minimum wage, all those things are put on the back burner. So it’s a real complicated situation for Spain today for the left.

GREG WILPERT: OK. Well, I’m sure we’re going to get back to you again as we get closer to the election to delve deeper into these issues, but we’re going to have to leave it there for now. I was speaking to Sebastiaan Faber, Professor of Hispanic Studies at Oberlin College. Thanks again, Sebastiaan, for having joined us today.

Dimitri Lascaris Reporting From Spain Aboard The Freedom Flotilla