Can the Spain-Catalan Crisis Be Resolved?

The only way to diffuse the situation would be for Madrid and Catalonia to sit down and discuss a serious reform of Spain's constitution--but current Spanish leadership is unlikely to take that step, says Oberlin professor Sebastian Faber

The only way to diffuse the situation would be for Madrid and Catalonia to sit down and discuss a serious reform of Spain's constitution--but current Spanish leadership is unlikely to take that step, says Oberlin professor Sebastian Faber 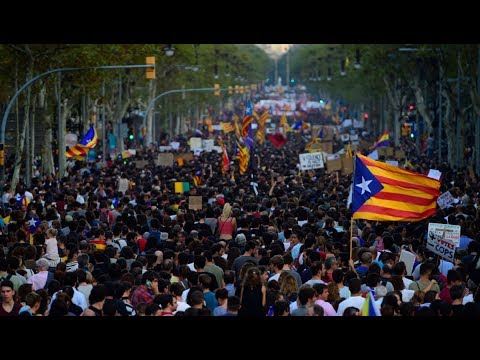 AARON MATÉ: It’s The Real News. I’m Aaron Maté. Tens of thousands are protesting across Catalonia today following the Spanish crackdown on its referendum. Spanish forces injured hundreds who took part in Catalonia’s vote for independence, which authorities say received over 90% support. Today in Barcelona, a massive crowd marched on the Spanish National Police regional headquarters. The Spanish government says the referendum was illegal and their standoff with Catalan leaders is said to be Spain’s worst constitutional crisis since the country became a democracy four decades ago.

S. FABER: Today, there’s been a general strike declared all over Catalonia with a high percentage of following. Barely any public transportation ran, roads were blocked, freeways were blocked. And the streets of the cities, especially Barcelona, filled with people either marching in silence or singing songs and kind of performing what has been so far the collective attitude of the Catalans as they are fighting for their right to self-determination. That performance has been a performance of peaceful protest, civilized dialogue, democratic, the performance of democratic aspirations, really.

The response from the central Spanish state has been, for the past number of years but especially in the last weeks and especially last Sunday, has been harsh and inflexible and repressive. On Sunday, we all saw how people trying to vote were met with visored riot police with the billy clubs, nightsticks hitting old people, young people, anybody who tried to express their democratic right to vote.

The defense that the Spanish state has given of its crackdown on what the Catalans are trying to do is that it’s merely following the law. The Constitution of 1978 in Spain does not allow for referendums on self-determination. It declares that Spain as a nation is indivisible, and it limits the recognition of Spain’s multinational makeup really to the creation of 17 autonomous regions.

Catalonia has tried to redefine its statute of autonomy, but in 2010, that redefined statute was declared null and void by the country’s Constitutional Court, by Spanish Constitutional Court. Ever since then, so for the past seven years, the push for self-determination and the push for independence has been stronger and stronger. And everything indicates that the state’s response, the harsh response from the Spanish state has only managed to increase the feeling that lives among many people in Catalonia, which is that they don’t fit, they don’t belong to Spain, Spain doesn’t want them.

Just an hour ago, the Spanish king came extraordinarily on television in a six- or seven-minute speech to declare his position. Some people hoped that he would sound a more conciliatory tone, a more sympathetic tone, perhaps that he would mention that the police violence of last Sunday was regrettable, but none of that happened. He did not mention the violence. He didn’t even use the word “dialogue” at all. He talked about concordia, and he talked about Catalonia being a part of Spain, but he also, in very harsh terms, condemned the politicians in Catalonia who have been organizing the referendum and pushing for independence. He said they were breaking Spain apart and they were breaking the law. It sounded to me like the king was preparing the ground for an even heavier intervention from the Spanish state, which could easily take the shape of revoking Catalonia’s autonomy.

AARON MATÉ: What do you think was behind the decision to crackdown so harshly on Sunday’s vote? What was the calculation there?

The only justification, the only political motivation that I can think of for this harsh crackdown on the voters on Sunday could’ve been to please that part of the Spanish constituency, the conservative voting block that supports the ruling party in Spain and that part of that block that really wants to see the Catalans punished for daring to even suggest that they don’t belong in Spain or daring to even threaten with the breakup of a unified Spanish nation.

AARON MATÉ: What are the key issues that undergird the Catalan desire of independence? And is there anything that the Spanish government could do in theory, in your view, that could bridge those differences, bridge that divide?

S. FABER: Yeah, I think that the main underlying issue has to do with the fact that an increasing number of people in Catalonia don’t feel that Spain has anything to offer them. What that means for people is different according to the people. It’s important to understand that the push for self-determination or for independence has the support in Catalonia both of the conservative Catholic right and of some of the radical left.

Understandably, the right has a different image of what an independent Catalonia might be able to do than the radical left has. For the left, it’s an opportunity to found a progressive, independent republic that will have an easier time implementing more just policies, better labor conditions, more democracy than the Spanish state has. For the Catalan right, the Catalan right is not anti-capitalist at all. It wants to have a modern European nation, and it feels probably that it can fare better economically when it’s independent from Spain than it does now.

There’s also some reason to believe that what’s currently the PDeCAT, their right-wing conservative Catalan party, which is pushing for independence, that it might not really actually want independence. That all it’s going for is a more advantageous relationship with Spain in economic terms and that the threat with independence has all this time really been an empty threat meant to force Madrid to the negotiation table. Yesterday, the current president of Catalonia, Carles Puigdemont, set as much. He said, “I will not yet declare independence. I’m inviting Madrid to sit down and dialogue without any preconditions.”

To go to the second part of your question, I think that kind of dialogue would also be really the only way to defuse the situation. I think the only way to do that would be for Madrid and Catalonia to sit down and to contemplate the possibility of a serious reform of Spain’s Constitution, which clearly is not working for Catalonia anymore.

However, I don’t see the current Spanish government, the current Spanish leadership, Mariano Rajoy, the current prime minister, I don’t see them capable psychologically or ideologically of taking that step. And I think today’s speech by the king, which fully endorsed the position that the Spanish government has taken to heart, which is a zero-tolerance approach and come down with the full force of the law as harshly as possible on anybody who tries to go against what’s formally in the Constitution, I think the speech by the king has further pushed that possibility of a negotiated solution farther into the distance even.

AARON MATÉ: The way you describe it, it sounds like the struggle for independence has very different meanings to the different political factions inside Catalonia. What about inside Spain on the left? Podemos arose just a few years ago against austerity, challenging right-wing policies. How do they feel about the Catalan independence movement?

S. FABER: Their official position for a long time has been that they support the Catalan right to self-determination, so they are in favor of an actual referendum held with the approval of the government in Madrid, a binding referendum. At the same time, they have said that they sincerely hope that should that referendum happen, that a majority of Catalans will decide to remain in Spain.

They have also said that they fully understand that Catalonia doesn’t want to belong to a Spain ruled by the current government but that they could become part of an alternative government, a progressive government in which Catalonia would feel much more at home and wouldn’t have the same issues that they have currently. That’s been the official line.

AARON MATÉ: Do you think that there’s a credible case for the Spanish left to make to the Catalan left to convince them to want to stay?

S. FABER: That all depends on their actual options for government. If the Catalan left believes that Podemos has a real chance of entering the government, that might be the case. On the other hand, there’s real suspicion and distrust in Catalonia of any politician from Madrid, however left they might be.

AARON MATÉ: In the final minute we have, the key issues that you’re looking at going forward.

S. FABER: The keys issues I think are, is this going to further escalate? Like I said, it sounded me the king was making sort of preemptive excuses for a further crackdown. The Spanish Constitution allows for the autonomy of an autonomous region to be revoked if the autonomy poses a serious threat to the country’s interests. There’s also an article in the Constitution that charges the army with protecting the territorial integrity of the nation.

So far, some people have said before we know it, tanks will be rolling down the streets of Barcelona. I’ve always thought that was a little bit exaggerated; now I’m not so sure. I’m really worried that this will further escalate, and I hope that the politicians that have been calling for dialogue and for a diffusion of the tension among them, Ada Colau, the mayor or Barcelona, I really hope that they’ll have enough sway to force the different parties to the negotiation table.