The genesis of a perfect storm of collapse explained by political economist, Robert Wade

The genesis of a perfect storm of collapse explained by political economist, Robert Wade 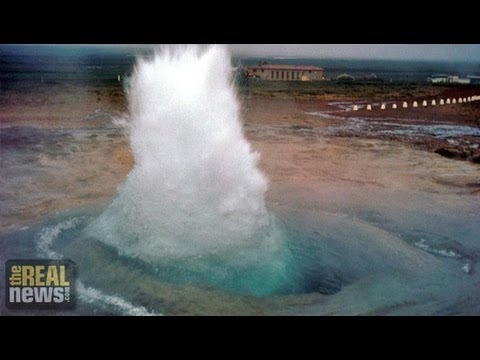 Here to talk to us about Iceland’s boom, bust, and capital outflow management is Robert Wade, political economist at the London School of Economics. Professor Wade was awarded, among many distinctions, the 2008 Leontief Prize in Economics for advancing the frontiers of economic thought.

The dramatic stories of hot money capital flows and boom-bust experiences of countries like Brazil, South Korea, India, and Iceland was taken up by experts from around the world, including Robert Wade, this at the United Nations, Geneva, where we met Professor Wade to get his take on the experience of Iceland. Our conversation opens with Iceland of the ’90s.

PROF. ROBERT WADE, LONDON SCHOOL OF ECONOMICS: Through the 1990s, the government of Iceland undertook radical liberalizations, following in the spirit, as they understood it, of Ronald Reagan and Margaret Thatcher, partly with the idea of making Iceland into an international financial center in the middle of the Atlantic, conveniently halfway between Europe and North America.

And so by the late 1990s, the early 2000s, this project moved to the point where they privatized two of the state-owned banks that previously had been entirely domestically oriented and created a third private bank from the merger of a number of small regional banks within Iceland. So by the early 2000s, Iceland had three privately owned banks, which then set about expanding on a very rapid scale their international operations by borrowing heavily on the interbank market.

Three banks that had previously been entirely domestically oriented with very little experience of international capital markets began to borrow very aggressively on the interbank capital market with the implicit understanding that they had government guarantees. So they were able to borrow a lot of money quite cheaply. And they used this borrowed money to buy up assets, to buy up high street shops in Britain and Scandinavia, for example, and many other kinds of assets on an enormous scale, to the point where, by about 2007, this tiny economy, which has a population, remember, of only just over 300,000 people, had three banks which were included in the world’s 300 biggest banks.

And one of the great problems was that these banks had only very small experience of dealing in international financial markets. And, also, Iceland had really not been able to develop a culture of financial regulation which would be appropriate to banks of this enormous size.

FRIES: Despite the disproportionate and rapid rise of Iceland’s three main banks, and as critics elsewhere called into question the sustainability of the Icelandic boom, Iceland was unfazed. We ask our guest how he explains this.

WADE: On the surface, this was a very, very successful experiment, because Iceland’s growth, economic growth increased. These banks, as they generated giant profits from restructuring all these assets that they were buying with borrowed money, and then having to borrow yet more money, these banks also redistributed these profits back into Iceland, so that incomes, wages, and so on went up in Iceland. And on top of that, there was a general encouragement for everybody–for households, for firms–everybody who could was expected to borrow in order to further increase their consumption.

What happened was a great atmosphere of euphoria set in in Iceland, as though Iceland had discovered a whole new sort of recipe for fast and equitable economic growth. And the Chamber of Commerce even went to the point of telling its members–and this is a quotation–we should stop comparing ourselves with the other Nordics; after, all in many ways we are superior to them; the implication being we should take the virile capitalism of the United States and Britain as our model.

And so basically what happened was that all the mechanisms that were meant to exercise prudential regulation of the financial system were basically bypassed, or they were established, but as sort of shop window operations that were really not expected to do much regulating. There was an assumption that the banks could basically regulate themselves, that this should be left to the free market. And so that is how Iceland headed towards the cliff, as we now know, with very few cautionary voices being raised to try and rein in this continuing increase in borrowing.

FRIES: Our guest provides greater detail on Iceland’s Chamber of Commerce and how it responded to warnings that the banks should be reined in.

WADE: First of all I have to say that the IMF comes out of the whole the Iceland saga, if not smelling of roses, then certainly smelling much better than the IMF came out of, for example, the East Asia crisis in the late 1990s. And through the middle 2000s–2005, 2006, 2007–the IMF reports on Iceland, called the Article IV Consultations, did ring the alarm bells privately to government, and, also, watered-down versions of their reports were released to the public. So the IMF was ringing the alarm bells.

But in response to this what the government did was to hire in, first of all, Frederic Mishkin–when I say the government, I really mean the Chamber of Commerce, the Icelandic Chamber of Commerce–hired in Frederick Mishkin to essentially put his name on a report written by an Icelandic economist, testifying to the stability of the Icelandic banking system. He was paid, according to his tax return, $135,000 for putting his name on that report. That was in 2006. Those two people, Mishkin and his Iceland coauthor, had access to just the same data as the IMF, but they drew very different conclusions, namely, that the Icelandic banking system was quite stable.

And then, in the following year, basically the same was done. The Chamber of Commerce hired in Richard Portes to put his name on a report mostly written by another Icelandic economist, for which Richard Portes was paid 58,000 pounds.

And so the government then took these two reports by the famous experts, Mishkin and Portes, and said, well, we will go with the reports of the experts and we’ll kind of more or less ignore what the IMF was saying. And so this was an example of how very clear warnings that the banks should be reined in were just ignored by the government.

FRIES: In English translation, as reported by a commission appointed by the Icelandic Parliament, Iceland’s prime minister, in March 2008, said the following in his speech at the annual meeting of the Central Bank of Iceland:

“Negative reports on the Icelandic economy, as published in several foreign newspapers recently, come as a surprise to us. . . . All indicators are good that the situation in the economy is by and large strong and the banks are sound. This has been thoroughly confirmed by well-known scientists such as Frederic Mishkin, who has become a governor of the U.S. Federal Reserve, and Richard Portes, a well-known academic expert in this field.”

WADE: So Iceland hurtled towards the precipice with the label of the Nordic Tiger that could do no wrong. And what then happened was that very soon after the Lehman Brothers collapse in mid September 2008, these giant Icelandic banks that depended critically on borrowing on the interbank market, they began to wobble. And then they simply collapsed, very quickly, in early October. And when they collapsed, so there was a perfect storm, that is, a perfect storm of collapse of the banks, of the credits, the whole credit system. The currency, the krona collapsed. The stock market collapsed. House prices began to collapse. There was a general implosion and a very quick implosion in the whole economy, to the point that by 2010 Iceland had suffered the biggest fall in gross domestic product of all the 33 member countries of the OECD. That is, Iceland had a bigger fall than Greece or New Zealand, which had the second biggest falls. And so this was an extraordinarily vicious implosion of what had just a few weeks before been hailed as the “Nordic Tigers”.

FRIES ON CAMERA We’ll pick up with that concluding thought in our next segment. Please join us for part two of our conversation with Robert Wade.

Our thanks to Robert Wade. And thank you for joining us on The Real News Network.

Professor Robert H. Wade is professor of political economy at the London School of Economics. He was awarded the Leontief Prize for Advancing the Frontiers of Economic Thought in 2008. His book Governing the Market (Princeton University Press,1990, 2004) won the American Political Science Association award for Best Book in Political Economy 1992. In 2008…