Economist: “There’s Absolutely Nothing Resembling A Debt Crisis In The US”

Interests payments on US debt are at an historic low.

Interests payments on US debt are at an historic low. 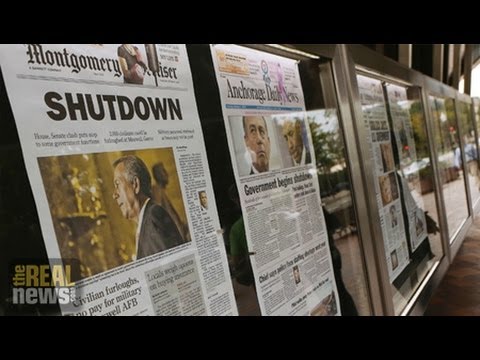 JESSICA DESVARIEUX, TRNN PRODUCER: Welcome to The Real News Network. I’m Jessica Desvarieux in Baltimore. And welcome to this edition of The Pollin Report.

Now joining us is Bob Pollin. He is the codirector of the Political Economy Research Institute at the University of Massachusetts Amherst.

PROF. ROBERT POLLIN, CODIRECTOR, PERI: Thank you very much for having me, Jessica.

DESVARIEUX: So, Bob, we have a government shutdown now on Capitol Hill. There’s yet another congressional battle looming ahead, the debt ceiling. Can you just give our viewers sort of a reminder of what exactly is the debt ceiling and what is going to happen to the U.S. Treasury if we don’t raise the debt ceiling on October 17?

And what happens is: instead of the debt ceiling getting raised as it would be normally to cover all the government’s obligations, the Republicans have used the debt ceiling and the budget more generally as a way to fight the Democrats and to prevent government spending on programs that have already been passed. The programs have been passed. For example, Obamacare has been passed into law, has been approved by the Supreme Court. But the Republicans are trying to stop these things on the premise that the American people hate government, and so that they want to destroy the government, they want to eviscerate the welfare state.

So the debt-ceiling debate is not really just about the debt ceiling. It is about the government providing means of well-being for people in the society. And the Republicans are trying to stop that.

DESVARIEUX: Is there anything resembling a debt crisis in the U.S.?

DESVARIEUX: So if there is no debt crisis, why are we therefore having this debate? Who benefits?

POLLIN: Well, as I said, the debt-crisis debate is really not about the debt crisis per se; it’s about the Republicans’ efforts to destroy the minimal welfare state that we already have and the minimal benefits that are already provided the government. Some of these are extremely important, though inadequate: Medicare, yes; Medicaid, yes; food support for women, infants, and children, the WIC program. My colleague here at it PERI, Jenna Allard, was just telling me about her dad, who is an energy efficiency expert for the government GAO, the Government Accountability Office. So increasing energy efficiency by the government is now going to stop, at least for the time of the government shutdown. And that’s what the Republicans want. So that means that we are unable to save money and we’re unable to do things that reduce greenhouse gas emissions because of this shutdown. This is what the Republicans really want. It’s not really about the debt ceiling.

DESVARIEUX: Okay. Let’s talk about that paper that your institution, PERI, published, a study earlier this year debunking the seminal paper of austerity movement written by Harvard economists Reinhart and Rogoff. Their thesis essentially was: once a country hits a certain level of debt to GDP, the country’s economic growth will slow down. You and your colleagues proved that many of their calculations were actually false. So why did this austerity continue? Why do we continue to have these debates? I know I’ve asked you this earlier, but why haven’t the policies reflected what you and your colleagues have disproved?

POLLIN: Well, you know, let’s not let facts get in the way too much. It’s true. It’s only months ago that the Republican budget, their official budget, drafted by Congressman Ryan, the vice presidential candidate with Romney, on the issue of the government debt and debt ceiling and so forth cited exactly one academic study in behalf of their argument that we had to lower the government debt. The one academic study is the one you just referred to, Jessica, by professors Reinhart and Rogoff. And that very famous, influential study purported to show that when government debt levels exceeded 90 percent of the economy’s GDP, then economic growth would collapse. So even if we want all these useful programs like energy efficiency programs or Head Start Program or Medicare, if we have to borrow beyond 90 percent of GDP, it is going to be self-defeating, according to Reinhardt and Rogoff, because economic growth collapses.

The only trouble is, as you said, their evidence didn’t hold up. When we scrutinized their evidence, it turned out it does not support the claims made in the study. Therefore one would think, if evidence had anything to do with policy formation, that Congressman Ryan would acknowledge that he no longer has evidence to support the claim that the U.S. government is facing a debt crisis. Of course he hasn’t done that. It just happens to be a fact that the major foundation undergirding this notion of the need for austerity has been taken away from them.

DESVARIEUX: Okay. Well, thank you so much for joining us, Bob.

POLLIN: Thank you very much for having me on.