Robert Johnson: We are unlikely to hear tough questions from Senate Banking Committee as JP Morgan is their biggest campaign contributor

Robert Johnson: We are unlikely to hear tough questions from Senate Banking Committee as JP Morgan is their biggest campaign contributor 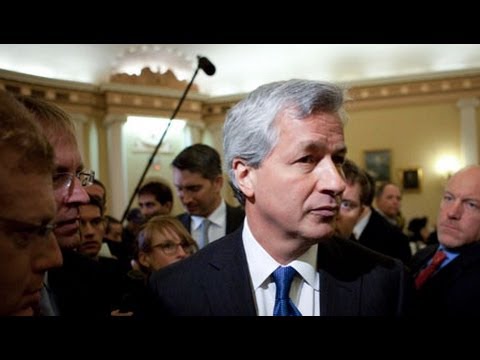 Wednesday morning in Washington, Jamie Dimon, the CEO of JPMorgan, will be testifying at the Senate Banking Committee, trying to explain what happened with $2 billion of losses in derivatives trading, and, I expect, will tell the committee it’s not a systemic risk, even though it wasn’t very good, and he’ll apologize and say it won’t happen again. Well, what is the real story here? And what would you say if you were on the banking committee? What questions would you ask?

Well, we’re going to ask Rob Johnson what he would ask if he was on the banking committee. Rob Johnson now joins us from New York. Rob is a senior fellow and director of the Global Finance Project for Financial Reform at the Roosevelt Institute in New York. Thanks for joining us again, Rob.

JOHNSON: Alright. First of all, if you’re on the banking committee, Jamie Dimon’s probably the greatest source of fundraising support and lobbying support for all banking activities. So with a little asterisk on this whole thing, it’s not clear to me that any senators are going to ask him real tough questions that are going to rely on him for fundraising. And that’s part of why this system’s so darn broken.

JAY: Yeah. Well, that’s why we’re asking you, I think.

Okay. Well, if you are on the committee and you’re asking earnest questions, the first thing you would ask him is why, when he claims what he’s doing is hedging other risk, that he actually lost money on the hedge. What financial traders would say is that the hedge became a wedge. In other words, it didn’t mitigate other risk; it amplified the risk on the balance sheet. And therefore isn’t the Volcker rule, which separates all of this proprietary trading from other activities that (what you might say) society guarantees with the Fed and deposit insurance, isn’t the Volcker rule absolutely necessary? Second questionâ€”.

JAY: Well, hang on. So how do you think he’ll answer that?

JOHNSON: I think what he’ll sayâ€”and arithmetically he’s not inaccurateâ€”that with a $360 billion portfolio, to lose three to five million dollars is not tantamount to a financial calamity.

JAY: I thought it was $2 billion that they lost.

JOHNSON: I’m sorry. Did I say million? It’s three to five billion dollars on a $360 billion dollar portfolio. So you’re essentially talking about something under 2 percent loss. And he would say that in the normal fluctuations in a market, that is not the cause for concern or meltdown, that JPMorgan has adequate capitals, and that markets are inherently risky and this is not a statistical outlier, this is not a black swan.

JAY: So what’s wrong with that argument of his?

JOHNSON: Well, what I would say is what’s wrong with that argument of his is whether guaranteed deposits and a guaranteed system, through access to the Fed discount window, should be subsidizing any of these kind of activities. Regardless of whether we what you might call identified a loss when it was only 2 percent, what’s to be sure that the next time somebody isn’t going to lose 14 percent or 20 percent or more than all their capital like Lehman Brothers did in 2008?

At some level, the other question that must be asked is: what was productive for society in the credit allocation process about that particular action? ‘Cause it looked like what they did was they used the fact that JPMorgan has been considered a safe house, a place where flight to quality went to, they used that strength of their balance sheet, coupled with the government guarantees, to go out and do a little reckless speculation, which in this morning’s Wall Street Journal indicates people had been fighting over within the management of JPMorgan for a couple of years.

JAY: So what would your next question be?

JOHNSON: My next question would be whyâ€”I alluded to it earlierâ€”what does any of this activity have anything to do with making the economy function better, restoring the value or the stability of the housing market, or any of those types of what you might call real functions of financial intermediation?

JAY: And how would he answer that?

JOHNSON: He would answer that they are spreading risk, they are allocating risk to its place of greatest return, probably in aâ€”how do you say?â€”throwing a bone to his stockholders. They’re maximizing return. But if my question were strictly about the social consequences, he would say that the allocation of risk to its greatest use is a socially productive function. And I think that presumes there’s a certain rationality in these markets and there’s a certain correspondence between financial return and social value thatâ€”how do I say?â€”at the very least it’s questionable.

JAY: Before I ask you what your next question is, I got a question for you. If Jamie Dimon didn’t know this was going on, which is, if I understand it correctly, what he claims, if there are apparently, according to a story in McClatchy, at least 100 regulators operating in JPMorgan and they didn’t know this was happening, then doesn’t it suggest that they actually don’t know what’s happening? I mean, when Dimon says this was only $2 billion, it’s not systemic, I mean, how does he know?

JOHNSON: Well, I would say a number of things. First of all, these banks may be too complex to manage. And it may be the case that he didn’t know because the scope and scale and breadth of what they knew is not knowable in terms of its implications for the overall balance sheet risk, which is quite a dangerous notion.

The second thingâ€”and I’ll cite Nouriel Roubini in the movie Inside Job. He said the reason they didn’t look: because if they looked, they might have found the problem. And I think that applies to a lot of the regulators in the era since Greenspan, who have been coached that what they want to do is be friendly with the banks and elicit cooperation, rather than what you might call a tough public servant protecting the social treasury.

And I don’t understand how this society, without stronger supervision, stronger regulation, stronger enforcement of existing regulation, can continue to have these large, unwieldy financial institutions without facing what you might call periodic calamity. And I justâ€”I’m always amazed that we do not have, in the aftermath of 2008, a very strong social consensus that, as Richard Posner at University of Chicago said, the banking system is a nerve center, it’s not like everything else, it needs to be thoroughly regulated.

JOHNSON: I would be tempted to ask him why he spent so much money pulling together the entire lobbying force that used to work for Freddie Mac and Fannie Mae (my understanding is that JPMorgan hired almost all of those people for the Doddâ€“Frank episode and beyond), and whether his actions in those days were in the public interest, or whether that lobbying force was designed to thwart the public interest and expose us to the kind of risk that’s being addressed or examined in this hearing on this particular Wednesday.

JAY: And how would he answer that?

JOHNSON: I think he would say that, to represent his stockholders and maximize the profits of the company, that government affairs is a frontier that banks and financial institutions have to manage, and that the ability to get very skillful people to work in that endeavor, what you might call veterans of financial lobbying and influence, was a good investment for the firm. Now, whether he’ll say that in a congressional hearing, I don’t know. I think you might say that at a stockholder’s meeting. And he might well be right. What they call rent-seekingâ€”lobbying and government services manipulationâ€”appears to be a very, very profitable activity for the big banks.

JAY: Some people are suggesting we’ve reached a point where the politics and the balance of power is such that you can’t effectively regulate anymore, Congress simply will not pass anything that’s real, and that given what you’ve said, that these banks aren’t like anything else, that because they’re a nerve center, that the only way around this nowâ€”and, again, the politics would be, I guess, extremely difficultâ€”but it’s to try to win American people over to the idea that there needs to be some kind of public banking to be a nerve center that isn’t subject to all of this. And if these guys want to go gamble, then go gamble with a clear idea that you’re not getting any public money if you lose. And we have some kind of public infrastructure as the alternative, so you can’t sink the whole economy. Is there something to that argument?

JOHNSON: Well, there’s something to it, but there’s something that also is difficult about it. A large bank that’s too big to fail can bring a large portion of the real economy down with it, what economists call externalities. In other words, as a byproduct or side effect of their activities, they can spill over and do great harm to the real economy. Lehman Brothers did not have a big retail deposit base or anything like that, but they were so intertwined with the entire world financial system that when they went bust it sent everybody reeling, cutting off trade credit, you know, the metaphoric equivalent of putting money under the mattress, and that froze up the international credit allocation system.

So putting in a public entity (which in many ways the Fed is) that could expand the money supply, or it could buy mortgage debt like the Fed did, or could allocate credit to industrial loans, is the substitute for that banking system when it goes into dysfunction. That will mitigate the problem.

But large-scale financial institutions that are heavily intertwined, that have portfolios that consist of many of the same assets, when one gets in jeopardy and starts to liquidate, it sends a propagating disturbance to the entire system. So having a public entity alone isn’t sufficient to stabilize the system. The bigâ€”the Godzillas, as Andrew Sheng calls them, also have to be reined in for the real economy to be stable and free from those adverse spillovers.

JAY: Thanks for joining us, Rob.