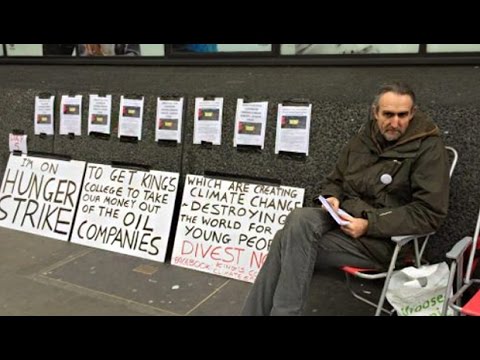 Activism pushing divestment from fossil fuels that are the main drivers of global warming and climate change has seen a dramatic upsurge over the last few years. As a result, almost 700 institutions across the globe representing funds worth over $5 trillion have made some form of divestment commitment. This is according to the campaigning group Fossil Free UK. In the United Kingdom, there are currently divestment campaigns targeting pretty much everything from local councils, and churches, and faith groups, as well as church organizations, health organizations, charities, pension funds, banks, and of course, universities.

Our next guest is someone who achieved the very remarkable feat of getting his university in London to agree to divest from all fossil fuels by the year 2022. How did he accomplish this when others had failed previously? In part, by participating in an eight-week-long campaign of direct actions that culminated in a 14-day hunger strike. Joining us now is that very person, Roger Hallam. Roger is a PhD student at King’s College at the University of London, and he joins us today from the UK. Roger, we appreciate you being here.

KIM BROWN: Roger, let’s start off with you explaining what exactly it is that you have been able to achieve at King’s College and how exactly you were able to achieve it.

ROGER HALLAM: Okay. Last summer, I went to some other students at King’s College where I’m at to inquire about helping to achieve their objective which was to get King’s College University to divest from fossil fuels. They’d engaged in about four years of campaigning doing sort of the conventional stuff like petitions, demonstrations, sitting on committees. They’d made some sort of symbolic progress, but they weren’t anywhere near achieving their objective of getting a statutory commitment, as it were, to divest from fossil fuels.

I do research in how to design radical campaigns. I suggested a more effective way of achieving the objective would be to engage in an escalation of direct action. I helped to design the escalation involving students spray chalking the walls at universities and putting various things on the walls like flowers, statements, and as you say, that culminated in hunger strike like an over eight-week stay totally changed that policy.

KIM BROWN: What is it that led you to decide that this was a path worth taking? Because after all, a 14-day hunger strike is a very serious course of action.

So, that’s the hypothesis as it were and what happened that King’s College was an example of what can achieved if you engage in escalation of direct action.

KIM BROWN: So, since your success at King’s College, there have been other similar actions directed at the university college in London, for example. What other actions are you aware of and how successful have they been?

ROGER HALLAM: Well yeah, since we were successful there have been other actions involving spray chalk, this is like washable chalk which is put on the walls of institutions. That’s happened at maybe five or six different places, I’m not sure entirely, it’s just spreading as a tactic. It’s meeting with some success, but I think what needs to be emphasized is that change in this situation isn’t brought about without creating quite a lot of drama and that involves irreducible amount of sacrifice on behalf of the campaigners. If they’re not prepared to engage in that risk and sacrifice they work with, and they would say, “Ah, they will.” I’m saying this is a social sciences law, I’m not allowed tell anyone what they should or shouldn’t do, I’m just saying that it’s not going to happen unless people are prepared to be suspended, lose their jobs, and go ultimately on a hunger strike or some related activity because this is what brings people to the table, is when there’s a lot of drama going on and the costs to the university or the institution have risen to a state where they cannot avoid negotiating.

KIM BROWN: So Roger, as I understand it, this is not a course of action that you arbitrarily decided to embark upon, you are involved with a network of activists and academics. Can you tell us about the joint efforts that you and these other organizations are trying to achieve, not only in the UK, but in other places around the world as well?

ROGER HALLAM: Yeah. Basically, we’re trying to look at what it takes, basically, to bring about radical change. Obviously, this is important from a climate change situation. We’re questioning the strategies and tactics that have dominated progressive or radical left for the last generation. We’re widening on that, looking at strategies and tactics which should have been used in local south and more historically in the Western world, such as the Civil Rights Movement states, for instance. We’re trying to introduce a wider range of tactics to activism rather than what’s happened before.

The main literature on the subject, I suppose, is pointing to mass civil disobedience as the main mechanism through which peaceful change is brought about when you’ve got a big block in the political system. Of course, with climate change, unfortunately, there’s a massive amount of naivety, you might even put literacy on the part of the political forces of the moment, that they think they can solve this problem without [inaudible 00:07:40] into confrontation, which is about as unrealistic as saying that climate change isn’t going to happen. There’s no way we’re going to get the change that we need now without the sort of escalation of action.

KIM BROWN: Indeed, we have been joined today with Roger Hallam, he is a PhD student at King’s College at the University of London. Roger successfully embarked upon a two-week campaign in order to encourage his school to divest from fossil fuels by the year 2022, and he was successful in that. Roger, we want to congratulate you and thank you so much for being here with us.

ROGER HALLAM: That’s fine. Thank you very much. Thanks.