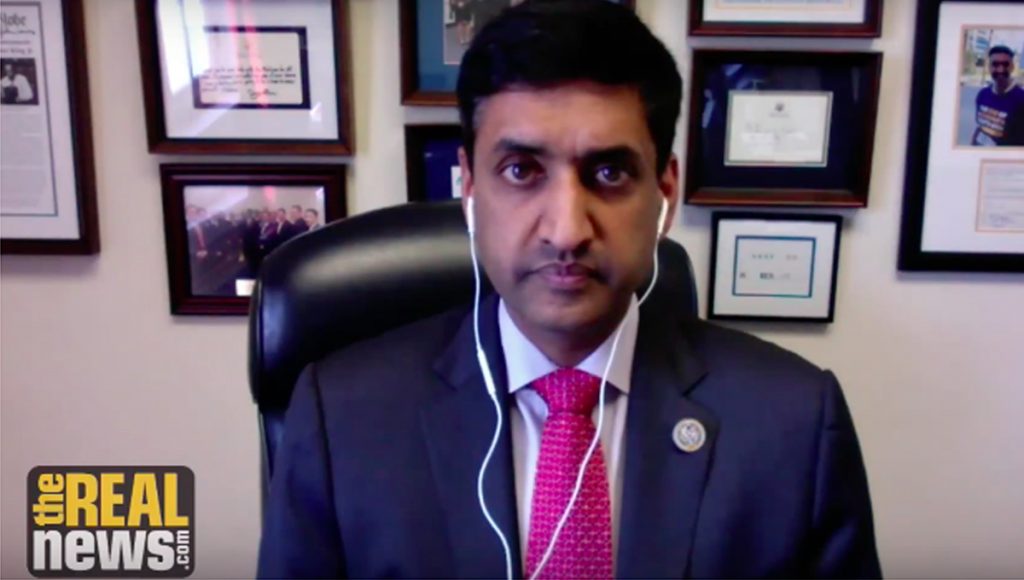 AARON MATE: It’s The Real News, I’m Aaron Mate, continuing with Congress member Ro Khanna. He is vice chair of the Congressional Progressive Caucus. Congressman Ro Khanna, I want to begin by asking your response to this ruling that came down from the Supreme Court today, 5-4 decision upholding President Trump’s Muslim ban.

RO KHANNA: Well, it’s very disappointing and a clear violation of our constitutional principles. It’s as if we’re going back in time. The ban is clearly targeting people based on religion. Just because North Korea has been added as a pretext does not mitigate the fact that this is targeting predominantly countries with large, with Muslim populations. And if this ban were in place we may never have had someone like Steve Jobs, the founder of Apple. I mean, Steve Jobs had a Syrian father who came to this country and met Steve Jobs’ mother at the University of Wisconsin. Under this ban, Steve Jobs’ father wouldn’t have ever been allowed to come to the United States.

AARON MATE: And this comes just after we’ve had this national outcry over the separation of immigrant children from their parents- or I shouldn’t just say immigrants, I should say asylum seeking children from their parents at the border between U.S. and Mexico. Trump has now reversed that, but now he’s trying to revert to a policy of basically mass family incarceration. Your thoughts on the on this issue that has been consuming the country now for many days?

RO KHANNA: Well, it’s not just a moral wrong. It’s not just something that appeals to our conscience. We have to get back to first principles, and that is that immigration is good for America. Even Ronald Reagan realized this, where he said that America in some sense represents the human spirit of people around the world, and you can come from any place in the world and be American.

This is what makes us innovative, that people from around the world come, they bring new ideas. That’s Why we have such an entrepreneurial culture. It’s why so much of Silicon Valley startups are founded by immigrant entrepreneurs. It’s why we have done so well in exporting around the world. So, what we have to understand is the president isn’t just hurting our moral sensibilities, he is hurting the very ingredients that are going to allow America to compete in the 21st century.

AARON MATE: So, finally, let me ask you about issues of division, right now inside the Democratic Party, because these two issues around the Muslim ban and the separation of families at the border, we’ve seen Democrats come out with a strong, unified objection to that. But you’ve been among the members of Congress who have set yourself apart from party leaders when it comes to other areas, especially foreign policy.

RO KHANNA: I think you’re very correct to point out, on social issues, the Democratic Party has been unified. And people like Senator Schumer have spoken out very strongly against the Muslim ban or against separating families. I would argue, even on economic issues, the Democratic Party is finding its voice, with Senator Schumer saying we need to care more about the middle class and the working class.

Now, I think we have to be bolder. But there’s a recognition that the Democratic Party needs to be moving in a direction of populism. But when it comes to foreign policy, I don’t think we have offered a clear alternative. Let me give you three very specific examples.

Second, there’s no reason why Senator Schumer should have supported moving the embassy to Jerusalem. I mean, the United States should not stand for that kind of hawkish approach to the Middle East. And finally, on North Korea, we shouldn’t be parroting John Bolton in saying that we need denuclearization or no talks. Rather, we should take the approach of people like Bill Perry, who have said actually that we did make progress, that this was basically a tentative “freeze-freeze’ agreement:

“We are freezing our decapitation exercises, they are freezing testing on nuclear weapons or perhaps the development of intercontinental ballistic missiles, that means we in our homeland will be more safe.”

Now, we have to continue the dialogue, we have to verify this. But we should applaud engagement, not have unrealistic demands that are going to set us up for failure, which has been the policy over the last forty years, fifty years. There’s been no real progress on North Korea. Bill Clinton made some progress, and that was because he engaged.

A final point, though in a broader framework, I think the Democrats need to be for a restraint for military interventions, restraint of our hard power and maximizing our soft power. More export of our values, our technology, our art, our music, investment in the fight against climate change and global poverty, on education. And we need to provide a real alternative, and I think the American people are ready for that. They are sick of the wars, and they know that that has not kept us safer.