These are the words tweeted by Rep. Ayanna Pressley in response to the Israeli decision to ban the entry of Rep. Ilhan Omar and Rep. Rashida Tlaib. The story has a striking resemblance to South Africa and Rhodesia blocking the entry of African American Democratic Representative Charles C. Diggs Junior in January 1972

These are the words tweeted by Rep. Ayanna Pressley in response to the Israeli decision to ban the entry of Rep. Ilhan Omar and Rep. Rashida Tlaib. The story has a striking resemblance to South Africa and Rhodesia blocking the entry of African American Democratic Representative Charles C. Diggs Junior in January 1972 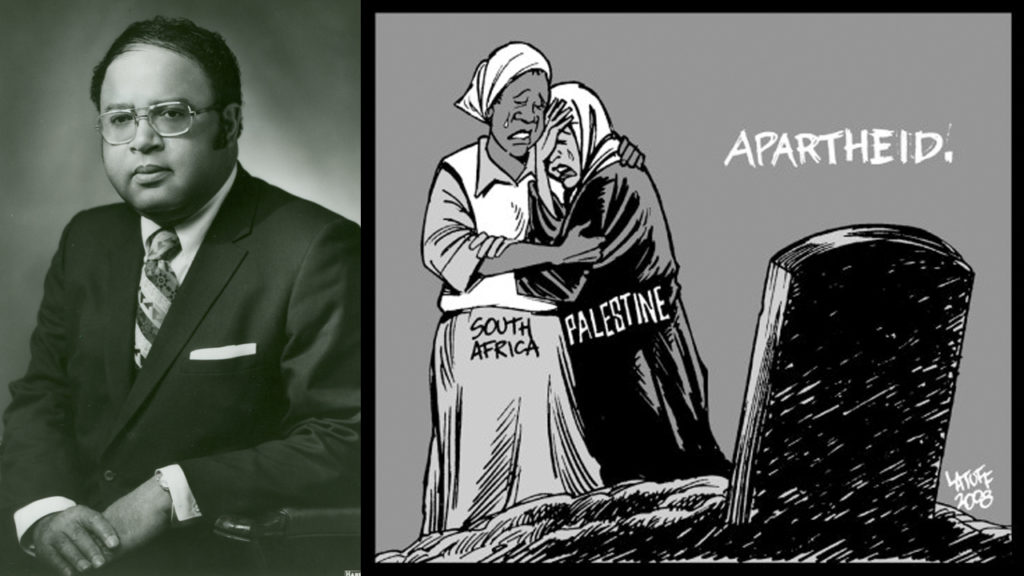 MARC STEINER The travel ban that Israel imposed on congressional representatives Ilhan Omar and Rashida Tlaib heightened the divide between America and Israel. It exposed the contradictions between America’s cherished traditions of liberal thought and freedom of speech and the Israeli colonialist legal system.

TAYA GRAHAM A black member of Congress enlisted the aid of the State Department today in seeking to make the South African government reconsider its decision denying him a visa to Southwest Africa.

MARC STEINER Congressman Charles C. Diggs, Jr. wanted to visit Namibia, but it was under South Africa’s Apartheid occupation. Rhodesia, another Apartheid state at the time also denied him entry. Back in the 70s, political developments were slow, but banning a U.S. congressman was already a sign that the two Apartheid states were coming to an end.

Eight years later, the state of Zimbabwe was founded. It replaced the country that used to be called Rhodesia. Another 14 years passed before Apartheid collapsed completely in South Africa as well. In 2019, political reactions to the Israeli government’s banning of two congressional representatives Tlaib and Omar are creating a much faster and much more negative response. Zionist, as well as anti Zionist Jewish organizations in the United States condemned the Israeli government for banning the congresswomen merely because of their political opinions. Within the Democratic Party, the party of Omar and Tlaib, responses were furious and coming from all corners. It may make it more difficult for any member of the Democratic Party to visit Israel without having to acknowledge the undemocratic underbelly of the Israeli state. Prominent senators and leaders of the Democratic Party spoke up as well. Former Vice President Joe Biden said-

JOE BIDEN (NARRATION) No democracy should deny entry to visitors based on the content of their ideas, even ideas they strongly object to.

ELIZABETH WARREN (NARRATION) Israel doesn’t want to advance its case as a tolerant democracy or unwavering U.S. ally by barring elected members of Congress from visiting because of their political views. This would be a shameful, unprecedented move..

KAMALA HARRIS (NARRATION) It’s an affront to the United States. Open and engaged foreign relations are critical to advancing U.S. interests. Trump is playing politics as he weakens our global leadership..

BERNIE SANDERS (NARRATION) And if Israel doesn’t want members of the United States Congress to visit their country to get a firsthand look at what’s going on, and I’ve been there many, many times, but if he doesn’t want members to visit, maybe he can respectfully decline the billions of dollars that we give to Israel.

MARC STEINER But it seems the younger generation of Democrats spoke out with an even clearer voice. Representative Alexandria Ocasio-Cortez wrote-

ALEXANDRIA OCASIO-CORTEZ (NARRATION) Visiting Israel and Palestine are key experiences toward a path to peace. Sadly, I cannot move forward with scheduling any visits to Israel until all members of Congress are allowed.

MARC STEINER Ilhan Omar herself published a statement discussing her own ban.

ILHAN OMAR (NARRATION) It’s an affront that Israeli Prime Minister Netanyahu, under pressure from President Trump, would deny entry to representatives of the U.S. Government. Trump’s Muslim ban is what Israel is implementing, this time against two duly elected members of Congress. Denying entry into Israel not only limits our ability to learn from Israelis, but also to enter the Palestinian Territories. Sadly, this is not a surprise given the public positions of Prime Minister Netanyahu, who has consistently resisted peace efforts, restricted the freedom of movement of Palestinians, limited public knowledge of the brutal realities of the occupation and aligned himself with Islamophobes like Donald Trump. As a member of the House Committee on Foreign Affairs, it is my job to conduct oversight of foreign aid from the United States of America and to legislate on human rights practices around the world. The irony of the only democracy in the Middle East making such a decision is that it is both an insult to democratic values and a chilling response to a visit by government officials from an allied nation.