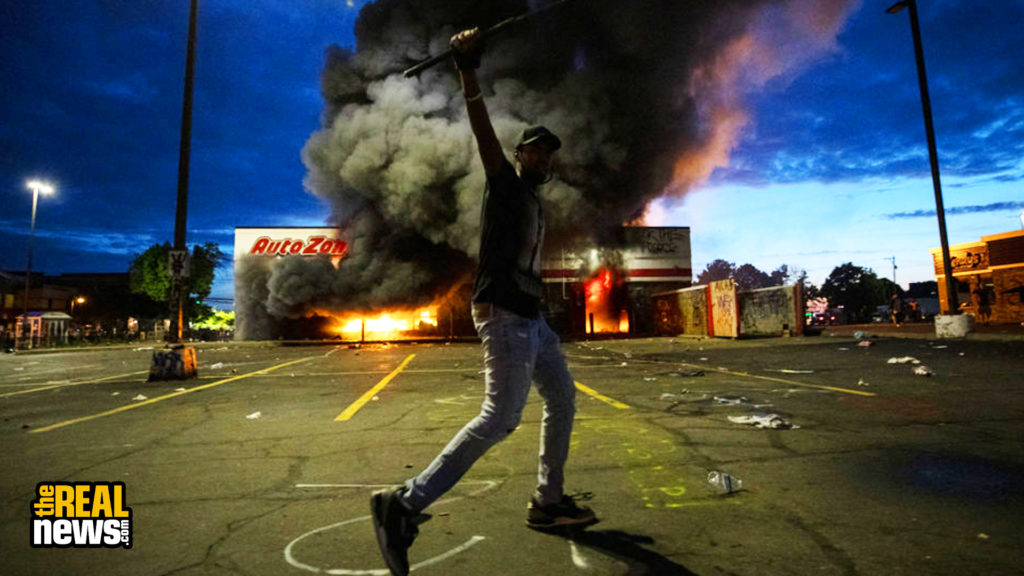 Speaker 1: Right. Just like everybody else. I’m not standing down. I’m black and I’m proud and I’m strong.

Jaisal Noor: Welcome to the Real News. I’m Jaisal Noor. Protests escalated in Minneapolis for a second night as demonstrators across the country demanded justice for George Floyd, a black man killed by Minneapolis police on May 25th. Floyd’s killing was captured in a chilling video. Floyd gasping for breath as a white officer knelt on his neck, he groaned for help and repeatedly said, “Please, I can breathe.”, before going motionless. Protesters also took to the streets to demand justice in Los Angeles, California. All four officers involved in the killing had been fired, but Floyd’s family has demanded prosecutors arrest and charge them. Protestors also point to a justice system that allows police to kill and abuse African-American men and women with impunity. Well now joining us to discuss this is scholar activist, Lawrence Brown. He’s with the University of Wisconsin, Public Health Institute, his forthcoming book, The Black Butterfly: The Harmful Politics of Race and Space in America.

Thanks so much for joining us.

Lawrence Brown: Thank you for having me.

Jaisal Noor: So your response to the police killing of George Floyd police were called on him because he was falsely accused of trying to use a $20 counterfeit check. Worth mentioning, Floyd was among the millions left unemployed during this pandemic, that’s killed 100,000 people.

Lawrence Brown: Really disturbing that five years after the Baltimore uprising and we should mention the Minneapolis occupation of the police station after the killing of Jamar Clark in 2015 as well, America’s come full circle once again. This feels a lot like 1968 in the moment that we’re in right now after the assassination of Dr. King, what scholar Peter Levy calls the Great Uprising. Between 1964 and 1971, there were over 750 uprisings in America, in black communities that we’re trying to respond to a whole legacy of American racism. Then police brutality that kind of caps it off, that sparks the embers leading to many of the uprisings.

And last night we saw responses and protest and rioting in Minneapolis and protests in Los Angeles, shutting down a freeway in Memphis, also confronting police there. And this is all happening in the middle of a global pandemic, dealing with COVID-19. Black communities can’t even try to fight that virus while attempting to also fight the police. And I think that’s the situation where we’re in, where we have seen Ahmaud Arbery, Brianna Taylor, Christian Cooper and his confrontation with Amy Cooper and in Central Park, in New York. All across the nation while trying to halt a global pandemic, black communities are under attack from police and vigilantes that do not respect black people and their lives.

Speaker 2: A potential democratic vice presidential nominee, Amy Klobuchar has come under fire because while she released a statement, demanding Floyd’s killers be brought to justice, as chief prosecutor of Minneapolis, she failed to prosecute officers accused of wrongdoing. While she increased prosecutions overall, she didn’t go after cops, such as the ones I’m involved in Floyd’s killing that were previously accused of wrongdoing.

Lawrence Brown: Yeah, I mean, it ultimately speaks to, I think the hypocrisy in America. I think a lot of Democrats often will try to posture and position themselves as if they’re for justice, but ultimately often pass policies and enact practices that are just as harmful as the ones that Republicans enact and practice as well. And so I think that situation, it calls into to sharp relief the way in which many of the instances where we’ve seen police brutality, the prosecutors, the police, the mayors, they’re often Democrats. The governor during Mike Brown’s killing and the response to that was a Democrat. The mayors in Baltimore, Democrat. Mayors in Minneapolis, Democrat. And so I think sometimes there’s a belief that there’s just one party where the hypocrisy of American democracy is exposed, but it’s really both parties because white supremacy in America is just so baked into the political structure.

Jaisal Noor: So during this pandemic, we’ve seen growing calls to defund the police and defund social services, jobs, healthcare that people don’t have, people are dying for those reasons on a mass scale in this country. I was struck by this tweet by Josie Duffy Rice, president of The Appeal. She said, “Many people in America already exist in a world where police and prisons do not exist. Go to any middle to upper class suburb in America, cops aren’t wandering the streets. People aren’t being arrested, neighbors aren’t being sent to prison. And generally everyone is fine.” And I would add to that go to any white neighborhood in cities too, like right here in Baltimore, it’s the same dynamic here, although some of those neighborhoods have private police forces, it’s worth mentioning. Your response to that.

Lawrence Brown: Well, the reality is America is an apartheid state and urban areas are often areas where apartheid is endemic. Baltimore city created urban apartheid in 1910 when Baltimore Mayor John Barry Mahool passed the first residential racial zoning law in America in December of 1910. So Baltimore, I think, is a perfect example of where you have white communities that are privileged, that don’t experience hyper policing, that have tremendous benefits and capital influx. Well, you have a black butterfly, where black neighborhoods don’t matter, where black neighborhoods are hyper policed in a hyper segregated city. And so Baltimore apartheid is a part and parcel of American apartheid. And I think that is the root of why we are seeing everything from COVID-19 to hyper policing, disproportionately impact and devastate black communities and until America confronts this apartheid construct, then we’re going to continue to see global pandemics, police brutality have devastating impacts in black neighborhoods impacting black people.

Jaisal Noor: And it’s actually wild to see this because in Baltimore you can cross a street and you can enter different realities. It is really shocking to see that. And that’s something that I want to talk to you more about, and I’m going to be reporting on more because I recently got a dog, I’ve been walking through different neighborhoods in the city and it is a sight to really behold. And I wanted to ask you about, you mentioned the uprising in Baltimore after the police killing of Freddie Gray in 2015. Baltimore’s primary election is coming up on June 2nd. What kind of policies are needed to address the systemic apartheid you talked about? There was lots of promises in 2015 that Baltimore is going to do better. That big institutions were going to do better, but fundamentally, many people say that five years later, not enough has changed in the city.

Lawrence Brown: I mean, you’re absolutely right. One of the biggest issues in Baltimore is the fact that it also has an apartheid budget. And what that means is that you have a city that spends more on policing than it does on health, housing, arts, parks, workforce development, and civil rights combined. And there’s no way that a city is going to actually practice and fulfill the promise of racial equity when you have an apartheid budget in place. And so we’ve seen that from Martin O’Malley as mayor to Sheila Dixon, to Catherine Pugh, to Jack Young and I think that’s the reality. And now you have a global pandemic on top of all of this. Now you need a well-funded health department with community health workers, with folks that are able to help stop the rising tide of COVID-19 in Baltimore, which is accelerating as a pandemic within the city.

You can’t do that when your whole budget or a large chunk of it is invested in the Baltimore Police Department. So what we’re seeing in cities like Baltimore and cities like Minneapolis and Milwaukee, these hyper segregated cities in the case of Milwaukee and Baltimore, Minneapolis is only a category two hyper segregated city, but yet and still segregation can be so devastating that statistically sometimes it doesn’t capture the perniciousness of the way in which communities are under resourced and hyper policed. So I think that’s the issue Baltimore is, should look at, can Baltimore dismantle its own apartheid to create a city where racial equity is a reality.

Speaker 2: And Dr. Brown, when you’re talking about is really fundamental change and in Baltimore specifically, and in many cities, there’s growing calls for the public to have meaningful input, to have control of these budgets, because we’ve had politicians promise to change priorities, but it hasn’t happened. Do you think that those kinds of proposals need to become reality? We’re talking about participatory budgeting, where the public gets to actually vote how this money is allocated.

Jaisal Noor: Absolutely. In my book, The Black Butterfly, I actually talk about two ways in which participatory budgeting can be enacted and allow people to have a voice in the budget. And the first way is through a $3 billion racial equity, social impact bond, which would kickstart the rejuvenation of black Baltimore of the black butterfly, in particular, and ensuring racial equity. And half of that would go towards getting toxic lead out of the community. And other parts of that would go towards addressing transit apartheid, banking apartheid, of food apartheid in Baltimore city. And the other piece is also Baltimore neighborhood reparations, where the city would take ten percent of its budget allocate it to the top 20 red line communities. And then in both instances, there should be democratically elected neighborhood councils to help communities decide how they want to spend that money. And that’s participatory budgeting. And that will empower people. That is what will give people a voice and make democracy, as well as racial equity, a reality in Baltimore city. That’s what’s needed to dismantle Baltimore apartheid and help the black butterfly heal.

Lawrence Brown, always a pleasure. [Inaudible 00:12:32] the University of Wisconsin Public Health Institute. His forthcoming book, that we all eagerly await, The Black Butterfly: The Harmful Politics of Race and Space in America. When can we expect that to come out?

Lawrence Brown: It should come out February 2nd, 2021. And hopefully I’ll be able to be there so that I can help talk with folks about what our research and what I’ve found in the book.

Jaisal Noor: All right, Dr. Brown, thank you so much for joining us.

Jaisal Noor: Thank you for joining us at the Real News Network.