Protesters Call for End to Cataclysmic War as Yemenis Starve

Activists from the DSA Anti-War Working Group and Action Corps NYC protested outside the UAE consulate, demanding an end to the US-backed Emirati/Saudi war on Yemen, warning the assault on Hodeida could unleash a famine that starves millions.

Activists from the DSA Anti-War Working Group and Action Corps NYC protested outside the UAE consulate, demanding an end to the US-backed Emirati/Saudi war on Yemen, warning the assault on Hodeida could unleash a famine that starves millions. 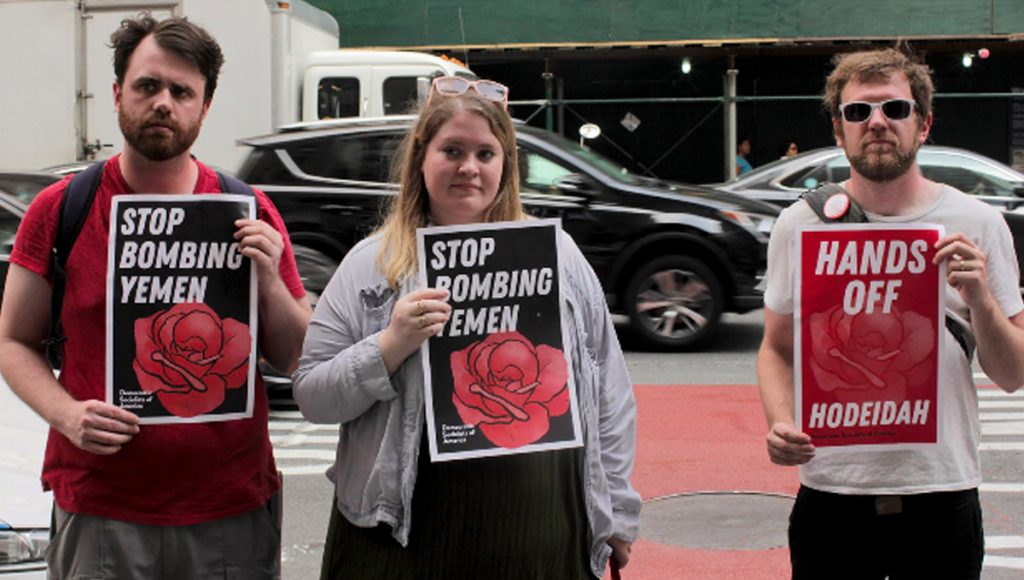 BEN NORTON: Members of the group Democratic Socialists of America and Action Corps NYC gathered outside the United Arab Emirates consulate in New York City to protest the U.S.-backed Emirati and Saudi war on Yemen.

SPEAKER: The Saudi coalition has been blockading and bombing Yemen for the last three years, and has created the worst humanitarian catastrophe in the world. And so we think it’s horrible. We’re terrified that if the coalition takes Hodeida that they’ll use that to prolong the war, and to cut off aid to the northern part of the country, where 80 percent of Yemenis live and where people are incredibly dependent on food and medicine.

SPEAKER: I’m out here because the situation in Yemen is so critical, and they are bombing right now, the United Arab Emirates is bombing the port of Hodeida, where all the humanitarian aid comes into Yemen. Yemen has been in crisis now for years. There’s been millions of people affected by food shortages, and getting aid to Yemen is critical. Why the UAE thinks that bombing is somehow going to solve the situation is, it’s inexplicable. What really needs to happen is to have the United Nations broker some peace arrangements so that aid can get in. This is most critical to the Yemen people. That’s why I’m here.

SPEAKER: I’m here today to show solidarity with the Yemeni people, and to ask elected officials of the United States to withdraw their support from the invasion of Yemen and the assault that’s going on right now. It’s causing mass famine and a gigantic cholera outbreak, and it needs to end immediately.