Mohamed Elmaazi speaks to demonstrators gathered across the street from the Prime Minister's house of residence at No 10 Downing Street, to protest her government's complicity in Turkey's invasion of Northern Syria and attacks on Kurds in the Afrin District, with the intent of carving out a 30 kilometre Kurdish free zone inside Syria

Mohamed Elmaazi speaks to demonstrators gathered across the street from the Prime Minister's house of residence at No 10 Downing Street, to protest her government's complicity in Turkey's invasion of Northern Syria and attacks on Kurds in the Afrin District, with the intent of carving out a 30 kilometre Kurdish free zone inside Syria 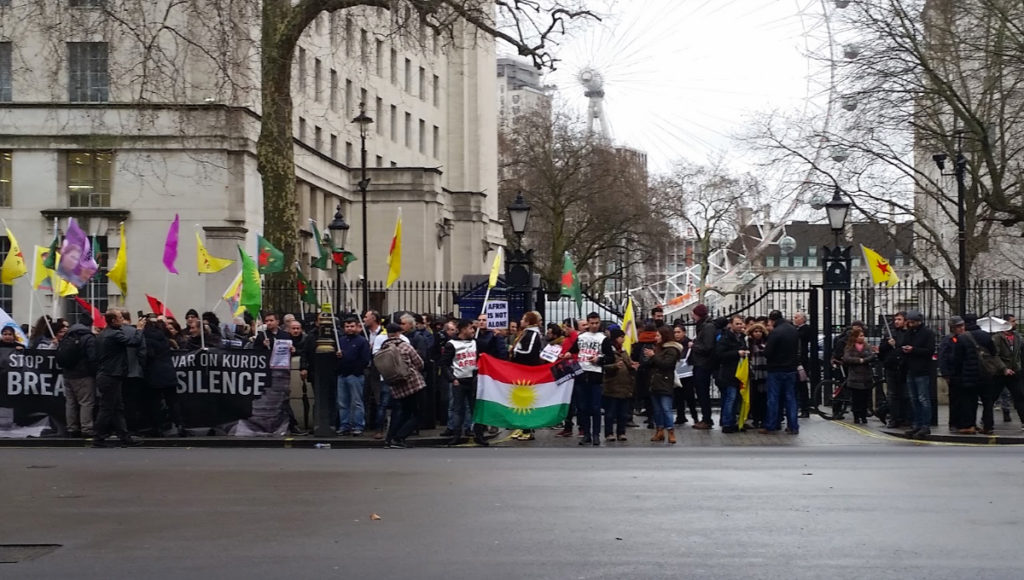 MOHAMED ELMAAZI: Demonstrators gathered outside of the British prime minister’s residence at Number 10 Downing Street in London on Tuesday to condemn what they see as British complicity with the recent Turkish invasion and bombardment of northern Syria, in particular the district of Afrin.

On Saturday, Turkey announced that an air and ground campaign dubbed “Olive Branch” had been launched at 2:00 p.m. GMT, ostensibly targeting the Kurdish YPG, the Syrian Kurdish People’s Protection Units, and Islamic State militants. The operation would be carried out, “with respect for Syria’s territorial integrity,” the Turkish government stated, according to the BBC. A later statement from the Turkish government claims that 108 targets belonging to Kurdish militants had been hit.

Initial plans for this invasion were first leaked last year. On the 6th of June of 2017, ANF News quoted the Turkish deputy prime minister as saying, “Turkey’s idea of a secure zone discussed in the Astana talks will be thus implemented. There is an expectation as well that the Turkish Armed Forces provided security for the Idlib region, and the no-conflict zone is carried out by the Turkish Armed Forces. For all these reasons and Turkey’s border security, the Afrin region will have to be cleared of terror, terrorists and terrorist elements.”

At the demonstration was anthropologist and activist David Graeber, who has previously been to northern Syria.

DAVID GRAEBER: I think it’s really important to pressure the UK government, because this is an incredible embarrassment. They have essentially, they certainly have no reason to justify a Turkish attack which clearly violates those basic Nuremberg principles that aggressive war is the ultimate war crime. And the best they could come up with is they have a right to secure their borders, by which logic, if France wanted to seize Dover, they would have every right to do so.

REX TILLERSON: We recognize and fully appreciate Turkey’s legitimate right to protect its own citizens from terrorist elements that may be launching attacks against Turkish citizens and Turkish soil from Syria.

BORIS JOHNSON: We understand that the Kurds have clearly been instrumental in taking the fight to Daesh and everybody appreciates that and understands it. On the other hand, Turkey does have a legitimate interest in protecting its own borders and its own security.

MOHAMED ELMAAZI: No details or evidence have been provided of any attacks of any kind being launched against Turkey from Afrin or anywhere else within northern Syria.

DAVID GRAEBER: I think the thing which most outraged me is that they are buying the line that these people are somehow associated with terrorists or could even be described as terrorists because of their ideology. The line is the YPJ is an extension of the PKK, and the PKK are terrorists. Well, the only link there is between the YPJ and PKK, the only thing they share is a philosophy. And that philosophy’s a philosophy of grassroots democracy, women’s rights and ecology. So, essentially what they’re saying is these people are terrorists because they believe too strongly in democracy, women’s rights and ecology.

MOHAMED ELMAAZI: And although there have been statements of concern emanating from the Russian parliament and foreign ministry, the Russian government has similarly stopped short of condemnation of the Turkish invasion.

What’s your name and why are you here?

ELIF SARICAN: My name’s Elif Sarican and I’m here as a part of the Kurdish community in the UK to condemn and protest the support given by Theresa May’s spokesman and Boris Johnson to the Turkish invasion of Afrin.

Yeah, we have had many photos and videos come through from our friends in Afrin and it’s a bloodshed. What’s interesting is that the Turkish prime minister and his office or whatever released a 15-point guideline for media in Turkey in how they’re allowed to report about Afrin, and one of those points is to make sure you emphasize that civilians are not targeted and attacked. But we have overwhelming photos and videos that prove that civilians, including a refugee camp of people who escaped ISIS, being bombed and many, many people being killed and affected by the Turkish invasion, including an overwhelming number of children.

MOHAMED ELMAAZI: A rebel commander quoted by Reuters News Agency on Sunday said around 25,000 militants fighting under the banner of the Free Syrian Army would also back Turkey in its campaign to capture YPG-defended towns and villages. These militants have begun moving into the area, according to the Turkish state-run news agency.

As the shelling continues into its fourth day, the Turkish government claims its objective is to create safe zones inside Syria free of Kurds and the YPG that is 30 kilometers deep. According to a statement released on Monday from the Movement for a Democratic Society, the umbrella organization of political and social movements in northern Syria, “The Turkish army targets civilian cars driving on the border in addition to targeting archeological sites in Bulbul district. After suffering loses on the border following clashes that broke out with the YPG, Turkish aircrafts began again targeting the vicinity of Afrin city and Mobata district. According to YPG general command, four Turkish soldiers and 10 proxies were killed. Within the last two days, Turkish warplanes have massacred nearly 20 people, most of them children.” The release continues to state that among the victims are, “eight people from an Arab family who fled Idlib and settled in Afrin because of the war.”

I asked Elif Sarican what she thought about the suggestion that the invasion may have been triggered by the desire of the US to form a 30,000 troop border force with the Syrian Kurds.

ELIF SARICAN: Firstly, the 30,000 strong border force that the US intended to create with the YPG-led Syrian Democratic Forces is on the eastside of northern Syria, so it’s on the northeast. Afrin is on the northwest of Syria, so that border force wasn’t intended for Afrin anyway. So, in what way this could’ve necessarily be a justification for Erdoğan? In no way, of course. Could this be one of the reasons that triggered Erdoğan to finally invade Afrin that he’s been threatening for way too long? Yes, this could be the trigger but nevertheless it’s still a genocidal, fascist invasion.

DAVID GRAEBER: The Turkish military’s extraordinarily weak and Erdoğan is the strategic genius of someone like Adolf Hitler. I mean, he’s an idiot. He’s has delusions of grandeur but he’s destroyed the army. I mean, I’ve heard that a large percentage of the pilots who are in bombing raids right now in Syria, the Turkish pilots, are actually under house arrest, and they let them out to do bombing, and then they put them back again. These are entire officer corps, the good ones anyway, are in jail, purged. They have ideological loyalists in charge and these guys know nothing.

On the Kurdish side, on the other hand, you have 20, 30 years of tactical experience. I mean, these guys are the best on the ground there is. They’re literally running circles around the Turkish forces. So, I think that this is Custer’s last stand all over again, just pure vainglory, arrogance and blindness driving them into a rout. I mean, they can cover it up for a while but before too long it’s going to become obvious, even to people in Turkey, that they had their asses handed to them. And the repercussions in Turkey itself are likely to be enormous.

MOHAMED ELMAAZI: The people of northern Syria who are fighting to establish a socialist grassroots democracy will not be able to depend on any of the great powers for help. For The Real News Network, this is Mohamed Elmaazi in London.