Pope Francis to Big Oil Executives: ‘There is no time to lose’ 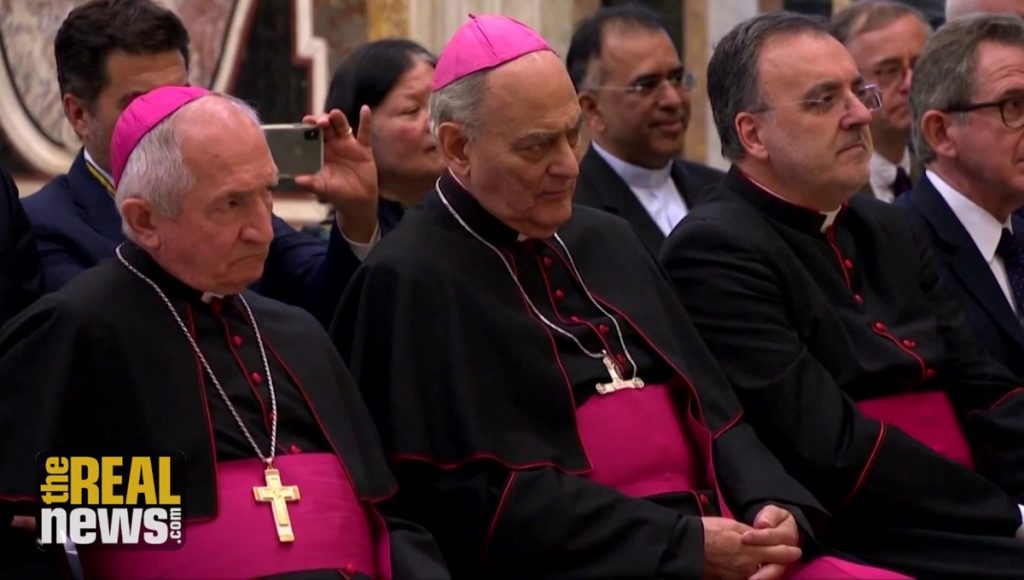 DIMITRI LASCARIS: This is the Dimitri Lascaris, reporting for The Real News from Montreal, Canada.

Analysts estimate that at least two thirds of proven coal oil and gas reserves need to stay in the ground to meet the Paris Climate Accord’s goal of limiting the global temperature increase to 2 degrees Celsius. Nonetheless, the fossil fuels industry continues its ravenous search for new reserves of fossil fuels, often with the enthusiastic support of Western governments. This past week, Pope Francis addressed this glaring contradiction at a two day conference in the Vatican. His audience included the heads of Exxon Mobil and BP. Three years ago, Pope Francis authored a remarkable call to action to confront the climate crisis known as the Laudato Si. This past Saturday, the Pope reiterated his call to action, telling the titans of Big Oil there is no time to lose.

Now here to discuss this with us is Dan Dileo. Dan is assistant professor and director of the Justice and Peace Studies at Creighton University. His research focuses on Catholic social teaching and climate change, with particular focus on the Laudato Si. And since 2009 Dan has served as a consultant project manager at Catholic Climate Covenant, which partners with National Catholic organizations to educate and advocate around Catholic teaching on climate change. He joins us today from Omaha, Nebraska. Thank you for coming onto The Real News, Dan.

DAN DILEO: Thanks for having me, Dimitri.

DIMITRI LASCARIS: Dan, let’s start with the Pope’s ecological encyclical Laudato Si. How Does the Pope tie the imperative to act on climate change with the teachings of Catholicism?

DAN DILEO: Sure. Well, I think it’s, I think it’s first of all important to emphasize that what Francis is doing is, in many ways, not new. It’s not radical, it’s not unorthodox. This is nothing new for the Catholic Church. In 1990, Pope John Paul II, Now Saint John Paul II, first addressed climate change is a moral issue. So this is something that the Catholic Church has been concerned with for decades.

And it has to do with a couple of different reasons. Number one, Christians have a commitment to care for God’s good gift of creation, or as Francis says, our common home. And so climate change violates that commitment to care for creation. But it also violates the commitments of the Catholic Christian tradition to protect human life and dignity, to protect the poor and the vulnerable especially. And that’s all by virtue of the fact that we are creatures. We are part of the natural world, and what happens to the, quote-unquote, environment inevitably happens to us. So for all of the reasons that the church has committed to its social tradition, the church is concerned, deeply concerned, about climate change and has been for decades.

DIMITRI LASCARIS: And so just to go back to my question, in terms of the underpinnings of Catholicism, how has the church, not just Pope Francis but his predecessors, tied the, the imperative to fight climate change to the fundamental principles of Catholicism?

DIMITRI LASCARIS: And why do you think this particular meeting with Pope Francis and these representatives of major oil corporations is significant today?

DAN DILEO: I think it’s significant for a couple of reasons. I think number one it’s significant because the church has a unique message. You know, we can talk about all the different economic issues here, we can talk about the different sociopolitical dimensions. But at its core for the Catholic tradition this is a moral issue, and that’s something that I think is over overlooked oftentimes in conversations about climate change.

I also think we have a unique messenger in the person of Pope Francis, that by both people of faith and goodwill he’s recognized as as a moral figure, as an authentic, as an authoritative, authentic moral voice. So I think that makes this meeting unique. I think it’s unique, also, because not only is it bringing together executives, but it’s bringing together investors, people who have the capacity to provide the financial resources for a transition towards a truly carbon neutral economy. So you’ve got companies, but you’ve also got financiers.

And I think it’s unique because these are the people who have an extraordinary amount of power to help obstruct or to help facilitate a rapid transition to a clean energy future that we know science is saying we need to rapidly achieve in order to avoid a truly climate crisis. So I think it’s significant for a lot of different reasons.

DIMITRI LASCARIS: And how, Dan, has in your view the head of Catholic, major Catholic institutions, including institutions that are invested in the markets, responded to Pope Francis’ call for action in the encyclical?

DAN DILEO: Sure. So I think it’s important to frame the response and the conversation in the understanding that in the Catholic tradition, broadly, the social mission always emphasizes both charity and justice, and charity is understood as the local immediate actions to address the system, to address issues that are going on. But justice is attention to the systems and the structures and policies that create the conditions whereby charity is necessary.

So in response to your question, I think the church and its institutions have tried to look at climate change on both counts. So places like colleges and universities, hospitals, dioceses have tried to look at their own energy consumption. They’ve tried to look at their own waste management practices, things like that. But at the same time, the church recognizes that that’s not enough. We also have to step out and advocate in the public square. And so the U.S. Conference of Catholic Bishops, for example, has been emphatic in its support of the Clean Power Plan and in support of the Paris agreement. So I think the church has done a lot on both charity and justice in response to the encyclical.

DIMITRI LASCARIS: And lastly, I’ve seen some suggestions in the media and polling that, although liberal Catholics have responded quite positively to the Pope’s call to action, there’s a segment of the Catholic community, particularly perhaps those on the right of the political spectrum, that remain skeptical of human-caused climate change and the urgent need to address it. Has has the Pope’s call to action encountered some resistance from right-leaning segments of the Catholic community? And if so, how’s the leadership of the church responding to that resistance?

DAN DILEO: Well, I think it’s important to remember that Catholic social teaching and the social tradition of the church doesn’t fit into any political boxes. It transcends any attempt to to look at it according to fault lines, or lines in the sand, and things like that. So I think on any issue you’re going to encounter some folks who exercise prudential judgment and say, well, I’m not so sure about this, or I’m not so sure about that. And I think Laudato Si and climate change in particular are no different.

At the same time, I think there’s a growing recognition that across the political spectrum climate change implicates all of the issues that people care about, whether it’s national security, whether it’s a commitment to human life, whether it’s immigration. I think there’s a growing recognition that’s led, in part, by, by the leaders in the church that no matter where you fall, climate change is truly the, the overarching issue that touches, really, any other concern. So I think in that regard people are really starting to see the connections, which is a thread of Laudato Si, that everything truly is connected.

DIMITRI LASCARIS: We’ve been speaking to Dan Dileo, assistant professor and director of the Justice and Peace Studies department at Creighton University, about an important new meeting with Pope Francis and leaders of the fossil fuels industry. Thank you very much for joining us today, Dan.

DIMITRI LASCARIS: And this is Dimitri Lascaris, reporting for The Real News from Montreal, Canada.